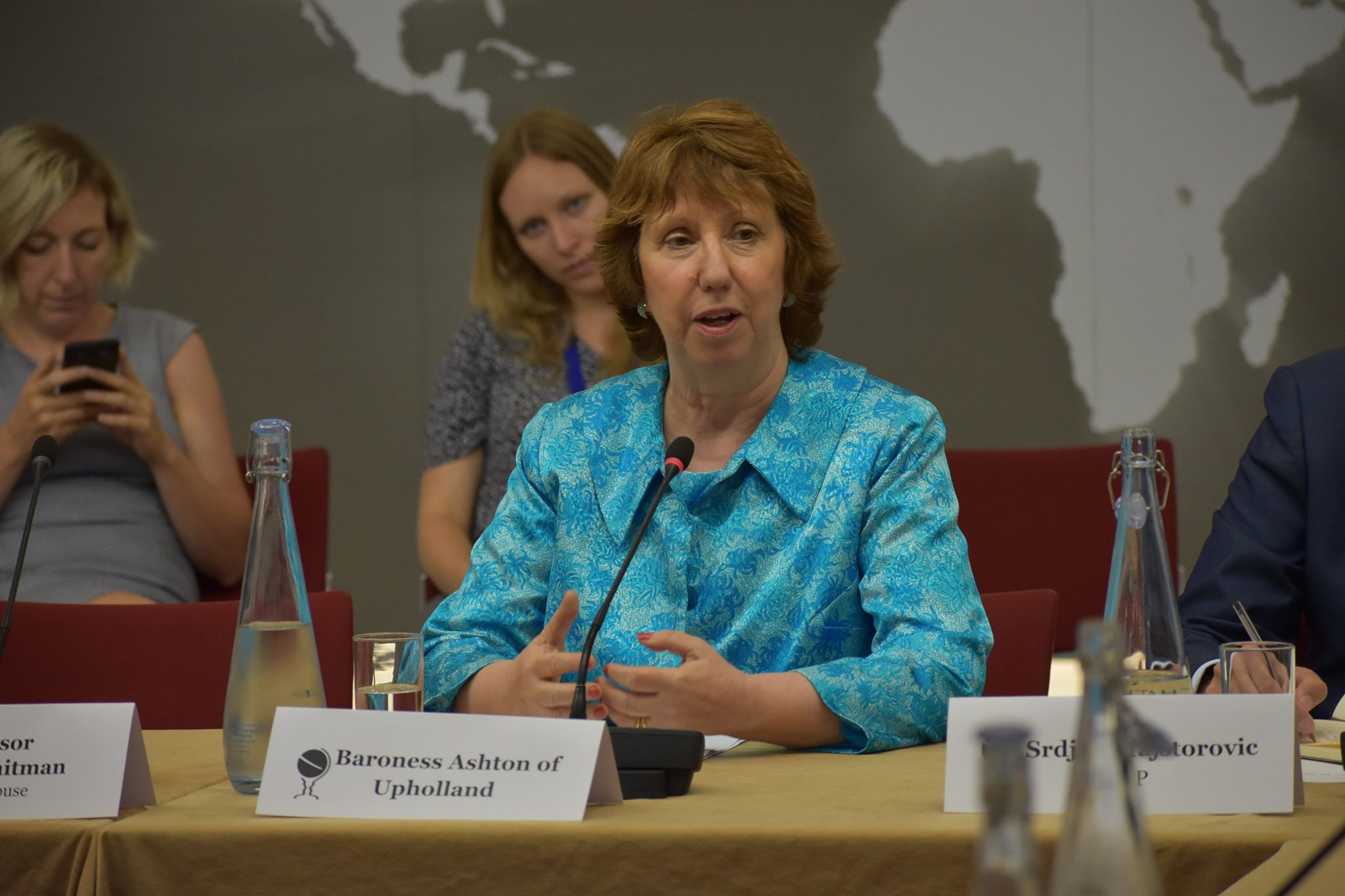 LONDON – According to Catherine Ashton, Senior Adviser at Chatham House and the former EU High Representative of the Union for Foreign Affairs and Security Policy (2009-14), the European Union needs to be clear that membership will be the outcome for Western Balkan countries if they undergo the neccesary reforms.

Ms. Ashton, who will be a keyonote speaker on the event “Beyond Berlin: What Does the Next Decade Hold for the Western Balkans?”, organized by Chatham House, European Fund for the Balkans and DG Near in London on 10 July, at the margins of the London Western Balkans Summit, shared with EWB her views on the European perspective of the Western Balkans and the Belgrade-Pristina dialogue, which she mediated during her time as EU High Representative.

Commenting on the Brussels Agreement of 19 April 2013, considered to be a major breaktrough in the Belgrade-Pristina dialogue, but which still remains to be fully implemented after 5 years, Ashton states that the Agreement needs to be “implemented in full”.

“Our purpose in the Brussels Agreement of April 2013 was to improve the lives and opportunities for the people of both Serbia and Kosovo. We recognised that the future of both lay in the European Union and this first agreement was to help them resolve problems and make changes which would help them move forward”, states Ashton.

According to Ashton, “it should be implemented in full and they should continue to work together – including President Vučić and President Thaci who have established an important working relationship.”

Most experts agree that the Belgrade – Pristina dialogue was conducted using the principle of “constructive ambiguity” where the agreements were left ambigous and interpreted differently by the two sides. While some see that as an advantage that opened the possibility of the dialogue in the first place, others criticize it for making implementation a lot harder.

According to Ashton, “each side brought to the discussions their own red lines – areas that they could not cross – and we respected them.”

As she explains, “it still enabled progress to be made. How they finally interpret their relationship must be for them to pursue.”

Currently the most important question that remains to be anwered when it comes to normalization process between Serbia and Kosovo is what exactly is the “comprehensive normalization” and what does it entail.

According to Ashton, “there are different views and different ideas and language get regularly thrown around to add to the confusion or sometimes to make things harder. The word “partition” is one of them. This shouldn’t deter the process.”

As she explains, “there are many countries urging them on to success and willing to help. We all want outcomes that makes sense, are respectful of each other and in the best interests of the people.”

Asked about the European perspective of the Western Balkans, having in mind the encouragement by the EC Strategy and the 2025 prospective enlargement date, but also the discouragement with the recent French position on the neccesity of EU reform before enlargement, Ashton says that the EU needs to be clear that EU membership is the outcome for Western Balkan states.

According to Ashton, “the EU has been clear that the Western Balkans nations should be members but that requires each and every one to comply with the rules that have been set out and to deal with reforms properly. It isn’t easy, but it is necessary.”

However, Ashton believes that “while the EU is clear and tough on this, they also need to be clear that membership will be the outcome, not least to prevent some becoming discouraged.”

Addressing the comment that the gap left by the EU in the region could be exploited by external actors, Ashton states that “while outside influences have always been part of the Western Balkans story, it is in the EU interests to be clear and direct on the future.”

Dimitrov: Macedonia to begin negotiations with NATO this week

On Poznań Summit: It Is Time to Deliver Together