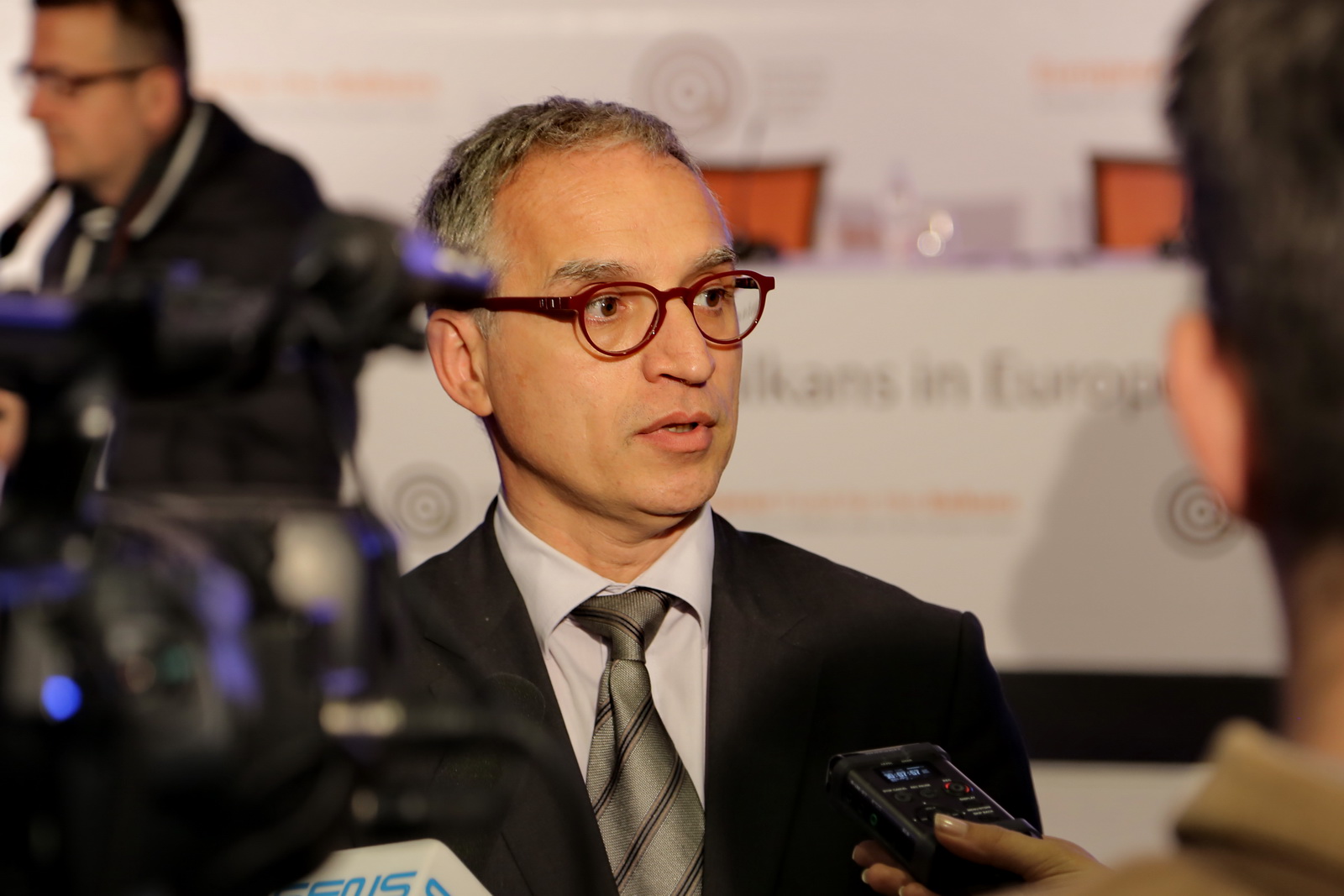 Interview with Goran Svilanović, Secretary General of the Regional Cooperation Council (RCC). Svilanović mandate at RCC will expire at the end of 2018, after more than 5 years in office. He was previously the Foreign Minister of Yugoslavia (2000-2004) and co-ordinator of OSCE Economic and Environmental Activities.

European Western Balkans: You have been at the head of the Regional Cooperation Council for 5 years, and it was announced you will leave the office at the end of 2018. How do you see the most important successes of the RCC during your time as Secretary General?

Goran Svilanović: Making RCC inclusive was perhaps the most important to achieve during these years and it was possible thanks to cooperative attitude of the government of Serbia as well as of all other participants of RCC.

Closely cooperating with all of them, including with the European Commission, I believe I helped making not only RCC, but our political framework, namely the South East Europe Cooperation Process, all inclusive. This later transferred to other regional organisations.

At the end of 2013, all participants agreed on the SEE 2020 Strategy, prepared by RCC, which was directly linked with the Europe 2020 strategy, and later on was incorporated into Economic Reform Programs of the Western Balkan economies. SEE 2020 Strategy served as a basis for the Multiannual Action Plan on Regional Economic Area (MAP REA), fully drafted by RCC and endorsed by the prime ministers in the Trieste summit of the Berlin Process.

In the last EC Strategy for the WB, issued on February 6 this year, RCC is positioned as a leading regional organisation, directly engaged in the accession procedure through the implementation of MAP REA.

EWB: What do you see as the most important challenges to regional cooperation? There are several regional initiatives, including the Berlin Process, but it seems that the actual progress is very slow, and most citizens find it hard to see concrete benefits. What should be done to improve this?

GS: Coming to terms with the responsibilities and with the consequences of the wars in the process of the splitting up of former Yugoslavia is by far the biggest obstacle for regional cooperation in the Balkans. And this includes not only countries emerged from the former Yugoslavia, but our partners from Europe and beyond.

It will be so as long as we are not able to put aside war criminals, exclude them from our societies, and then jointly and with no discrimination of any sort express condolences to the victims and their families, to say how sorry we are for tens of thousands of those who lost their lives.

I do not underestimate the Berlin Process. It brought us many steps closer to what I just described. It started with the transport and energy connectivity in Berlin, continued with the civil society engagement and the declaration regarding bilateral disputes in Vienna, put into the spotlight the youth in Paris and provided for the inception of the regional economic area in Trieste.

Now in London, ministers of interior have agreed on exchange of information, joint fight against corruption, arms smuggling and human trafficking. They have agreed to form Steering Group to monitor the implementation of these commitments. More importantly, prime ministers have personally signed, together with their EU colleagues three joint declarations, namely on regional cooperation and good neighborly relations, on missing persons and on war crimes. We should all be aware that we will be reminded on what has been signed in every next country report prepared by European Commission.

Finally, as you have pointed out, our citizens expect something more visible from the Berlin Process, besides family photos and the declarations. There, while agreeing, I would like to say that EU has made available hundreds of millions of euros so far and we all are expecting to see these highways, railways and energy interconnectors being built. This would hugely add to the visibility of the Berlin Process and would make this picture of EU relevance for the region, crystal clear.

EWB: How do you see the European perspective of the Western Balkan states? There has been encouragement with the Western Balkans Strategy and the famous date of 2025, but also “cold showers” with the statements by French President Macron and the lack of enlargement desire in some EU member states, evidenced by hesitation when it comes to opening negotiations with Macedonia and Albania.

GS: Leaders of the EU should manage the change of EU more decisively. We do not know today what EU we should join tomorrow. “What EU” is more of a question for me than “when” is this going to happen? We in the Balkans need years to improve both economically and in particular when it comes to respect for a rule of law.

I have no doubts that we can do it. We can and we will function as the average EU member states. Economically, GDP wise, employment wise, we are getting closer; there are encouraging figures, particularly in Montenegro and in Serbia. But, more should be done in strengthening the performance of judiciary, of our governments and independent institutions; much more in encouraging critical media.

EU is constantly underestimating the relevance of setting the dates for achieving certain benchmarks. Therefore, I would insist on clear commitments on both sides, our countries and EU. This goes for the 2025, or any other date as a horizon.

After President Juncker stated that 2025 is possible horizon for the accession of Serbia and Montenegro, RCC has noted in the Balkan Barometer Report, which we have just published, visible increase of support for EU accession in Serbia, visible drop of negative emotions, and cynicism, open endorsement of EU values among the people.

Therefore, while considering badly needed reorganization of the Union, while engaging in the change of the EU, leaders of the EU should constantly keep the doors open for the WB, but should not shy from setting the benchmarks for every step on the way, including the very last one. I do understand the sensitivity of the accession in the eyes of the EU citizens, but EU need bold geopolitically, economically, socially and culturally based decision in favor of integrating Balkans within foreseeable time frame, we could believe in.

EWB: Which are, in your opinion, the most significant challenges the Western Balkan countries face on their path towards EU membership? There are many who consider rule of law to be crucial, but significant attention is also given to bilateral disputes and political obstacles.

GS: Transition process, reforms and accession process, all lasted far too long and brought only limited results when it comes to the substantial transformation of our societies. Therefore, we are faced with the depopulation coupled by the exodus of the talent from our countries. To me, this is the most dramatic problem in the region.

Besides, we need to redesign our education system and labor market, in order to make a balance between two opposing needs. We do need to educate the new professional and specialised labor in order to be able to continuously provide for the needs of increased investments and at the same time, we have to be aware that the only real opportunity for substantial growth lies in highly educated sophisticated new generation which would be able to lead us into the fourth industrial revolution. That would mean investing in science and IT, creating new technical, scientific and human intelligences. In my eyes this is the second challenge.

The third one is related to the increased social division of our societies; the gap between rich and poor, educated and non-educated, majorities and minorities. We have done far too little to increase level of social cohesion, far too little to include women into every level of decision making process, to unleash their economic and social potential. Same goes for Romas and other minorities in our societies.

And finally, I do agree with you, rule of law state we still dream of. I am not idealising societies in Europe, particularly having in mind the new right wing Europe, but I do respect the level of decency of EU states, European social model we are still striving for.

Therefore, last, but not the least, I would like to mention the need to improve governance of each and every economy in the Western Balkans. Those who are leaving us these days, young and not young any more, they are leaving not only because of the lack of jobs or because of poverty, they are fleeing as they do not want their children to live in the societies which are not offering decent education system, decent justice system, decent health system. They are looking for European values implemented now and here, immediately. As we fail to do so domestically, they leave and live these values elsewhere.

EWB: Do you believe there is a genuine desire by Western Balkan leaders for European integration and Europeanization of their countries?

GS: Well, what we have learned from the RCC Balkan Barometer 2018, the push to join the EU from the broader public in the Western Balkans is not as strong as one would think. So, the enlargement fatigue among the citizens or politicians of the EU member states, is not the only problem we are faced with. It is also that we have a problem with societies which are tired of unfulfilled promises coming by their leaders and by their partners in EU.

We really are in need of a credible European perspective and this justifies the name of the last communique which came on February 6. At this point in time and in the years to come we will be in need of deeds which would reinvigorate European dream in the Western Balkans. There, we are all together: citizens of the Balkans, domestic politicians and their partners in EC and in particular leaders of new and redefined EU.

EWB: Where do you think your successors at RCC – Maljinda Bregu and Igor Lukšić – should focus the work of the organization in the years to come?

GS: Ms. Majlinda Bregu is experienced politician and she will have plenty of opportunities to increase the relevance of RCC through full implementation of the Multiannual Action Plan on Regional Economic Area.

Besides, I trust she will have many more ideas where to put her own and the efforts of the Regional Cooperation Council team, as the largest and the most relevant inter-governmental regional organisation in the South East Europe and in the Western Balkans, while deciding on the post SEE 2020 agenda.

Mogherini: Skopje sets a positive example for the entire region

Our First Five Years with You