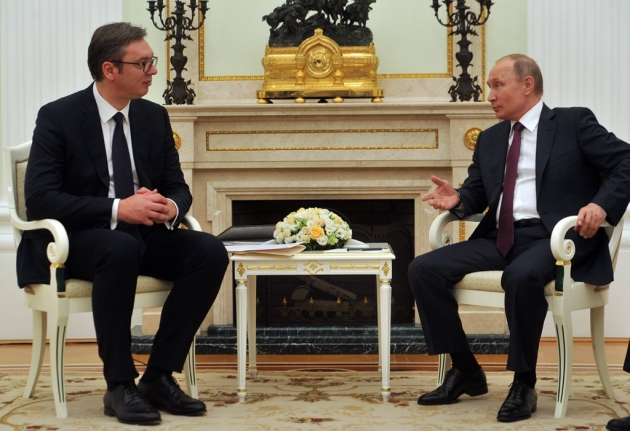 Aleksandar Vučić and Vladimir Putin; Photo: The President of the Republic of Serbia

LONDON – The development of closer ties between Russia and Serbia during the last decade is not the result of a largely overestimated “centuries-old alliance”, but purely modern, “Putin-era foreign policy”, as well as the power vacuum present in the Balkan since 2008, writes Vuk Vuksanović for The American Interest. The US and the EU should therefore act more decisively if they are to keep Serbia, without which the stability in the region can not be reached, on a pro-Western path.

“By backing Serbia on issues like Kosovo, the Kremlin believes that it gains support and influence in the Balkans cheaply. Without needing to invest significant effort or resources, Moscow can oppose the West in its own backyard—a “win-win” for Putin”, emphasises Vuksonović, Research Assistant and a PhD Candidate at the London School of Economics and Political Science.

However, Russia’s presence in the region has its limits – it withdrew its peacekeeping forces from Bosnia and Kosovo already in 2003, and its economic ties with Serbia pale in comparison with those this country has with the EU, which is, apart from energy sector, the largest investor and employer in Serbia.

“Russia will continue its current policies for as long as it can, but it is aware that the Balkans will remain anchored to Europe. This means that there are limits on how far Russia will go”, claims Vuksanović.

Why, then, Serbia chooses to develop closer ties with Russia? One of the reasons is the power vacuum in the Western Balkans that has been triggered by the 2008 economic crisis, and then deepened by Euro crisis, migration crisis and Brexit. As the question of whether Serbia will ever join the EU becomes more and more prominent, the actors from the Union and the US government have, until recently, ceased paying close attention to the Balkans. This has created an incentive for Serbia to begin accepting overtures from non-Western players—not only Russia, but also Turkey, China, and the UAE.

However, the power vacuum is not the only reason. “Russia’s popularity is the result of a Serbian emotional backlash against Western policies in the 1990s and the independence of Kosovo. It is not the product of emotional ties from the past. Another reason why the Serbian government has kept the Russian option open is so as not to alienate pro-Russian segments of the Serbian electorate,” the article underlines.

The calculations from the current Serbia’s power-holders also play a role. “The Serbian government keeps a Russian option alive as leverage over the West, and to avoid criticism for a downward trend in democracy and the rule of law, as the political scene remains dominated by a single man ([president of Serbia Aleksandar] Vučić) and freedom of the press continues to decline”.

The question of Kosovo is the final major reason for Serbia’s government increasing closeness to Russia. Every settlement of the issue which would include Serbia’s recognition of statehood to what it claims is its southern province will be unacceptable to the majority of the electorate. As long as the more favourable solution is not found, Serbia will require a patron that would stand for its interests, which it can not currently find in the West. Russia, because of the above-mentioned reasons, is useful in that role.

With all of this being said, the West needs to accept that the ties between Serbia and Russia stem from recent (geo)political interests, and not Serbs are not “Little Russians”, concludes Vuksanović. This would encourage the pro-Western actors in Serbia and pave the way for a stable and re-integrated Balkans, a goal the EU must see as a priority.

Macedonia: Government’s Plan 18 to be transformed into Screening Plan

Hahn: A lot of work ahead of WB countries, especially BiH and Kosovo; influence of China worrying