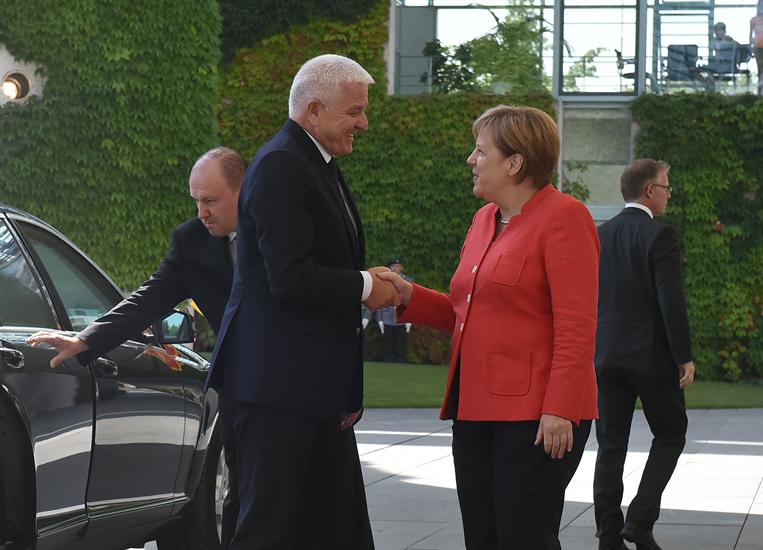 PODGORICA – German Chancellor Angela Merkel, in yesterday’s meeting with the Prime Minister of Montenegro, Duško Marković, reiterated Germany’s support for the European future of the Western Balkans, as long as bilateral conflicts are resolved and territorial integrity respected.

Expressing her satisfaction with the results Montenegro has achieved by gaining full NATO membership and reaching high level of concretisation in the EU-membership negotiations, Chancellor Merkel stated that these talks are a clear confirmation of Montenegro’s and Western Balkans’ European perspective, which should be based on territorial integrity of all countries, and rather be dependent on satisfying all membership conditions than on a timetable.

She emphasised the importance of ending all bilateral conflicts, in order to create a possibility of cooperation within the EU. In that regard, Merkel said the conversation also concentrated on the issues that have to be solved in Montenegro, such as rule of law, fight against corruption and the organised crime.

Confirming the readiness of Germany to offer council to Montenegro in the next phases of the process, Chancellor emphasised that “from today’s conversation I gathered that Montenegro has a great ambition to be successful, and Germany is in favour of its European perspective and we will help it to get there, rather than creating obstacles”.

Thanking the Chancellor and German government on the comprehensive support to Montenegro’s foreign policy priorities and Euro-integration ambitions, Prime Minister Marković said that Germany, as a key partner for Montenegro and the whole region, understands his country’s needs and sees region’s inevitable future in Europe. In that context, Prime Minister Marković assessed that Berlin Process “raised the quality of our European vision and our European perspective, improved the dialogue in the region and helped us create capacities for solving open question on our own, without just bringing it to our partners’ table”.

Talking about bilateral cooperation on political level, Prime Minister said that “Montenegro is ready to apply and respect standards when it comes to development of democracy and political system. In that regard, we spoke about our temporary imperfections and weaknesses when it comes to fight against corruption and organised criminal. We enhance our institutions, reinforce them to achieve more in that field and that rule of law is not limited to Montenegro’s development and its European perspective”.

“I personally, and this government, are ready to make further steps in that direction. We asked the Chancellor for the support of experts, and we received it, and I believe that we will soon have a new counseling position in one of our departments that tackles the issues of fight against organised crime and corruption”, he concluded.