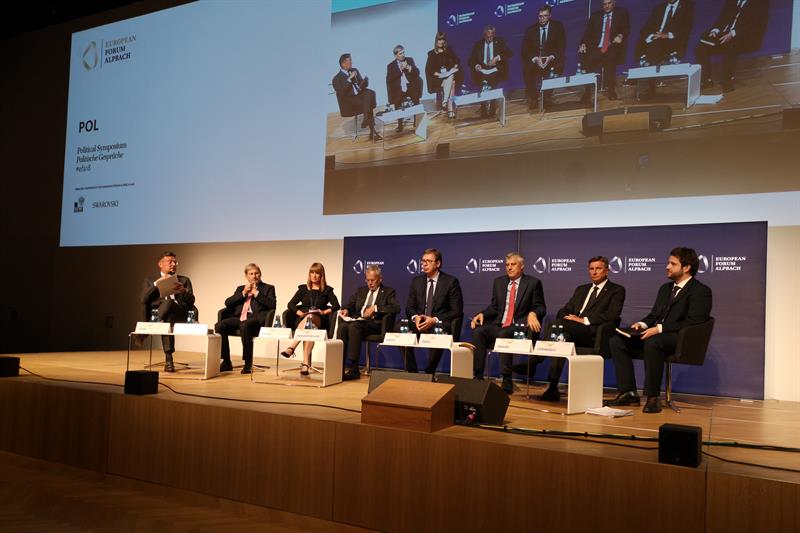 ALPBACH – Presidents of Kosovo and Serbia, Hashim Thaçi and Aleksandar Vučić, together with EU representatives, politicians and experts, participated today in a panel entitled “New perspectives on EU enlargement”, organised by the European Forum Alpbach. The conversation revolved around their recent proposal for a border correction as a lasting solution between the two countries.

“Kosovo is determined to reach a binding legal agreement. Time for it is now. It is very difficult and therefore we need everybody’s support. We have decided to explore every possible option”, stated Thaçi, reminding that the third meeting of what he called the “final stage” of the EU-facilitated Belgrade-Pristina negotiations will take place on 7 September.

“Countries in the region should not be afraid of a possible agreement between Kosovo and Serbia even if it includes border change. It will not be a correction along ethnic lines – Kosovo will continue to be a multi-ethnic country and to support minority rights”, emphasised Thaçi.

President Vučić used the occasion to point at the existence of a dispute among the international community about where the borders of Serbia and Kosovo are: “Half of the world says Kosovo is an independent state, other half recognizes only Serbia.”

“Nobody asked Serbs and Albanians about the borders. I am doing everything to secure the future of Serbs”, said Vučić, adding that Thaçi and himself want to avoid clashes and wars.

Asked by the panel moderator Florian Eder, managing director of POLITICO in Brussels, about whether his country would recognize Kosovo after a potential land swap, Vučić did not give a clear answer, returning to the issue of disputed borders.

President Thaçi also missed the opportunity to further clarify his position, stating that he is in favour of border correction because the present situation, characterized by him as “frozen conflict”, is not desirable.

Also present at the event was Johannes Hahn, European Commissioner for European Neighbourhood Policy and Enlargement Negotiations. He underlined that, whatever the solution for future relations between Kosovo and Serbia is, its overarching theme should be regional stability.

“It should not trigger any additional ideas in the region. The international community should be convinced that the solution is tailor-made so that it guarantees stability”, said Hahn.

He reiterated his opinion that “EU should export stability, and not import instability”. This is a crucial condition, he explained, for convincing EU citizens that the Union should accept more members.

He also repeated his statement regarding French President Emmanuel Macron’s position that EU should reform itself before any future enlargement, saying that these processes can be conducted in parallel.

President Van der Bellen welcomed the intensifying EU-Western Balkans relations, highlighting the most important achievements since the start of the year: Commission’s new Enlargement Strategy, Sofia Summit, name deal between Macedonia and Greece and further normalisation of relations between Macedonia and Bulgaria. He also reminded about the possible opening of negotiation chapters with Macedonia and Albania next year.

“It is worthwhile to keep this momentum going; the odds are currently favourable for the enlargement. EU is not complete without the Western Balkans”, emphasised Van der Bellen.

President Pahor, referring to the demarcation issue between Slovenia and Croatia, criticized the EU for failing to insist on the implementation of the agreements once they are reached with great difficulty. He made clear that such practice should not continue in the future.

The panel was opened by two young experts, Tena Prelec, research associate at the London School of Economics Political Science, and Adnan Ćerimagić, analyst at the ESI – European Stability Initiative from Sarajevo.

Anticipating the overarching theme of the panel, Prelec addressed the rising economic inequality in the region, especially Serbia and Bosnia and Herzegovina, as well as emigration, as the issues that require more focus.

Youth is losing belief in the meritocracy, she explained. They are facing only two options – being a part of the corrupt system or leaving, and many are choosing the second one. EU membership does not solve this problem. In fact, the number of emigrants from Croatia was multiple times higher in 2016 compared to 2011.

Ćerimagić urged present regional leaders to oppose the narrative of ethnic divisions. He described the tragic consequences the idea summarized by the sentence “You are only safe when your ethnic group is control” had for former Yugoslavia.

There should be no more changes of borders along ethnic lines in the region, Ćerimagić concluded.

Bolton: Territorial correction is an option if both sides agree