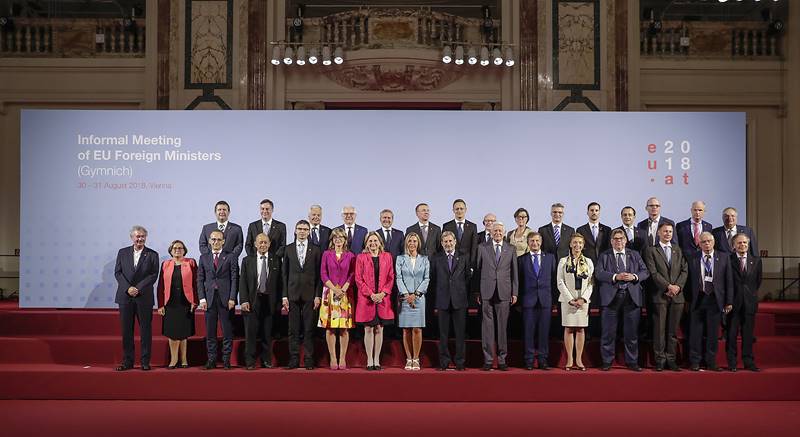 The discussion revolved around EU’s Common Foreign and Security Policy priorities, such as efficient multilateralism and global legal order. One of the main themes was a possible solution of Serbia-Kosovo relations via territory exchange. When it came to this issue, EU officials remained ambiguous, while some of the ministers expressed clearer opinions.

In the lead-up to the meeting, Commissioner Hahn assessed that publishing a new Western Balkans accession strategy in February this year brought a positive dynamic to the region. Some of the examples, according to him, include the resolution of Greece-Macedonia name dispute and Kosovo-Montenegro demarcation agreement.

“There is also a new dynamic when it comes to Kosovo-Serbia conflict resolution”, stated Hahn.

Earlier, he wrote on Twitter: “The leaders of Serbia and Kosovo should outline an agreement between the two countries. Some progress has been made, but it’s too early to speak about the details. It is clear that every solution must contribute to peace and stability in the region”.

EU High Commissioner Mogherini expressed hope that Belgrade-Pristina dialogue will be finalized by the end of current Commissions mandate (2019) and emphasised that EU will support any solution reached by the two sides in accordance with international law and EU law.

“I can report that I have seen a clear and strong support to the dialogue and commitment of presidents Aleksandar Vučić and Hashim Thaçi from the region’s ministers, with whom we discussed EU cooperation”, said Mogherini.

She pointed out that there is a possibility for finally solving one of Europe’s most complicated and most difficult conflicts full of consequences for the entire region.

Mogherini mentioned that forthcoming referendum in Macedonia and elections in Bosnia and Herzegovina were also on the agenda.

She expressed hope that the outcome of the elections will enable continuation of work on the reform agenda, and reminded that EU fully supports Macedonia-Greece name agreement.

Pacolli against border correction; Dačić not sure whether Kosovo favours an agreement

Kosovo’s Foreign Minister Behgjet Pacolli made his position against correction of Kosovo’s border clear in Vienna and said that solution is establishing a common economic zone. By stating this, he aligned himself with the agreement reached among his country’s ruling and opposition parties during yesterday’s unannounced meeting.

Pacolli said there should be no divisions on the basis of ethnicity, language, religion or anything similar and that people in the region need to live together and concentrate on the economic development.

“We have to make an effort and find instruments for the fastest possible improvement of citizen’s living standard”, explained Pacolli.

He added that better life, security and better education need to be worked on, while there is no space for working on the borders.

“Instead of separating ourselves and exchanging territories, let us agree to establish a free economic zone on them. This way, we would attract investments and improve citizen’s standard of living. People need to think about the economy and better life, because political tensions disappear when economy is in a better shape”, he said.

Pacolli also stated that he supports the dialogue and president Thaçi, emphasising that it will enable Kosovo to become a member of international organizations.

He criticized Serbia’s Foreign Minister Ivica Dačić and noted that he allegedly spends vast amounts of money for other countries to revoke their recognition of Kosovo.

“I can guarantee that no country has revoked its recognition. They have to inform us they no longer recognize us, and we have not been informed. Dačić is spreading fake news”, he said.

Arriving at the meeting, Dačić stated that Serbia is committed to finding a compromise solution between Belgrade and Pristina and added that it is still to early to speak about when it can be expected or if there will be any.

“I am not sure that other side wants that”, said Dačić, adding that an agreement would be in the best interest of Serbian and Albanian people.

Albania’s Minister for Foreign Affairs Ditmit Bushati stated that he hopes normalisation dialogue between Belgarade and Pristina will be concluded with an agreement on mutual recognition and a legally binding contract, which would ensure democratic stability in the region.

German Foreign Minister Heiko Maas was more careful. He said he was very skeptical when it comes to a land swap.

“We believe that it could open too many old wounds”, he said.

Foreign Minister of Finland Timo Soini regards the issue of a possible territory exchange as risky, if there is not enough preparation.

“It is a complicated issue, war history is difficult and we must be careful not to create new problems”, he said, adding that he is unable to formulate a strong opinion at the moment.

Çollaku: Serbia-Kosovo negotiations in the final phase, but time is running out

No comment from Brussels on suspension of ZSO deal