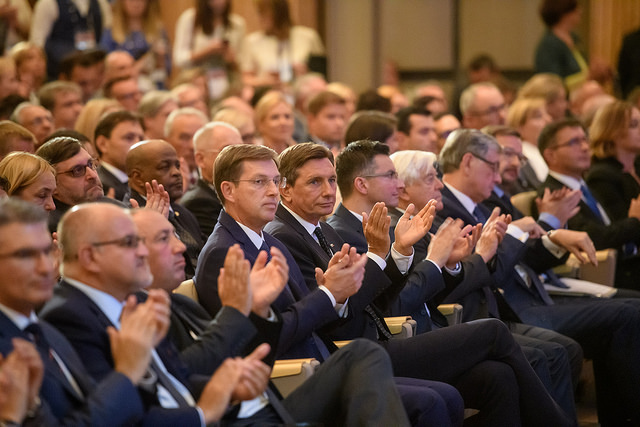 BLED – The Bled Strategic Forum (BSF), Slovenia’s biggest foreign policy event, kicked off at the lakeside resort of Bled on Monday. The opening ceremony was addressed by PM Miro Cerar, who looked for ways to bridge the divide, which is the slogan of this year’s event, and by FM Karl Erjavec, who took a look back at the history of the event. They were followed by President Borut Pahor, who emphasised the need for reform of Pro-European politics.

Cerar noted that the world had changed dramatically over the last few years, as the economic order and strategic alliances that had been known for decades were suddenly called into question, and multilateralism being severely challenged.

“I truly hope that our focus will be on how to make the European Union better, stronger and more united. Only in this way we as Europe can be a true player in the relentless global arena, bridging the divides of our time”, he added.

Erjavec announced that the BSF would take a closer look at some of the most pressing issues that divide the world, adding that trust, dialogue and compromise were the only way to bring people together.

The Western Balkans and its role and future in the EU have also been always high on the agenda, and the forum has also looked beyond the European borders, discussing the Mediterranean and Middle East, Erjavec added.

President Borut Pahor aired the view that Brexit demonstrated that the EU was at a standstill, as he offered his views on the state of the bloc in his address to the Bled Strategic Forum on Monday.

The current standstill experienced by the EU will turn into a crisis if nationalist politics begins to prevail, he assessed. “For now, this is not yet the case. However, it’s becoming stronger than ever. It’s undergoing a surge.

“Pro-European politics, fearing for its position, is adjusting to it. It’s not providing an alternative. In my opinion, this can no longer continue. Some sort of political risk must be taken. We must expose ourselves,” Pahor said.

He again criticised the European Commission for failing to take a firm stand on the observance of European and international law with regard to the border between Slovenia and Croatia.

“Why would the Balkan countries try to reach an agreement if, in the Commission’s opinion, such agreements do not need to be observed,” the president wondered.