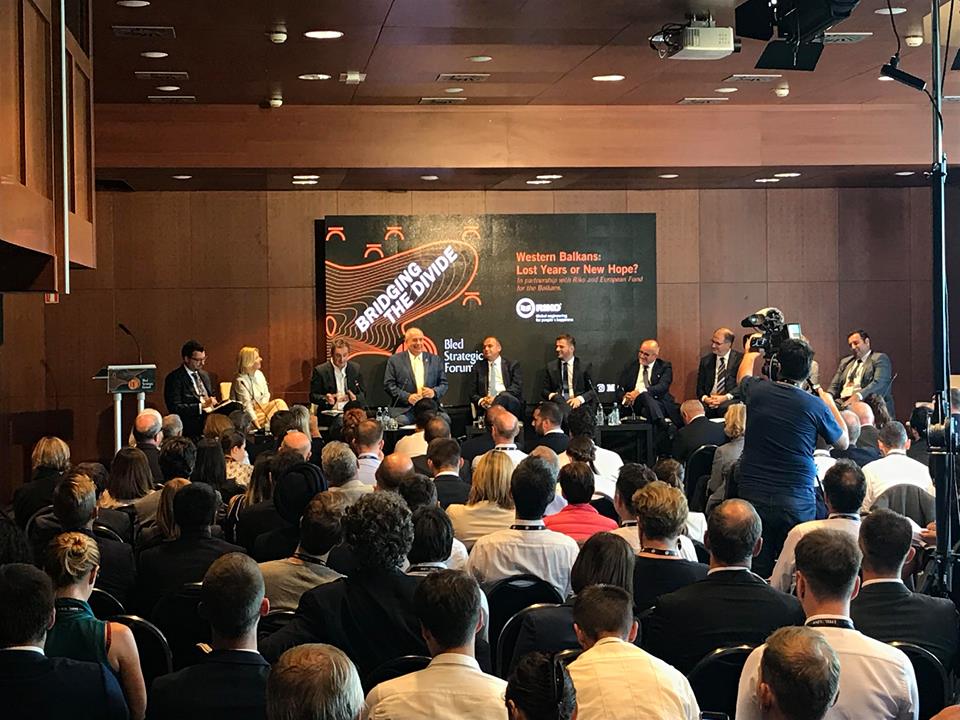 BLED – Referendum in Macedonia, Serbia-Kosovo normalisation process and the role EU plays in the region were the topics that dominated this year’s Bled Strategic Forum panel „Western Balkans: Lost Years or New Hope?”.

The panel, organized in partnership with Riko and European Fund for the Balkans, was moderated by Tim Judah, Balkans correspondent at The Economist.

Terens Spenser Nikolaos Quick, Deputy Minister for Foreign Affairs of Greece, opened the discussion with stressing the historical importance of the Prespan Agreement between his country and Macedonia.

“There are political costs, pains have been significant, but the future will reward those who press on”, said Quick, adding that there is a clear majority in Greek Parliament and that the Agreement will certainly be supported.

His Macedonian counterpart Andrej Zhernovski agreed with the assessment that this year is a historic one. He was, however, hesitant to guarantee the success of the ratification process, saying that it will not be easy to reach the census of 50% + 1 turnout in the forthcoming referendum.

Nevertheless, he emphasised the effort political actors in Macedonia put into the referendum campaign. “Coalitions are usually formed after the elections in Macedonia. Now they are formed beforehand”, he said.

Zhernovski informed the panel that the main opposition party, VMRO-DPMNE, the position of which has not yet been made clear, will probably not call its supporters to boycott the referendum, but also that it will not support it. If the referendum is successful, he continued, some members of the opposition will be necessary for providing a two-thirds majority in the parliament.

“It would have been easier to convince the citizens if the EU had opened the accession talks with Macedonia this year. But we are continuing with the screening process”, he concluded.

Another regional development that was in focus during the summer, Judah reminded, was the negotiations process between Kosovo and Serbia. Enver Hoxhaj, Deputy Prime Minister of Kosovo, expressed his disappointment with the recent actions of President Aleksandar Vučić, saying that the praise for Milošević in his Mitrovica speech this weekend was unjustifiable.

“We are committed to the dialogue, but Vučić is the last man in Serbia whom we trust. However, I am a historian by training, and I know that you make a peace deal with enemies, not with friends”, Hoxhaj stated.

Asked by Judah whether he would accept the deal that includes the exchange of territories (northern municipalities for Preševo valley), recognition from Serbia and UN membership, Hoxhaj decided not to comment. He stated that Kosovo would like to complete its statehood as a multi-ethnic country, within the current borders.

After discussing the most pressing topics, the panel turned to the general situation in the region and its progress towards the EU. The speakers were either carefully optimistic or mostly pessimistic.

Representatives of Albania and Montenegro pointed out their respective countries’ success in the integration process. Gent Cakaj,  Deputy Minister for Europe and Foreign Affairs of the Republic of Albania said that the objective (EU membership) is still distant, but not unreachable. He emphasised the efforts his country made in securing the independence of the judiciary.

“In the 1990s, EU was enlarging, while Balkans was at war. Now Balkans is willing to enter the EU, while it is having an enlargement fatigue. We need to find a way to cross their paths”, said Cakaj, adding that the past years were not lost, but that there is still not enough new hope, referring to the panel’s title.

Srđan Darmanović, Minster of Foreign Affairs of Montenegro, was more optimistic. He stated that his country is only two negotiation chapters away from opening them all, and that he believes it can become EU member even before 2025.

“It is in Montenegro’s strategic interest that all the countries in the region become NATO and EU members, because that way the whole Western Balkans will be more stable, prosperous and democratic,” Darmanović said.

On the other hand, there were members of the panel that did not see the current situation in a positive light. Hedvig Morvai, Executive Director of European Fund for the Balkans expressed her view that, because of the inability of the region to deliver on the reforms, and the complex situation within the EU, now is not the time for optimism.

Even though there seemed to be new developments at the end of last year and the beginning of this one, everything remained at the “business as usual” level, Morvai made her position clearer. “We need a new integration narrative for the Western Balkans”, Morvai said, reiterating the opinion of Srđan Majstorović, Chairman of the Governing Board of Serbia’s European Policy Center.

“I consider myself a failed change-maker because I cannot see the developments I fought for the past 10 years, and I do not see them coming in the next 10 years. The region has to look into its own possibilities in order to formulate a real development strategy that would not depend from Brussels”, Morvai concluded.

Momčilo Radulović,  President of the European Movement in Montenegro, also gave a negative view on the situation, finding that the EU should be able to integrate such a small country as Montenegro, which is in a better shape than even some EU members. Fear, lack of vision and lack of leadership are the main problems of the enlargement policy and EU policy in general, he concluded.

Bratislava: Cooperation between V4 and the WB – What role for think tanks?