The idea of having a permanent agreement with Serbia makes many Albanians feel romantic. Solving a problem which was present for many generations during the past 100 years causes many to say – let it happen. Despite the greater price of what we expected and wished for, for Serbia to recognize Kosovo once and for good and that it joins UN to finally become a normal state.

Can the border correction between Kosovo and Serbia get done by moving some border lines in some villages or municipalities?

“Why not?”, we often hear citizen saying. “Anyways, there has been some movement in the northern and eastern part of the Kosovo, after the Second World War”, say some others. “Why shouldn’t something be corrected now?”

We are also seeing some diplomats, politicians and western analysts speaking freely when it comes to this topic. “Why not use this occasion if Prishtina and Belgrade agree on it?”, they suggest.

Anyways, it is not that simple. If it was, then it would have happened a long time ago in the Balkans. It did not happen after the war and it is dangerous for it to happen now.

Serbian President, Aleksandar Vučić, many times has linked the matter of Kosovo with what he calls a solution to the problem of “the two biggest Balkan nations, Albanians and Serbs”. However, with this statement, it’s even harder to come up with a solution to this problem.

Even if Pristina and Belgrade agree to it, the problem of “the two biggest nations” in Balkans cannot be solved only by moving the border between Kosovo and Serbia. That is simply because Albanians do not live only in Kosovo, the same way that Serbs do not only live in Serbia.

If we are speaking so as Vučić says, to solve the problem of Albanians and Serbs as the two biggest Balkan nations by moving the Kosovo-Serbia border, what will then happen to those Serbs and Albanians living in other countries?

Knowing precisely that this is not the solution, redrawing borders on ethnic basis was not allowed.

Since talking about partition of Kosovo is working against the Rambouillet Agreement, the Kumanovo Agreement and the Ahtisaari Package, hitherto process of normalization of relations between Kosovo and Serbia as well as against the Dayton Accords.

To talk against all these it means to only talk about interests of just one party: only Serbia… and Russia.

The concept of homogeneous countries in Europe thus far was successfully brought to a halt. Why make it possible now? Because if there is a ethnicity based land swap between two countries why not implement it elsewhere also?

Let’s suppose for a moment that it might be possible that these politicians have spoken with representatives of Albanians, respectively Serbs, in these countries and that they promised that whatever happens between Kosovo and Serbia will not affect them. However, people who believe in these, be it regional or foreign, should know that Balkan states, albeit with fragile democracies, still have democracy. And that the same leaders will not stay in power forever. So, despite the guarantees of any current government from Kosovo, Albania and Serbia leaders of tomorrow may not care and won’t respect their predecessor’s guarantees.

If Albanians in Macedonia want partition tomorrow, or Serbs in the Bosnian Serb Republic want to break-up from Bosnia – calling on the same rights of Serbs in Kosovo and Albanians in the Preševo Valley – who can stop them?!

Guarantees made by leaders in Pristina, Tirana or Belgrade? Hardly! It is also hard to guarantee this by Brussels and Washington.

Even if they fail to break apart, they will still cause incidents and unrest, innocent people may lose their lives, families might suffer.

Hence, no! There cannot be a solution between Kosovo and Serbia, by claiming a solution of the problem of the biggest Balkan nations, Albanians and Serbs.

VMRO-DPMNE opposes the agreement, but does not call for boycott 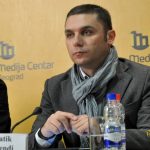 Adriatik Kelmendi is a Pristina-based journalist, columnist, writer, public speaker and the host of the show “Rubikon”, which is broadcasted in “Koha Vision” television channel. He is also a lecturer at the Faculty of Mass Communication in AAB College and a public advoce of the Initiative for RECOM.