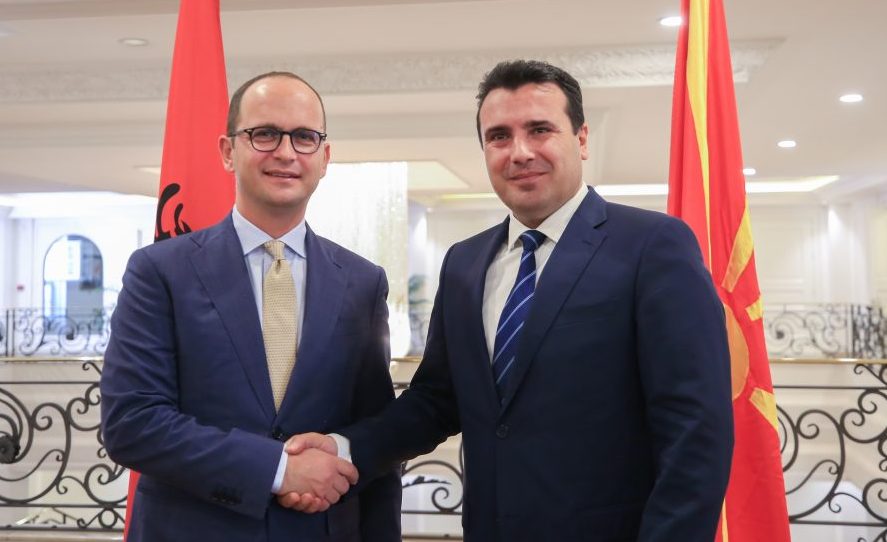 SKOPJE – Minister for Europe and Foreign Affairs Ditmir Bushati payed an official visit in Macedonia yesterday. He met with Prime Minister Zoran Zaev and discussed the latest developments in Macedonia and the region as well as the common challenges the Western Balkans are currently facing.

Minister Bushati praised the political leadership of Prime Minister Zaev who has taken a new approach towards the neighbours leading the country to full EU and NATO membership. As stated by Minister Bushati, the only key to opening this door is to support and vote in favor of the Prespa Agreement at the Referendum of 30 September. In this context, the head of Albanian diplomacy encouraged all citizens of Macedonia to exercise their democratic right to live up to their Euro-Atlantic aspirations.

Minister Bushati voiced that “it is a historic responsibility of each Albanian in Macedonia and the diaspora to vote massively and say “yes” to the Agreement at the Referendum. It is also a vital mission of the entire Albanian political spectrum to show unity and mobilize the massive Albanian vote on 30 September”.

Both dignitaries dwelt on the need for a quick entry into force the Law on Languages. On this topic, the parties shared the conviction that its proper implementation and the rapid establishment of monitoring mechanisms would provide Albanians with a better and fairer access to services as well as for their participation in good governance, development policies and in building an open, inclusive and Europe-oriented society.

The visit of Minister Bushati continued with meetings with senior officials and representatives of Albanian political spectrum.