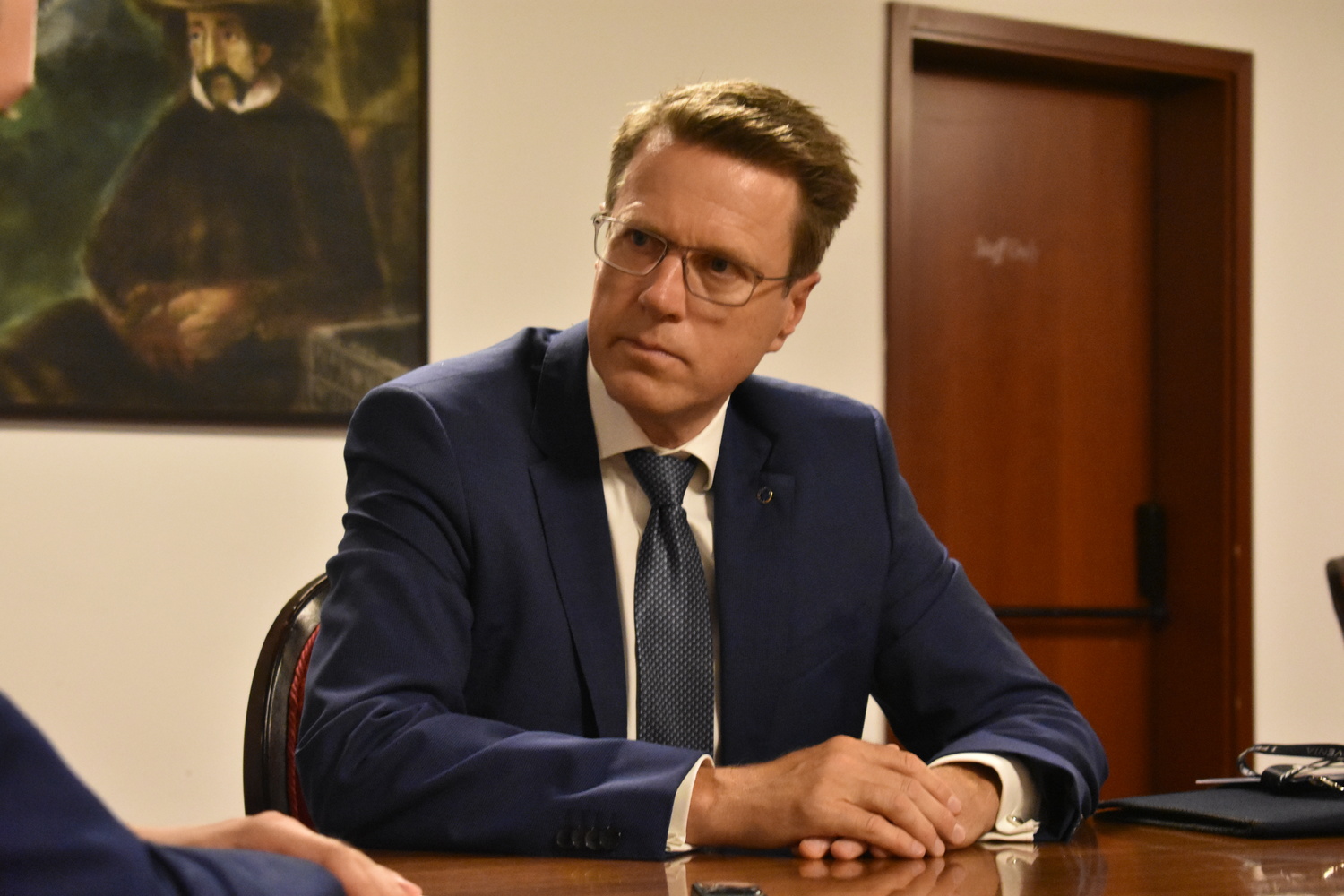 Interview with Samuel Žbogar, European Union’s ambassador in Skopje since 2016. The interview was taken during the Bled Strategic Forum 2018, which took place on 10-11 September in Bled, Slovenia, where Žbogar was one of the speakers.

European Western Balkans: My first question will be about the upcoming referendum in Macedonia. What are your expectations of the results since we have seen some polls that suggest the turnout will be less than 50%?

Samuel Žbogar: I think it is an important day for the country, because they are not only deciding on the Agreement with Greece, but also about what kind of future they want. The question itself is linked to EU an NATO membership, but even if it was not, it is very clear that the success of the referendum and, consequently, the change of the Constitution, is a precondition for the country to move forward in its EU integration.

The EU member states decided in June to open negotiations in a year, so we are working on that scenario – we have started the screening process so that everything is prepared next June when ministers  make another decision. A precondition for that is that the Agreement is implemented.

I understand it is a difficult decision. It is the issue of a country’s name. I understand people who are emotional about it and who, in a way, struggle with it. But I am also convinced that the reason will prevail over the emotions.

It is very clear, you know, that the future will be better with the country joining NATO and starting negotiations with the EU. The changes that people want to see in the country will happen through negotiations. They could happen even without them, but negotiations provide a great engine for change and reform.

People must know that we will respect their decision, because people must live with the consequences of their decisions, but we all hope, and our leaders were very clear, that the results will enable us to continue to work on opening negotiations next year.

SŽ: There is a lot of discussion because of this link in the referendum question, but I think it was proper for the Government, actually for the Parliament, to put it as it is. Because people should not be mislead that voting against the Agreement or boycotting it would not have consequences for the EU integration. This is so clearly linked, so I think it is good for the people that go to vote to realize it.

I do not want to talk about negative scenarios. This referendum is a consultative referendum. It is important that the Parliament changes the Constitution with the two-thirds majority, which is a complicated process.

So, I would not want to speak about what would happen if referendum fails, but it is very clear that we can talk about opening of negotiations next June only if the Agreement gets fully implemented before the end of the year or before Greece takes the ratification to its own Parliament.

EWB: The focus is now, of course, on the name change and the referendum, so the public outside Macedonia does not really know much about the new Government’s reform process. How do you rate it? We have seen several plans, and do you think they have been successful since this Government came to office?

SŽ: I think the assessment of the last year was good, and that is why in the spring, when we presented the report on Macedonia, the Commission recommended opening of negotiations. It also took note of the several steps taken by the Government. This was the reason behind the positive momentum at June’s Council of Ministers meeting.

However, ministers said the reforms need to continue and deepen. That is what we want and are expecting to see. The reforms are most concerning the judiciary, security services and public administration. These are three major areas where we want to see deepening of reforms.

But, primarily, people should see the reforms. The Government should not do this for the EU, it should do it so that the people can see the change of governing compared to the previous governments. If people notice the change, I am pretty sure we will also do it next June.

This is also the other precondition for opening of negotiations. So, there are two parallel processes – full implementation of the name Agreement and continuation of the reforms, which should produce results visible to people and to us.

EWB: Macedonia was the first Western Balkan country that became an EU candidate. The name issue with Greece was slowing it down. If it is resolved, do you believe Macedonia could catch up with the two front-runners, Serbia and Montenegro? Does it have a potential to perhaps join the Union by 2025?

I think we are seeing that in the region, crisis and instability in one country influences other countries. At the same time, the solution between Skopje and Athens and the optimism around it helps others as well. It is at least putting pressures on other countries to solve open problems. The same will be if they open negotiations next June – it will put the pressure on those who are negotiating already.

I think Macedonia will move fast if it avoids mistakes. They have been in this process for so long, so “machine” is there. They have also translated a lot of legislation, they are already doing a lot of things that were asked of others during negotiations. If you compare the spring reports of all six countries, you can see that they are quite advanced on several areas and very comparable to the two negotiating countries.

EWB: What do you see as the largest obstacles to Macedonia’s EU accession in the long term?

SŽ: Negotiations take time either way. No country is ready to enter the EU at the moment. It is good to have these years of preparations because the economy is weak and could suffer from the completely open market.

The other big danger, probably for all countries, is migration of their citizens to the EU. We can already now see the number of people who left the country. In the past years, the situation was as it was and they did not see the future in the country, so many left. When you travel across the country, every city, apart from Skopje, has lost population. They either move to Skopje, or, mostly, leave the country. I think this is one of the dangers, that many young people would look for the future outside.

But, of course, the process is meant to develop the country to the point that it is different when it enters the European union, so that people do not feel the urge to leave it.

EWB: Skopje will be the host of Western Balkan Media Days next week, and media freedom is definitely one of the topics that has attracted attention. There have been calls upon the EU to pay more attention to this issue. How do you see the state of media in Macedonia? Have there been any positive or negative changes?

SŽ: I think there have been positive changes. It is visible that the media feels more free to report and criticize the Government. Government is not advertising in the media any more, which was the way to gain influence over them. The media feel less pressure, they are more vocal than before.

That is a positive aspect. The negative one is the financial sustainability of the media. You can see that most of the written media have gone bankrupt, there is no written media with large circulation any longer. On the other hand, the electronic media are struggling with finances and are owned by people who have other businesses. There are many TV stations, and with such a small advertising market, it is difficult to sustain them.

We can see the connection between capital and media and the influence of capital has on media because of the dependence on the owners who also own something else.

EWB: The second most important topic in the Western Balkans is the normalisation between Serbia and Kosovo. There has been a lot of talk about the possibility of some kind of territorial exchange and that it could destabilize others, primarily Bosnia and Herzegovina and Macedonia. Do you believe Macedonia is vulnerable to this kind of external shock, or that it could cope with that kind of challenge much more successfully than people predict?

SŽ: In the past, they were quite vulnerable to the negative influences from outside. There were also 2001 conflict, Kumanovo incident in 2015 and similar events.

I think the situation between the two communities is much more different now. Albanian parties are working very well with the majority-parties, at least the governing one. For instance, the law on languages has passed the Parliament. So, I do not think that there is an ethnic tension inside the country that could be misused by someone.

Of course, provided that the referendum goes well, Macedonia will enter NATO pretty soon, and that gives additional guarantees of stability to the country. From that point of view, the NATO membership is important to them in the short run.

Hahn: Kosovo and Serbia should reach agreement by the middle of 2019