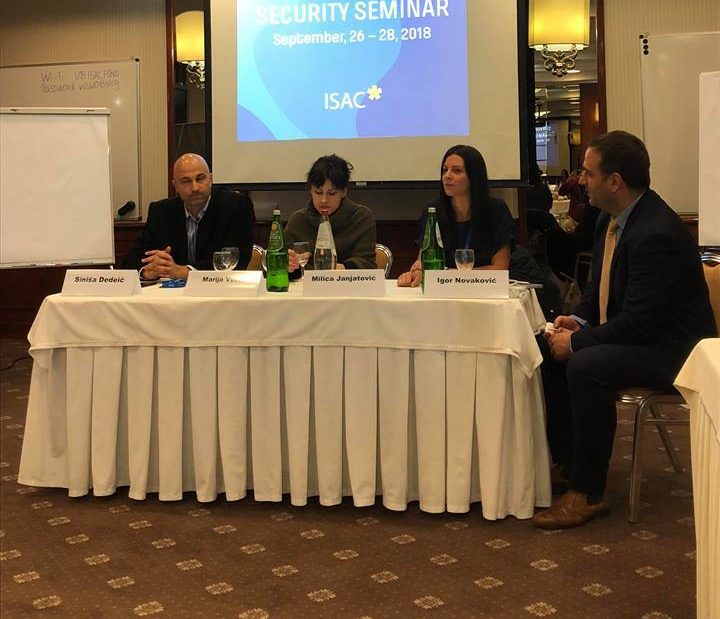 VRŠAC – Military neutrality and state of media in Serbia were the main topics discussed during the second day of the Fourth “Young Leaders Security Seminar” held in Vršac, organized by the ISAC Fund.

The first panel discussed the concept of neutrality and the ability of Serbia to achieve it. It was highlighted that, during the evolution of international law, certain rules have been developed in this area, such as not allowing troops of other country on one country’s own territory, not allowing communication across its own territory, as well as the obligation for a neutral state to defend its own territory in a case of war.

One of the conclusions was that a neutral country must control its entire territory to maintain its neutrality, because otherwise a possibility of a conflict over uncontrolled part of the territory would over exist.

Speaking about the military neutrality of the Republic of Serbia, panelists looked back at the supposed neutrality of Yugoslavia, but also discussed current Serbian declaration of the neutrality in the Nation Assembly’s Declaration on Kosovo. They pointed out that this neutrality is not conventional, because, according to its formulation, Serbia is neutral towards existing military alliances. This would mean that if, hypothetically, a new military alliance was founded, Serbia could join.

During the panel about fake news in Serbia, journalists pointed at current problems the country is facing, one of the basic being fact-checking. Journalists pointed out that since media are racing to publish news as soon as possible, they are not checking the truthfulness of that news.

Furthermore, they stated that the public in Serbia is facing blatant propaganda and open lies that are published on a daily basis. One of the suggested ways to change the situation for the better is a reform in a way Serbian courts process and punish these acts.

What would Macedonia’s NATO accession mean for the region?