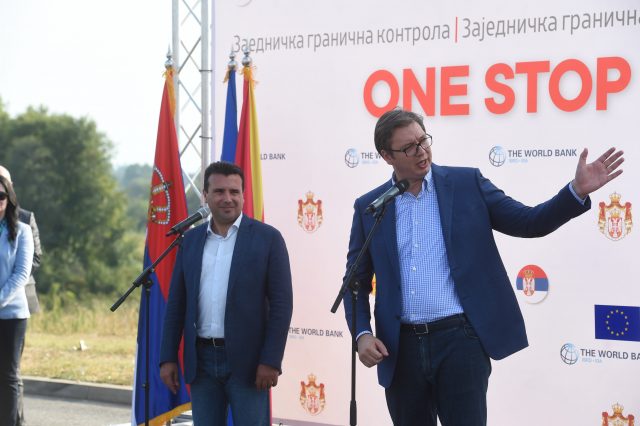 BELGRADE – President of Serbia Aleksandar Vučić maintained the reserved position towards the perhaps biggest diplomatic breakthrough in the Western Balkans in the past two decades – the Agreement between Macedonia and Greece.

Commenting on the results of the referendum in Macedonia, he assessed that Europe has to act more responsibly towards the region and added that some people from abroad “underestimate small Balkan people”, B92 reported.

“It is not my job to interfere in the internal issues of a sovereign country… I’m afraid and its seems to me that some people from abroad underestimate us, people from the Balkans, and think everything they want can be achieved. The think this way – we will see if people will support our soulution; if not, we will bypass them and try with the pressure on the MPs; if that is also not possible, it does not matter, it has to be that way”, said Vučić.

Vučić added that Serbia’s position is to respect every deal between Greece and Macedonia, but the “will of the people can not be overlooked and nothing should be imposed from outside”.

Vučić said that, in his view, it would be impossible to celebrate a success of a referendum if the turnout is lower than 50 percent, that is to render referendum unimportant “if you do not agree with the result”.

More than 91 percent of the voters in Sunday’s referendum supported the name change agreement with Greece. The turnout, however, was lower than expected at 37 percent, which makes the future of the agreement more uncertain ahead of the vote in the parliament.

Serbian media have mostly cheered the setback, with the headlines like “NATO crashes in Macedonia”, “Zaev won’t deal with defeat”, “American hypocrites: Macedonians, bravo for the referendum, doesn’t matter that it failed?!”, “A debacle in Macedonia officially announced” etc. dominating the tabloid newspaper.

What was Serbia’s position before the referendum?

Ahead of the referendum, all the countries of the region and neighbourhood congratulated and welcomed the Prespa agreement between Macedonia and Greece on name change apart from Serbia, official reactions of which have been lacking to this day.

Minister of Foreign Affairs of Serbia Ivica Dačić, before the referendum took place, had stated that Serbia did not congratulate Macedonia and Greece because “there is nothing to congratulate”.

That does not mean that Serbia is against any agreement, Dačić insisted. On the contrary, it has a positive opinion of and supports any agreement that pushes for a peaceful solution of problems.

It seems that the relations between Serbia and Macedonia have cooled down since Zaev and SDSM came to power, which can be noticed from the statements of high officials and lack of communications between the two neighbours.

Relations between Serbia and Macedonia have been marked by abrupt ups and downs in recent years. In that context, Minister of Foreign Affairs of Serbia threatened last year with the change in official position on the constitutional name of Macedonia, because of abstaining of the latter in the vote on Kosovo’s UNESCO membership. Two years before, a mutual session of the two governments took place, during which ambitious cooperation in the fields of economy and infrastructure was agreed upon.

Macedonian Prime Minister Zoran Zaev payed an official visit to Serbia on 20 and 21 November 2017, during which it was agreed that the third mutual session of the governments will be held in February or March 2018. The session, planned for this year in the city of Niš, did not take place due to “undelayable obligations” of Serbian Prime Minister Ane Brnabić.

Last year, a team of investigative journalists from several media outlets published the documents of Macedonian counter-intelligence claiming that the members of Security Information Agency (BIA) of Serbia supported the government of Nikola Gruevski and VRMO-DPMNE through propaganda and intelligence work during the political crisis before the transition of power. A selfie of BIA member and, at the time, advisor at the Serbian Embassy in Skopje Goran Živaljević, taken at the time of incursion of a masked group that physically assaulted members of the opposition parties in Macedonian parliament, was also acquired by the media.

After these events, Živaljević said that he had a permission to enter Macedonian parliament during the violent protests following the parliamentary elections, which was confirmed by Vučić at a press conference. His claim was, however, denied by the VMRO-DPMNE, which stated that “no institution issued this confirmation”. The two countries have not become enemies since the event, but their relations have undoubtedly cooled down.

President of the European Policy Centre Governing Board and member of the Balkan in Europe Policy Advisory Group Srđan Majstorović, before the referendum was held, assessed that Serbia “missed an opportunity” and did not recognize the importance of the historic moment the Agreement represents.

“I will remind that stabilisation and association process, as well as EU accession, includes the development of regional cooperation as one of the most important preconditions, and it is clear that no Western Balkan country can make a progress on the EU path on its own. A success of the neighbours should be regarded as a success of the whole region”, said Majstorović.

Commenting on the “silence” of Serbian government on the Agreement between the two countries, Majstorović said there were some “unwarranted comments”, but also that Serbia, as one of two countries that made the most progress in the EU integration process, is responsible foe sharing that experience with its neighbours.

He added that the fact that the majority of civil society sector in Serbia welcomed and congratulated reaching of the Agreement “can only mean that it (the civil society) is better equipped and understands the importance of regional cooperation better than the officials”.

Director of the Centre for Regionalism from Novi Sad Aleksandar Popov stated that Serbia acted contrary to the “common sense” in the wake of Macedonian referendum.

“Everything has been turned upside-down, because regional stability should be in Serbia’s interest, and it is clear that reaching the Agreement between Greece and Macedonia represents an important step in that direction. We should remember that Macedonia was on the verge of a civil war only year and a half before these events. Serbia’s actions are contrary to the common sense, because Serbia should be cheering the normalisation of relations in the region”, said Popov for Beta news agency.