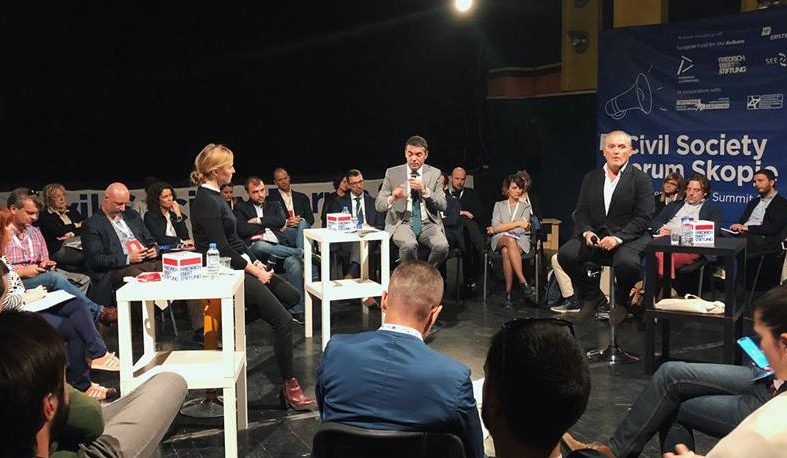 SKOPJE – Solving bilateral issues in the Western Balkans is complicated, but that is not an excuse for falling back on solutions such as exchange of territories – this was the main conclusion of today’s panel “The Bilateral in the Balkans: Regional implications of Bilateral Disputes”, held in the context of Civil Society Forum in Skopje. Speakers at the panel were Nikola Dimitrov, Minister of Foreign Affairs of Macedonia, and Veton Surroi, founder of Kosovo’s daily Koha Ditore.

Minister Dimitrov pointed out that his government, in the past year and a half, has worked hard to solve Macedonia’s most pressing bilateral disputes, with Bulgaria and Greece. The process with Bulgaria was successful, resulting in rise in tourism and trade, with the interest for investments doubling during the past year, he emphasised.

Solving the name dispute with Greece has proven itself to be more complicated, especially after the referendum on 30 September.

The Agreement will now go to the parliament, Dimitrov reminded, with early elections remaining the last resort for the implementation of its provisions.

“Leadership is about reality. There is no going around the Agreement if Macedonia wants to become an EU and NATO member”, stressed Dimitrov, reminding that more than 600.000 people supported the change of the country’s name.

“You can govern with that number of votes in Macedonia”, he stated. “In democracies, people speak by voting, and 94% of them voted in favour of the Agreement”, he added.

When it comes to the other significant regional dispute, between Serbia and Kosovo, this year was undoubtedly marked by the initiative of Presidents Vučić and Thaçi for a “correction of borders”, most probably along ethnic lines.

“The moment people start talking about borders, it is a sign that things went tremendously wrong”, stated Surroi, adding that “a notion that identities can be protected by the borders is based on wrong premises, and the results would be equally wrong”.

He found regrettable that the relationship has moved from Serbia-Kosovo to Serbs-Albanians.

Dimitrov agreed, emphasising that the Stabilisation and Association Process was intended to make borders less important, and bringing them into the spotlight once more is a step in a wrong direction.

He assessed the debates on which nation is older and who suffered more as unhealthy, stating that issues such as education and digital economy should be discussed instead.

“There are two types of politicians: Those who gain political capital from regional disputes, and those who invest their political capital in solving them, knowing that they will not be able to renew it that way”, Dimitrov underlined.

The right solution for Serbia-Kosovo dispute, Surroi said, is returning to the old paradigm: inter-state relations. The question should be how to go from partitioning to sharing, for example how to manage lake Gazivode together.

Asked if the countries and the societies have the capacity to reach that kind of solution, he pointed out that citizens of both Kosovo and Serbia know what they are against, but not what they are in favour of. According to him, that leaves a space for a new solution.

Answering the question on EU integration, Dimitrov stressed that, since the enlargement enthusiasm is spent, the countries of the region need to outperform themselves if they want to attract EU’s attention. They need to show solidarity, a primary European value, and that is what Macedonia, Greece and Bulgaria have recently done.

Both panelists agreed that civil society can and should play an important role in solving bilateral disputes. Surroi gave the example of changing the mentality of people born and formed during the 1990s wars, while Dimitrov highlighted the importance of dealing with everyday needs of people living close to the borders.

[EWB Interview] Grlić Radman: We have succeeded in bringing enlargement high on the EU agenda