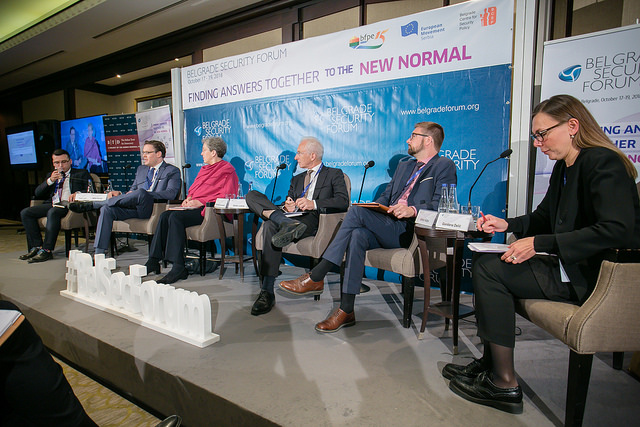 BELGRADE – Dealing with rising Russian assertiveness in recent years, especially when it comes to Western Balkans, was the main topic discussed at the fourth session of Belgrade Security Forum 2018. Moderated by Gordana Delić, Director of the Balkan Trust for Democracy, the session, titled “Beyond Ideology: West-Russia relations and political pragmatism” was an intersection of Forum’s regional and global topics.

Russia is, generally speaking, weaker than the Western countries. However, NATO and EU members are disunited on many fronts, and Moscow is successful at exploiting those cleavages, emphasised Ulrich Kühn, a nonresident scholar at the Carnegie Endowment for International Peace.

In his opinion, EU should find a way to overcome its internal problems in order to protect its fundamental interest: peaceful Europe with strong territorial integrity of all countries. Russia violated this principle when it occupied Crimea, said Kühn.

The West needs to find a modus operandi in its relationship with Russia, and it should not be enmity, he concluded. One step in that direction is preventing a possible alliance between Russia and China.

Stefan Lehne, Visiting Scholar at Carnegie Europe and lecturer at the Diplomatic Academy in Vienna, focused on Russia’s activity in the Western Balkans. According to him, the notion that the region will be a future geopolitical battleground between West and Russia is unfounded.

Western Balkans is much more firmly in the Western sphere of influence, assessed Lehne, although he called EU a “reluctant magnet”. Nevertheless, the only significant aspect through which region is connected to Russia is energy.

“In terms of strategic options, Russia has little to offer to the region. Frustration attempts on EU regional policies will continue, though”, stated Lehne, explaining that Moscow’s strategy is to use minimum of means to cause maximal possible frustration.

“I am more afraid of EU’s inaction that Russia’s action”, he concluded.

Also taking part at the panel was Clarissa Duvigneau, Senior Policy Adviser to the Strategic Analysis Capability Section at NATO in Brussels. Asked whether EU enlargement was replaced by NATO enlargement in the region, she emphasised the difference between the two processes, the former one having to last longer due to more profound changes in the country.

Duvigneau stressed that, even if some countries in the region, such as Serbia, do not want to join NATO, cooperation with the Alliance does bring multiple benefits. Russia and NATO have also developed a relatively comprehensive cooperation, although it suffered in recent years, she reminded.

The countries need to have the right to freely chose international organizations they will be part of, without an outside influence, Duvigenau was categorical.

Reflecting on her statement in his second turn, Kühn reminded that Russia sees itself as a Great Power, with a sphere of influence every Great Power needs to have. These two tendencies, countries choosing freely and some countries having a sphere of influence, need to be reconciled. His suggestion was to declare an end of further NATO enlargement after Macedonia becomes the 30th member.

Luzin stressed that it would be of greatest importance to EU and the West that Russia goes through a full modernisation process, becoming more alike to developed European countries. It is an extremely difficult thing to achieve, he reminded, because of the entrenched interests of the state structures, which control 70% of the GDP.

On the other hand, Nováky highlighted the conditions required to resist Russian pressure and maintain relative neutrality. Drawing from the example of his home country, Finland, he listed open communication channels with his Moscow, as well as internal stability, as two main requirements.