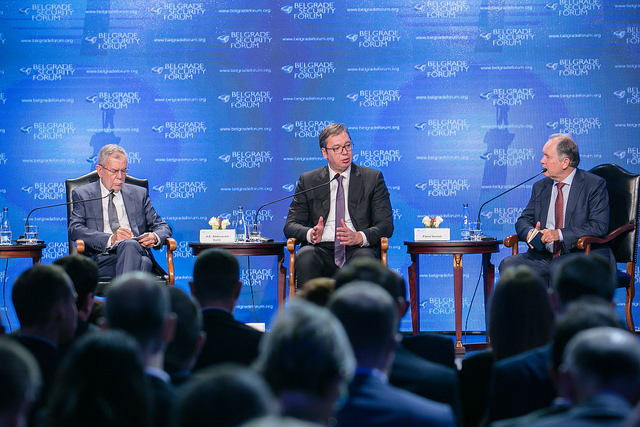 BELGRADE – The second day of the Belgrade Security Forum kicked off with the official opening of the event by Sonja Licht, President of the Belgrade Fund for Political Excellence, one of the organisers. It was followed by the discussion on EU-Western Balkans relations, with participation of Presidents of Austria and Serbia, Alexander Van der Bellen and Aleksandar Vučić.

“Balkan has a potential that should be used”, stated Licht. “Do not say we are lacking potential, because we don’t, we just have not find a way to use and activate it yet”, she said, adding that some old paradigms should be abandoned and the dialogue should be developed, in order to show the world that the region is a credible partner.

Talking about this year’s topic of the Belgrade Security Forum, “Finding an answer to the new normality together”, Licht said that the answer lies in more humanity, justice and responsibility.

“We are looking for an answer to new normality. We don’t like that so many people are living in poverty, that they are insecure and do not know what their children’s future will look like, while new conflicts break out daily”, she said.

In his opening speech, President of Serbia Aleksandar Vučić stated that Western Balkans need stronger role of the EU and that something realistic and tangible has to be offered to the citizens.

“Serbia will do everything in its power to maintain peace and stability in the region, to develop good relations with everybody in the region. Serbia will remain firmly on its EU path”, said Vučić.

He reflected on the situation in the region after the unsuccessful referendum in Macedonia elections in Bosnia and Herzegovina.

“I daresay that we need a stronger role of EU. Otherwise, EU will cease to be the dream of democracy and freedom we have been striving towards”, he said.

According to him, what was offered to Macedonia was not as attractive to the average citizens as it was thought in the EU.

Citizens in the Balkans need something tangible, something they will see with their own eyes and feel in their pockets, emphasised Vučić.

Alexander Van der Bellen, introduced by the moderator Pavol Demeš as not only the President of Austria, but also of EU, since his country is currently holding the rotating presidency, stated that, after years of enlargement fatigue, he is now an optimist, because he can see the enthusiasm, but also that politicians in the Western Balkans look ahead boldly and understand that without a vision and dialogue there is no future.

In the Western Balkans, according to him, it requires courage to suggest peace and dialogue instead of a frozen conflict, and President Vučić has shown that courage, which was evident at the European Forum in Alpbach as well.

“It is not only the task of politicians and presidents to be brave. Citizens also need to support the vision of a dialogue”, he underlined.

Van der Bellen stressed that he does not want to lecture anybody in the WB, because he is aware of the problems that exist in the EU.

“Western Balkan countries have experienced great economic and political changes. Many challenges and problems, wars, economic crises, significant demographic changes. All the countries in the region, as well as Serbia, took up reforms, some of which are extremely hard to implement, and EU accession perspective has become more real”, he stated.

Van der Bellen pointed out that, since Austria is presiding over the EU, and one of its priorities is the Western Balkans, he wanted to highlight those relations with his visit to the region.

President of Austria emphasised that it is wrong to support nationalistic tendencies and that all EU member states and candidate countries have to contribute to Union’s strength.

“Economic power, competitiveness, international influence on the world stage are possible only if we work together, even though EU itself still does not have that kind of a global weight. Union as it is is much bigger than any single country. No country can be successful without good neighbourly relations”, he said.

“Why be a nationalistic dwarf, when you can be a welfare and peace giant”, Van der Bellen asked.

Answering the question of EU’s role in justice reform in Serbia, Vučić stated that those reforms are doubtless necessary and that situation has to be significantly improved, but that he does not see some countries in Europe doing much more better than Serbia.

“When it comes to necessary reforms in Serbia and other countries in the region and neighbourhood, people are right to criticize. That is why we are working with EU, OSCE, we are sending our constitutional amendments to the Venice Commission. It is the matter of weeks when they will find themselves in front of the parliament. There is much more to be done, and I admit that there is room for improvement, but does that mean that Europe is doing much better? I wouldn’t bet on it”, said Vučić.

As for US influence in the region, Vučić emphasised that new administration has been willing to discuss differing views on Kosovo, which itself is positive. “We have had an opportunity to talk openly and honestly”, he said.

He also pointed out that support for EU is falling in Serbia. At the beginning of the century, according to him, it was 80%, and now it is 42-43%. “You do not need to worry about the referendum, we will achieve the 55% of support”, he said. However, he stressed that nowadays support for EU, including his own, is mostly a rational one.

Asked whether he wants to go in history as a man who resolved Serbia-Kosovo relations, Vučić answered that it is not a question of history, but of the future.

“We have fulfilled every obligation from Brussels agreements, while Pristina did not fulfill the only one it had – establishing the Community of Serbian Municipalities”, said Vučić. “This is why I have tried to find a compromise solution, which means that both countries would have to loose something”.

He added that, in contrast to Kosovo politicians which constantly raise their citizens’ expectations, he is doing the opposite in his country. He will nevertheless remain ready for reaching a solution, whether it comes in a year, five or fifteen years.

President Van der Bellen underlined that the resolution of some disputes requires time, citing the example of South Tirol, status of which was successfully resolved only after seven decades.

“If one considers that wars ended not 25 years ago, which from a historical perspective is an extremely short amount of time, situation in the Balkans is not bad. That does not mean the is no room for improvement”, Austrian President concluded.

[BSF] [EWB Interview] Blockmans: 2025 is not a realistic date for enlargement

Pisonero: There should be freedom of expression on language and nation on the census in Montenegro