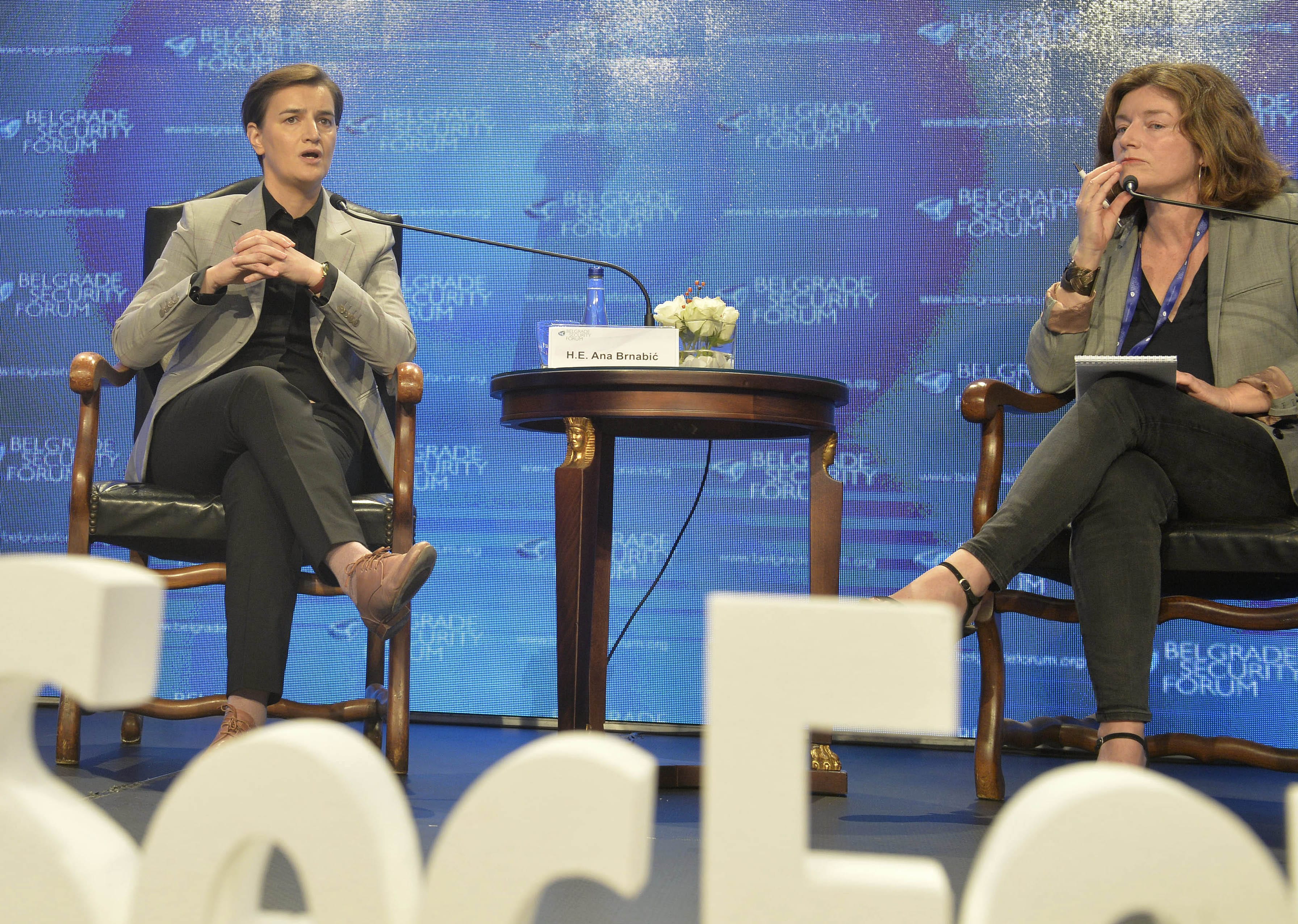 BELGRADE – One of the things that can be initiated within Berlin Process is establishment of a Western Balkans Research Foundation, which would contribute to the prevention of brain-drain and motivate most talented individuals to stay in their home countries, Serbian Prime Minister Ana Brnabić stated today.

“I have sent letters to the colleagues in the region, inviting them to sit down and start discussing the Foundation”, said Brnabić during a discussion with The Guardian columnist Natalie Nougayrède at the Belgrade Security Forum.

She added that unemployment is a problem, especially among young people (somewhat higher than 30%) and pointed out that this issue cannot be solved over night. However, the country has begun with reform and digitalisation of the education and it attempts to invest more in scientific development and innovations, she reminded.

Prime Minister acknowledged that a lot should be changed in the area of judiciary and illustrated that with the statement: “If you ask the citizens if they are satisfied, they will answer negatively. The same goes for entrepreneurs, the biggest investors coming to Serbia want to be secure and to solve potential disputes in front of international arbitration rather than Serbian courts.

She said that the judiciary needs to be more efficient and responsible, and that only a simplified explanation of its flaws relies solely on political influence.

After the moderator remarked that the European Commission’s Report on Serbia mentions “no progress in the area of freedom of expression”, Brnabić agreed that freedom of the press is a fundamental principle in every democratic society and that Serbia has much more to do in that area, but also that the problem was inherited from previous Government.

“Many politicians in Serbia have tried to use media as an instrument for personal benefit for decades, and I am proud that this Government, or at least myself, give a positive example of an open relationship with the press, we invite all of them on media conferences, I answer all the questions”, said Prime Minister.

She added that drafting the Media Strategy was unsuccessful, after which she had a meeting with the representatives of every media association, who demanded that the process begins from scratch and that a coordinating body which would work with their team is formed, to which she agreed, because that is in her cabinet’s competence.

Brnabić disagreed with the newest analysis of Freedom House, quoted by the moderator, which assessed that “during the last few years, governing Serbian Progressive Party has lowered political rights and freedoms, putting pressure on independent media, opposition and civil society organisations”. “It doesn’t strike me as objective”, said Brnabić.

She added that she agrees with the assessment that President Aleksandar Vučić consolidated his power, stressing that it is a result of reforms that were implemented, mostly in the economy.

“Let us be more balanced and objective, give credit where credit is due and not only criticize for the sake of it”, said Brnabić.

“Pandora’s box was opened 10 years ago”

Brnabić said that, when it comes to Kosovo and Metohija, status quo or a frozen conflict is not in Serbia’s interest, because it will always hold the country back. She does not exclude any idea in search for an acceptable solution, including the change of borders.

“I am convinced that a frozen conflict is not in Serbia’s interest. There are many reasons for it – first and foremost, it is a conflict, frozen or not, and as a country that in the 21st century wants and needs to have more employment, better standard, transparent administration, better rule of law – you cannot have a conflict, because people will not come and invest”, said the Prime Minister.

“I am skeptical when people say: “We cannot discuss borders, because it will open Pandora’s box”, because it was opened 10 years ago”, she said.

Asked to comment on the statement of State Department’s official Matthew Palmer, according to whom there is no specific agreement on the table at the moment, and whether it can be expected soon, she stated that she does not know, for there are many factors involved.

“Belgrade has honest intentions to find a compromise, and I hope Pristina does too. Looking back at what has happened in the last 10 months, all the incidents, I am not convinced that they are looking for a long-term normalisation of relations. However, we are always ready to negotiate.”