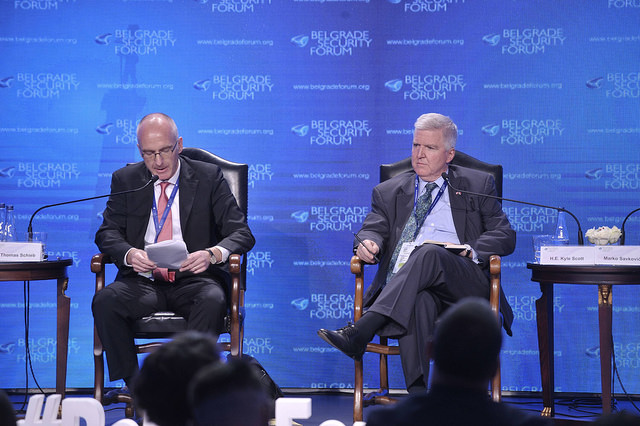 BELGRADE – Germany and USA are continuing their cooperation in the Western Balkans and remain strong proponents of the EU and NATO accession – these are the main messages of the Belgrade Security Forum panel titled “Balkans 360: Reassessing German and the US Engagement in the Western Balkans”. It was organized in partnership with German Marshall Fund of the United States, the George C. Marshall European Center for Security Studies and the Balkan Trust for Democracy.

The panel, moderated by Programme Director of the Belgrade Fund for Political Excellence Marko Savković, was dedicated to exploring current relations and efforts of the two powers in the region, as well as their attitudes towards local and regional issues, such as media freedom, rule of law and Belgrade-Pristina dialogue.

Ambassador of the United States to the Republic of Serbia H.E. Kyle Scott highlighted that his country has been a consistent champion for the Euro-Atlantic integration in the region, because it is a precondition for increasing resilience and stopping foreign negative influence.

“Strategic goal of all the governments in the region is EU integration, but we have seen halting of the progress for some time. In the end, I remain optimistic. Whatever support we give to the reform process, they cannot be imposed from the outside, but must be adopted by the leadership of the whole region”, Scott emphasised.

He said that he understands the “frustration” in Serbia, stemming from the long, demanding process of EU accession, but highlighted that the bureaucracy and slow pace are something the newer member states also complain about, but that they have gained much and “changed their societies for the better” during the process.

H.E. Thomas Schieb, Ambassador of the Federal Republic of Germany to the Republic of Serbia, stated that Western Balkans remains a priority for Germany, that it is up to political leaders to take courageous decisions, but that, at the same time, public should follow.

“Our government officials are traveling to the region. We are providing financial support… Accession is not vague and is of strategic importance to the Union, but we can agree that the EU reform is necessary – it must become more proactive. We think that prospering, stable, peaceful Western Balkans is in the best interest of Europe”, Schieb said.

He has also stated that Germany does not think that the “land swap”, discussed by the political elites in Belgrade and Pristina, is a good idea, as well as any re-drawing of borders along ethnic lines.

Dean at the College of International and Security Studies at the George C. Marshall European Center for Security Studies Andrew Michta explained that the titular Balkans 360 project is geared towards the broadening of their alumni network and promotion of cooperative engagement, which he sees as a “real potential”.

He also stated that “a sense of a growing economy and opportunity in the region can attenuate growing ethnic competitions”.

Speaking on German-American relations, Michta said that they remain at the core of transatlantic security and that, without Germany and United States, there are no long-term security in Europe.

He has also announced his Institute dealing in international security and defense studies has recognized importance of the Western Balkans, and that they will gather their alumni and experts on a conference dedicated to the region somewhere in the region, in March next year.

[BSF] [EWB Interview] Cooper: Belgrade-Pristina dialogue was a success rather than failure

Will Serbia’s position on Russia affect the relations between the ruling party and the EPP?