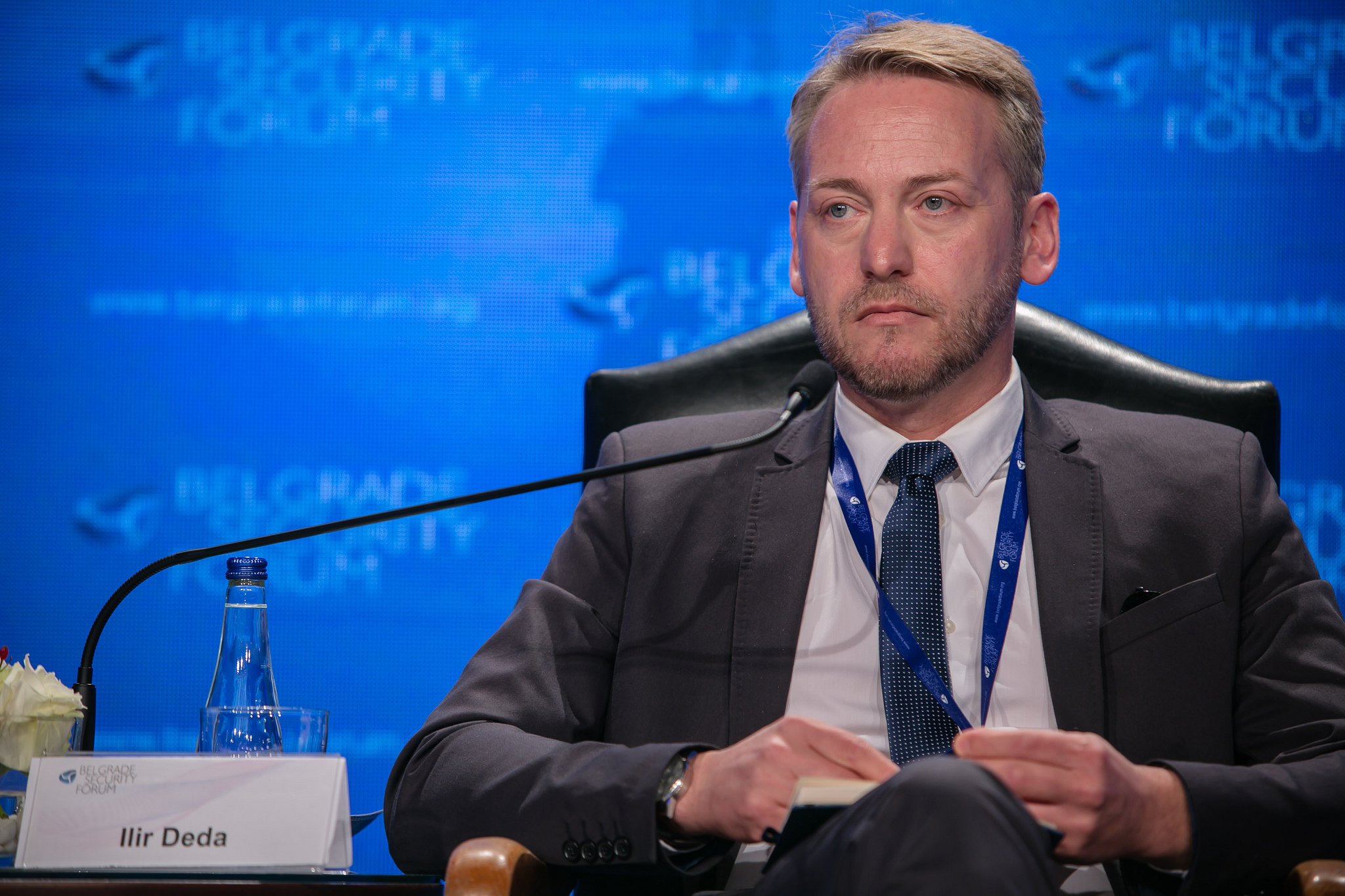 Interview with Ilir Deda, Member of Parliament of Kosovo from the “Alternativa” party and Public Policy lecturer at the University of Business and Technology in Pristina. The interview was done during the Belgrade Security Forum 2018, where Deda was one of the speakers.

European Western Balkans: How do you see the proposed idea of territorial changes as a part of normalisation agreement between Serbia and Kosovo?

Ilir Deda: I am very happy to say that this proposal has been completely rejected in Kosovo by all ethnic groups – 80% of Kosovo citizens are against it. That includes the majority of Kosovo Albanians, majority of Kosovo Serbs, majority of other minorities and all political parties in the parliament, whether they are in government or opposition.

The only person who has not understood that this cannot be implemented in Kosovo is, unfortunately, our President. I hope that he will understand it soon. This adventure, which would bring much damage to the entire region, cannot be the basis for any kind of sustainable solution, not only for Kosovo-Serbia relations, but for the dynamic of the entire Western Balkans.

EWB: Do you think it is possible for this idea to get enough support in Kosovo for it to be implemented?

ID: No. Our President Thaçi underestimated the people of Kosovo. He thought he was going to provide a lucrative solution, which in essence is a fascist solution – drawing borders between people based on their ethnicity, which would immediately invoke the need for resettlement on the “right side of the border”.

Our people have rejected that. We cannot find a lasting solution between Kosovo and Serbia based on models that lead to violent break-up of socialist Yugoslavia. Let’s not forget that Yugoslavia collapsed because of the quest for ethnic borders.

EWB: What do you think would be the best alternative for achieving the normalisation of relations?

ID: One would say that if two countries are determined to join the EU, to embrace and act upon European values, they need to look at other models of normal relationships between countries in Western Europe, rather than what we have been discussing in the past months. A Franco-German model can work best, and that could be it.

We must put our relationship in a perspective of long-term peace, predictable political, economic, social, cultural and security relations. We must not view each other as a security threat. If we plan our future in European Union, which highly values good neighbourly relations, than we must give an answer to what these good neigbourly relations are.

“Recognition is one of the preconditions for normal relations, but not the only one, which we can see from the example of Serbia and Croatia”

Your leaders say they will never recognize Kosovo, but recognition is one of the preconditions for normal relations. It is not the only one, which we can see from the example of Serbia and Croatia – the two countries recognize each other, but their relations are far from normal. There must be deep comprehension of what normal relations are.

EWB: So, do you think that the normalisation agreement entails formal recognition of Kosovo by Serbia? Could there be some alternative mechanisms?

ID: If we want long lasting peace, that is one of steps that have to be taken. But it depends on how we build our perspective on where we want to be. Can we imagine, for example, two armies performing joint missions together under Partnership for Peace or UN, peacekeeping somewhere together? Why is that so offensive to somebody? Can one imagine a joint initiative of Kosovo and Serbia as two members of the UN, pushing an issue together? What’s the future we are aspiring to? I do not think we can be spiteful when we project the future.

I also believe that we cannot forget the lives of people. How do we ensure that Kosovo Serbs feel in their everyday life that they are equal? How do Albanians in Presevo Valley feel equal? How do we match legislation with reality?

Also, I have been a firm believer that the first issue that should have been solved is the case of missing people. It would bring societies forward. Not only would it close the wounds of the war, but it would bring them forward to the next step. In the seven and a half year long process we have not solved the issue of the missing people, and there are almost 1,600 Albanian and Serb families who don’t know where their closest members are.

So, if we put things in the perspective of peace, then we go and solve issues that keep the wounds open. And inat (spite) is not a wound.

EWB: Do you think that the questions such as reconciliation and normalisation of relations between two societies have been sidetracked?

ID: That is because leaders are not honest. They go to Brussels, make very “European” statements there, and then as soon as they come back they resort to nationalism. That is not the way how we can lead the societies towards normalisation.

“Peace is not linked to anybody’s political future. The one who brings peace will be valued in history, regardless if he wins or loses the next elections”

I think Mr. Thaçi and Mr. Vučić have understood this process and have linked it to their political future. But peace is not linked to anybody’s political future. The one who brings peace will be valued in history, regardless if he wins or loses the next elections.

EWB: I must point at one paradox – on the one hand, many people in Kosovo and Serbia, civil society organisations and large parts of international community are against partition or territorial changes, because of the principle of ethnic versus civic nationhood. But, at the same time, they are on the same line with the Serbs that are against recognizing Kosovo at all, because it would be a territorial change. So, these two positions are irreconcilable. How do we make our way around this paradox?

ID: That is why we need guiding principles for this process from the EU and the US. We need to know what are non-negotiable principles and guiding principles that will show us where we need to go. And this is where Brussels has made a great disservice to Kosovo and Serbia by trying to learn how the manage a peace process, a process that was never managed by the EU because it is itself a peace project.

EWB: There is an impression that Kosovo is under much pressure right now, that it is stuck in its EU accession process. Is it in a position in which it has to accept anything that would move it forward?

ID: No, I think we must remember that the final deal must be implementable and it must increase stability both in Serbia and Kosovo and in the region.

I am a politician in Kosovo, and I do not feel any sort of pressure to do anything as soon as possible form any western government. I understand that there is a gloomy picture about where EU will be in 2019 because of the elections for European Parliament. But again, that gloomy picture raises more questions than it answers them.

“All three parties, Kosovo, Serbia and EU, must get more serious and more responsible about this process”

For example, who would take over the oversight of the implementation of the agreement if one is reached now? Who will guarantee the implementation of the agreement? There is no answer. I think all three parties, Kosovo, Serbia and EU, must get more serious and more responsible about this process, than they have been in the past seven and a half years.

EWB: Frequenty one can hear concerns, especially here in Belgrade, that Kosovo might pursue unification with Albania. Do you think there is enough support in Kosovo for this kind of unification? Are there scenarios in which this would be a possibility?

ID: Kosovo’s constitution is clear, it cannot join any country, it cannot join any territory and no territory and no country can join Kosovo. Our borders are sealed by the constitution, and that cannot be changed by any referendum. Our legal system is designed as such that for any kind of changes of the borders, a double majority in the parliament is also needed, which is impossible: two thirds of majority and minority representatives would have to vote for constitutional changes. This cannot be achieved in Kosovo.

“Kosovo’s legal system is designed as such that for any kind of changes of the borders, a double majority in the parliament is also needed, which is impossible”

I think this has to do more with propaganda about the aims of Kosovo, rather than with what these aims really are. You know, the aim of Kosovo is to be a member of international community, and this is not in spite of Serbia. We believe we are entitled to a membership of international community, whereby we could increase applicable standards for our own citizens because we will be bound by the membership. In Serbia this is presented as a kind of spite, which is not true.

EWB: Couldn’t Albanian population be frustrated that this kind of a union couldn’t happen because of the minority vote? Could that be a problem in the long run?

ID: No. Currently, the citizens of Kosovo, regardless of ethnicity, are only focused on one thing – will EU uphold its promises and lift visas for Kosovo citizens. This is a priority for all ethnic groups. And then we want to see how we can advance in the integration process. People want to see successful Kosovo. That is what our society wants – a successful country.

[BSF] [EWB Interview] Cooper: Belgrade-Pristina dialogue was a success rather than failure