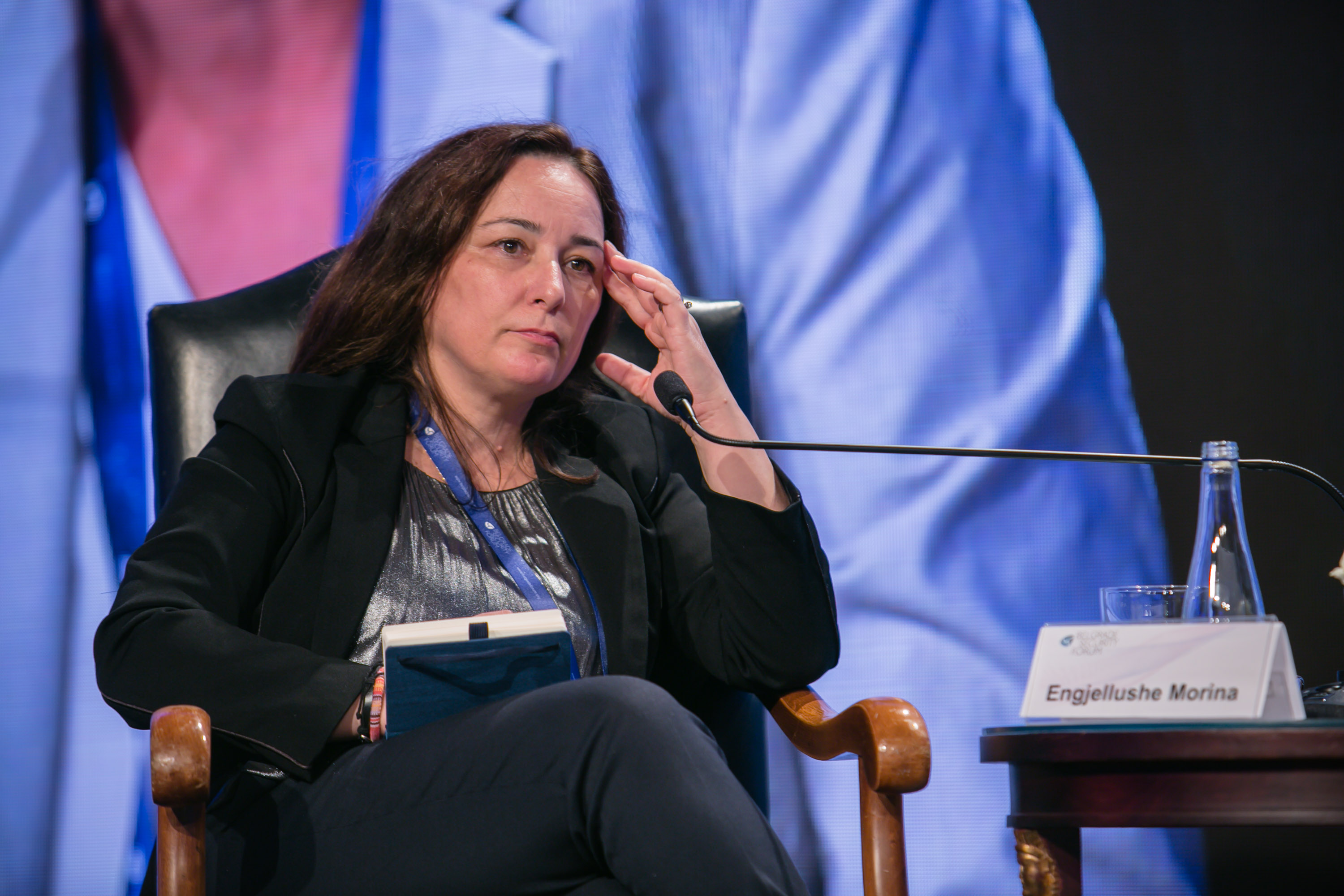 Interview with Engjellushe Morina, Project Manager at the Berghof Foundation, where she is a part of Conflict Transformation Research Program focusing on the Prevention of Violent Extremism (PVE) in the Western Balkans. The interview was conducted at the Belgrade Security Forum 2018, where Morina was one of the speakers.

European Western Balkans: How do you see the process of normalisation between Serbia and Kosovo? What are the biggest successes and failures of this process?

Engjellushe Morina: The process started in 2011, but if you look back, I think that efforts to have the Kosovo’s and Serbia’ societies normalise relations have been going on for a very long time. And any every one of them consisted of different phases. So we have status talks and that turned into Athissari plan which was not very well endorsed by everyone. So, the new process was introduced through the dialogue in which was taken by EU and started in 2011.

I can’t really name any of the successes, because I always thought that it was a process that started on wrong premises. For example, there are very few people involved so there is no inclusivity in the process. When I say very few people, I mean the top political elite that is involved, without any consultative process going on in the meantime in both Belgrade and Pristina. So it is difficult to say what the successes are because it is not very transparent.

“There are hardly any successes, really. The process has not been transparent and inclusive. It doesn’t have the ownership of the local people on both sides”

So, there are hardly any successes, really. The process has not been transparent and inclusive. It doesn’t have the ownership of the local people on both sides. Therefore, there are many challenges to this day.

It’s been seven years since it started, with a lot of challenges, with a lot of talks, but it is also a process that is changing its focus into something else now. And I think that’s why everyone is talking about it and discussing what’s going to be next. It’s a hot topic again.

EM: I think that the main problem like I just said, that it’s been a process “isolated” in the hands of a very few people. So, from the beginning it lacked a consultation process with the people who were supposed to implement it. In that case, you don’t have the buy-in of the population that is supposed to implement this agreement.

This is the one problem and the other problem is lack of transparency. The process has not been transparent. So, the problems derived because the people of Kosovo and Serbia don’t understand it, there is no political will. There are a lot of fears, there are different narratives here and there about the meaning of the agreement.

EWB: Right now, ideas or proposals that both governments are talking about is this territorial exchange/partition of Kosovo/border correction. You can use a lot of different terms, but it all comes to some kind of territorial exchange within the normalization agreement. What do you think about this idea? Is it something that is feasible option, is it a better alternative to no resolution whatsoever or do you think that is maybe a remedy which is actually in itself a much bigger problem?

EM: It’s very complex, and I agree that they are using territorial exchange and border correction interchangeably, so it is not very clear what they mean, and second it is not very clear what the plan contains. The reason I think it is very complex is because all the process of normalization of relations was based on the main principle of respecting human rights and respecting the rights of minorities. In this case the rights of minorities in Kosovo, and the political participation of Kosovar Serbs.

“If we go for territorial talks and territorial focus or “border adjustments”, then the whole focus of human rights paradigm will totally fail”

If we go for territorial talks and territorial focus or “border adjustments”, then the whole focus of human rights paradigm will totally fail. And I don’t understand whether they thought what is going to happen with Serbs who do not live in the north for example, the Serbs that are living in other parts of Kosovo who are, as I understand, quite against this idea of border correction and territorial exchange.

So, if we focus the whole process into territorial arguments now, then whatever has been built in the past 20 years will go down the drain and it is not going to be, I repeat, focused on human rights and the minority rights, and the political participation of minorities and so on. This is going to be undone, because of a rushed idea or idea that is not sustainable. It’s not been discussed properly and it’s not very transparent. We don’t know what the plan is.

EM: It’s a bit of both. It’s also the effect that it will have on the whole paradigm that everything is built on the respect for minority rights. This will have an effect on this process that has been going on for a long time, but also the repercussions that territorial exchange can have on other parts of not just Kosovo and Serbia, but in the other parts of the Balkans. The very idea is something that shouldn’t have been played with. I mean this idea is also not new, it has been around a long time, but it was quite carefully avoided all the time.

“Someone needs to implement this agreement of territorial exchanges or border corrections and if you don’t have the buy-in of the people – who is going to implement these agreements in the end?”

And now it’s out in the open. The genie is almost out of the bottle. Half of it is out of the bottle and now this is problematic. Bringing it back is going to be almost impossible. But it’s really complex and it will have a lot of repercussions.

Someone needs to implement this agreement of territorial exchanges or border corrections and if you don’t have the buy-in of the people – who is going to implement these agreements in the end? So, I don’t want to even predict how complex and how messy this deal can be.

EM: I think that first of all it should include others in the process. It has to be a consultative process, with consultations going on with other elements of society, maybe Serbs of northern Kosovo should be brought in to consultations, as well as other political parties of Kosovo and Serbia. The opposition should be also part of the consultative process and try to jointly come to some kind of agreement. This obviously is not going anywhere and it’s been seven years. So, we haven’t seen any tangible results.

I think that process will have to change. It has to have a different approach and then once it’s done properly with consultative processes and involvement of others maybe there will be agreement in place that is going to be endorsed by many. And then its implementation rules would be easy.

EM: I wouldn’t go as far to say that it has a bad influence in the entire region. It does to an extent, but in a way Macedonia and Montenegro are not so affected by this, so as Albania. So, they can move ahead in terms of EU processes without having to deal and worry about what is happening with Kosovo-Serbia dialogue.

But, it does have a lot of negative influence on Kosovo and Serbia. Obviously it’s something that is been hanging there and it must be sorted out before all countries can move into the EU integration process. So, I wouldn’t go as far to say that it has negative implications for the region, but for those immediately involved it does.

EWB: Talking about the entire region – the previous decade was marked with attempts to achieve reconciliation and combat extreme nationalism, and there was an impression that this process is more or less successful, but in the last couple of years there seems to be a re-emergence of nationalism. Here in the Balkans we can see some phenomena which we haven’t seen for 20 years or more. What do you think what are the main factors for this radicalization?

EM: There are lot of factors that actually drive people and societies towards radicalization. There is a lot of work being done on this recently and usually these factors are put into three clusters, so to speak.

The individual factors may be – the feeling of uncertainty, unhappiness (of individuals) with their position in the society and so on and so forth. Then there are also structural factors like socio-economic factors, lack of perspective, lack of involvement and lack of feeling being as part of the society. There are also enabling factors, which are bad governance, unhappiness with educational system and so on.

So, these are all the factors that play a role in different intensities and push societies towards radicalization and nationalism. I think that this could be argued that as long as there are problems and disputes existing, societies are not going to generally democratize and generally they are not going to sense the feeling of development and prosperity. So, they are quite linked. The sooner one is moving forward it will have knock on effect on the other phenomena as well.

EWB: How do you see importance of foreign factors in radicalization in the Western Balkans, thinking of both  different countries from outside the region, but also conflicts happening in some other parts of the world? Is this radicalization of the Balkans imported from elsewhere or is it more related to the local problems that we face here?

EM: It does seem to be external phenomenon imposed in a way into the societies. There are elements of that, absolutely. But in general, as much as external actors are strong and influential, they do not have a lot of say, because it’s the people living the reality that can organize themselves the way they want to. It can be avoided, these kind of problems, provided that it is sensed early on.