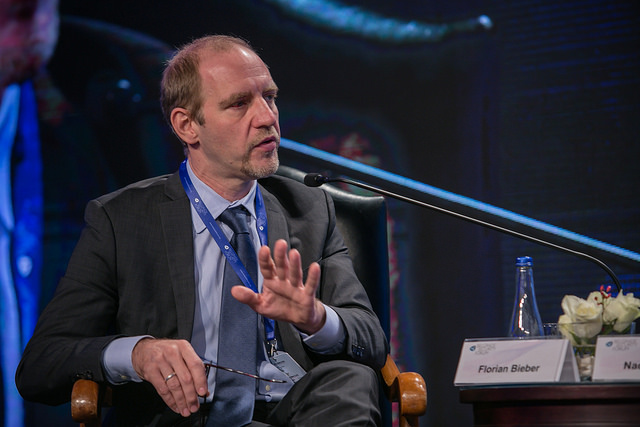 NOVI SAD – Following his participation at the Belgrade Security Forum, professor of the Southeast European Studies at the University of Graz Florian Bieber took part in a Serbian political talk show “Pravi ugao” (The Right Angle). During a one-on-one discussion, he reflected on migrations from the Western Balkans, the process of European integration of the region and the newest set of proposals on normalisation of relations between Kosovo and Serbia by Balkans in Europe Policy Advisory Group (BiEPAG).

Pointing at the fact that, in the past four years, 750.000 people have left the Balkans (including Croatia, Bulgaria and Romania) for Germany, and another 100.000 for Austria, Bieber emphasised that they are not seen as a problem in those countries, in contrast to the refugees from the Middle East, because of their quick integration into society.

However, he claimed, due to several downsides, it is not in the interest of Germany and Austria to prefer immigration over EU enlargement. For example, some Austrian companies that do business in Serbia are unable to find qualified workers any more.

“But, at the end of the day, it is not the job of Germany and Austria to motivate the keep the people from leaving, that is the job of Serbia, Bosnia and others”, said Bieber.

Talking about the European integration process, he remarked that the governments of the region are misinterpreting it: it is not about fulfilling tasks and orders from Brussels. The accession to the EU should be the conclusion of a self-initiated reform process.

Normalisation of relations in the region, for example between Macedonia and Greece or Serbia and Kosovo, is not a guarantee, but a precondition to joining the EU, Bieber emphasised. It is necessary to meet many other criteria, the most important of which is the functioning of the rule of law, because EU is a community of legal acts which have to be equally implemented in each member state.

Commenting on the support European countries give to the autocracy-leaning leaders of the region, first and foremost Aleksandar Vučić and Milo Đukanović, Bieber pointed out that some members may be thankful for the stability and security they provide. Nevertheless, he doubts that interpretation and believes it to be more true for the countries outside the EU.

“If we talk with French officials, we can hear that there already is an Orban, maybe two, within the EU, and that we do not need a couple more. This is why France and some other countries have decided to block the beginning of negotiations with Macedonia and Albania this year”, underlined Bieber.

Asked if the accession of Western Balkans will be in focus in 2019, Biber answered negatively, listing a number of reasons – finalising Brexit process, elections for the European Parliament and potentially unclear power balance in the new Commission.

Right-wing parties are divided on the question of EU enlargement, reminded Bieber. “And the centre will not be able to support it, because it is very unpopular in the member states”, he added.

However, according to him, enlargement is unpopular because many citizens consider the accession of Turkey under it. “But there is a way to explain it to the citizens – for example, by pointing out that the population of the entire Western Balkans is 3-4% of EU’s population.”

When it comes to BiEPAG’s newest text on Kosovo-Serbia relations, published in NIN and Koha Ditore, Biber emphasised that the talk on borders is short-sighted and obsolete, and proposed a quality dialogue instead.

“A solution must be achieved, but not in six-month time, there should not be a pressure in that regard. The agreement is significant because it is a precondition for the progress of Kosovo’s EU integrations – it cannot become a candidate country if there are five members that still do not recognize it”, said Bieber.

He stressed that he is in favour of implementing Brussels agreement, which includes the formation of Association of Serbian municipalities (ASM). It has not been formed because there is no precise definition of what it should be. According to Bieber, it should be a form of cooperation between Serbian municipalities which would have a higher degree of autonomy than they do know, recognized by the legal system of Kosovo and possessing the mechanisms for implementation and oversight. An overseeing body should not be the EU High Representative, but some other official, whose only task will be the ASM.

Bieber emphasised he is against border change, because it would be ethnic borders, and some Serbs and Albanians would remain on the wrong sides. What would the position of Serbs in Gračananica and Štrpce (south of Ibar river) look like if they became an even smaller minority, while today they at least have 10 representatives in the Assembly and other guaranteed rights.

“The protection of the minorities currently exists in the legislation and it is implemented to an extent. The situation is not ideal, but it is much better than 10 years ago, and it keeps improving. The lower the tensions between Serbia and Kosovo, the easier it is to protect minority rights”, he emphasised.

He explained that the President of Kosovo Hashim Thaçi is the only official in Pristina that supports the idea of border change, which is otherwise extremely unpopular and lacks support from 80% of population.

No commission for reconciliation within the region can solve interstate and interethnic relations by itself, added Bieber. A regional process, such as RECOM, is needed, but the countries do not support it.

“Neither Vučić nor Thaçi are ready to deal with either their personal past or the past of their country”, he said.

“With the new Commission in Brussels and unstable Kosovo government, I do not see an agreement being reached next year. And the case of Macedonia and Greece shows us that, even if it is reached, it is meaningless if it is not implemented”, concluded Bieber.