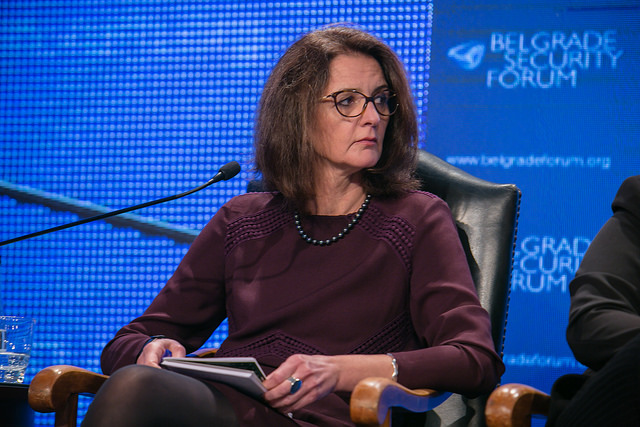 BELGRADE – “I think that what happened at the London Summit raises a very important question – can the initiatives that emerged from the bottom-up succeed if they are not supported from outside”, stated Dr Denisa Kostovicova, Associate Professor of Global Politics at the European Institute and the Department of Government at the London School of Economics and Political Science for European Western Balkans at this year’s Belgrade Security Forum, where she participated in a session on regional reconciliation.

One of the topics Professor Kostovicova has focused on in her research is a civil society initiative to set up a Regional Commission (RECOM) for establishing the facts on war crimes and other serious human rights violations on the territory of former Socialist Federative Republic of Yugoslavia.

Despite gathering more than 500.000 signatures across the region, RECOM was not supported by all governments, and was not on agenda of the London Summit in July.

“In other words, the question is whether we should be rethinking some sort of more explicit support on the part of the EU for the RECOM process, because it is clear that even when something is achieved at the level of civil society, it obviously doesn’t have a buy-in on a state level, which is necessary”, she added.

Asked whether there is an alternative way for the region to achieve substantial progress on the issue of reconciliation if RECOM process fails, Professor Kostovicova stressed that transitional justice initiatives can never be reduced to one type and always have to be taking place on several fronts, but, in the sense of recording the facts, RECOM is quite unique, and thus without real alternative.

“It is very important to stress that there are civil society organisations that have recorded the facts of war crimes. However, and this is why RECOM insists for this to be a interstate process, it is only the state involvment that can give legitimacy to this facts”, she reminded.

“As long as the initiative stays on the civil society level, however important these organisations are, effect is not going to be as strong and important as when it is supported by the states”, Kosotovicova concluded.

[EWB Interview] Stojanović: RECOM is a prerequisite for reconciliation