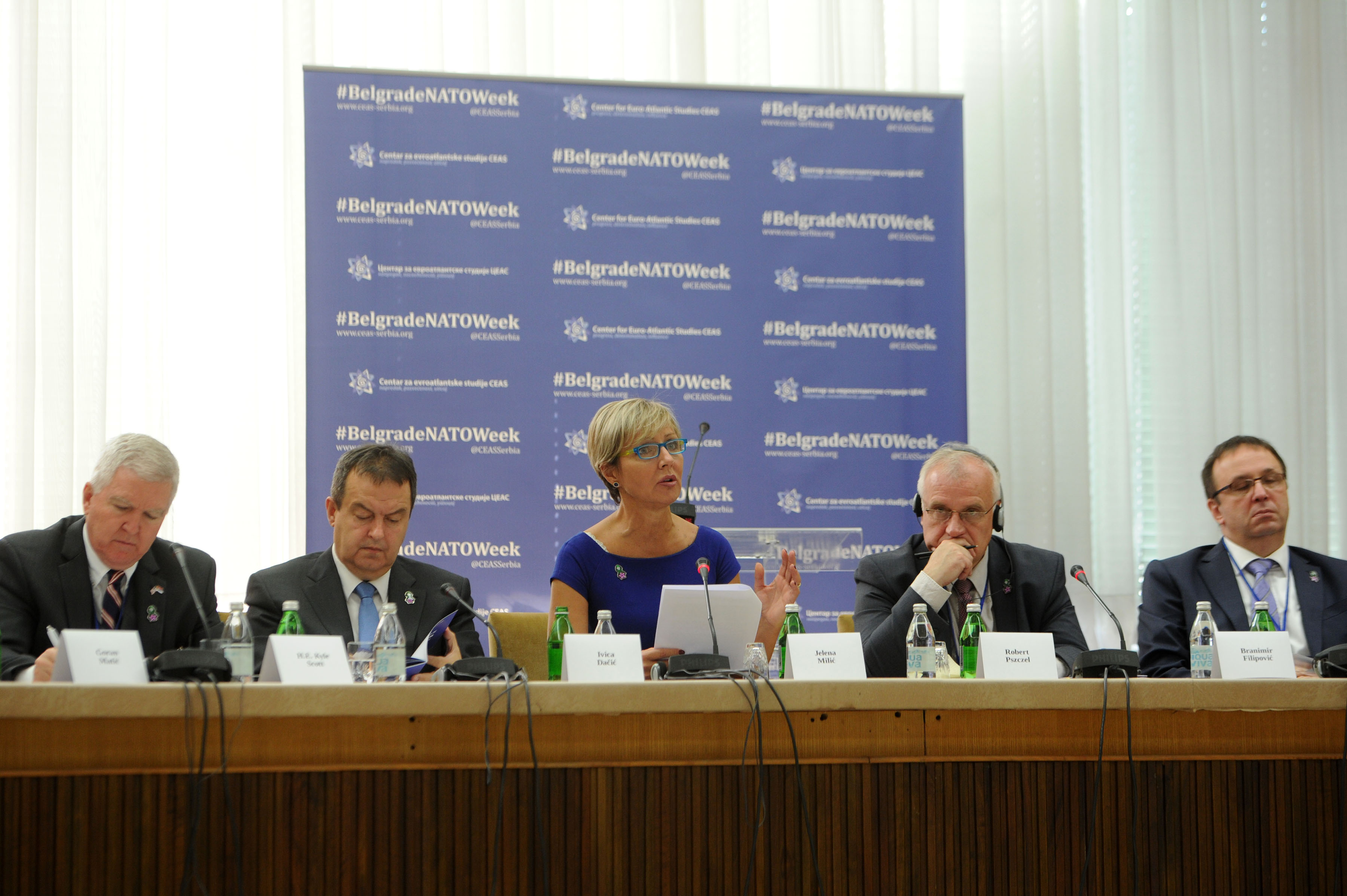 BELGRADE – Sixth Belgrade NATO week, organised by the Center for Euro-Atlantic Studies (CEAS) and supported by NATO’s Public Diplomacy Division and US Embassy in Serbia, started today in the Palace of Serbia.

Milić emphasised that this year’s NATO week takes place in the time of interesting geopolitical circumstances. “The conditions for solving decade-long conflicts in the region have been fulfilled. Some leaders in the region are ready for a compromise”, she said, adding that misinformation coming from both inside and outside the country has to be confronted.

It is the time for Belgrade and Pristina to reach a multidimensional binding agreement that would contribute to peace and stability in the region, Milić underlined. Some Western countries have shown a more flexible approach towards the issue since the summer, she reminded.

On the other hand, there is a certain skepticism of some other actors, who believe that particular aspects of the agreement would spark conflicts in the region. “Some of these arguments better apply to the 1990s and early 2000s, the situation is significantly different nowadays”, Milić said.

She stressed that CEAS supports border correction between Serbia and Kosovo, which implies that the four municipalities in the northern Kosovo would become a part of Serbia, as the least bad solution. It is not an issue of creating ethnically pure countries, which can be seen from demographic statistics, nor it is a division of Kosovo, because it is a relatively small territory, she explained.

“Multiculturalism is, of course, a noble idea, but it cannot be an ultimate goal without a democratic context”, Milić concluded.

“We are aware that Serbia-NATO relations are delicate and carry the burden of the past – we have differing views on it, and that is a reality. But, we also have an obligation and responsibility to ensure stability”, said Minister Dačić.

He reminded that Serbia’s chosen path is further development of relations with the Alliance, but within the context of military neutrality. After a successful conclusion to the first cycle of the Individual Partnership Action Plan, preparations for a second one are underway.

“We respect the choice of our neighbours to join NATO, and expect understanding for our cooperation with non-NATO members. Those relations are not undermining our relationship with NATO”, said Dačić.

He added that Serbia expects of the Alliance to understand its priorities, at that is first and foremost Kosovo, the main security challenge for Serbia. The only possible solution in that area is a compromise, Dačić emphasised.

Serbia is against the formation of Kosovo Army, because it would violate UN SC Resolution 1244, he said, adding that it is important to receive guarantees that Kosovo Security Forces will not enter north without the permission of KFOR and the Serbs who are living there.

US Ambassador Kyle Scott confirmed that the Serbia-NATO partnership does not imply entering the Alliance through the back door and that United States respects Serbia’s military neutrality.

“Why are we here, if Serbia does not want to become a NATO member? There are two reasons – common goals and partnership”, stated Scott.

According to him, those common goals include peaceful, stable and united Europe. He also stressed NATO’s support to Serbia’s EU membership.

“Serbia has just hosted a NATO exercise – who says that the Western Balkans cannot change and that we cannot be optimistic about reaching an agreement between Belgrade and Pristina”, said Scott.

He also listed the benefits of NATO partnership: resources, training, research… “US wants to play an even better and more positive role”, Scott stated.

As a representative of Public Diplomacy Division, Robert Pszczel said that the Alliance has been supporting this event for years, because of the importance of debating the planned topics and subjects. There is no other agenda, he emphasised.

“What is said in Serbia, also travels out to the region”, he further stressed the importance of the event.

Reflecting on the activities of political actors in the region, Pszczel said that he, as a football fan, knows that half of the victory depends on the approach, and that this is applicable in other fields as well.

Those who are tackling regional issues should adopt this position and do away with some old myths, Pszczel concluded.

Immediately after introductory speeches, the first panel, titled “Opportunities and future plans for Serbia-NATO cooperation” took place. Apart from Mr Pszczel, acting Assistant of the Minister in the Sector for Security Policy of the Ministry of Foreign Affairs Branimir Filipović and Director of the Office of the National Security Council and protection of classified data Goran Matić also participated.

Asked how well Serbia used the first cycle of IPAP, Filipović answered that the mutual estimate is that more than 60% of the goals were fulfilled, 30% of them are long-term ones and thus continue within the second cycle and only two to three percent of the goals were not fulfilled.

He used the opportunity to further emphasise the benefits of Serbia’s cooperation with NATO, such as Science for Peace and Security Programme, which enabled researchers from academia and civic sector to take part in these fields, military projects aimed at establishing integrity and crisis management exercises.

Answering the question on the awareness of these benefits, Matić said that there are problems in that sense, the main ones being historical relations, first of all 1999 bombing, as well as lack of enough media representation.

Reflecting on this subject, Pszcel stressed that, for example, during the visits of Secretary General Jens Stoltenberg, many positive things can be heard. However, in other situations, the leading media represent the partnership as “mixed” at best.

“We are open for a debate, but it has to be grounded in facts”, Pszczel said.