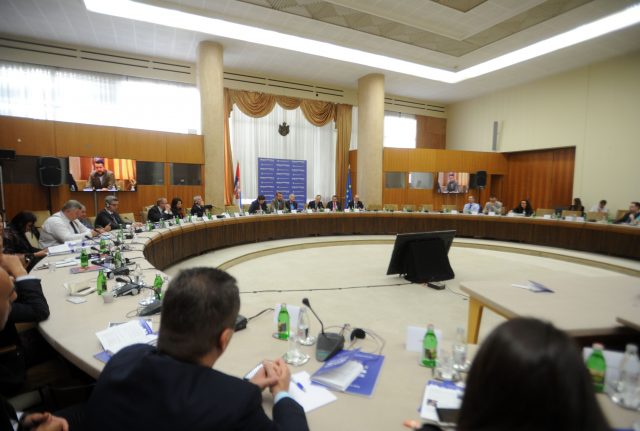 BELGRADE – Both the arguments for and against border change were herd during the fourth panel discussion of Belgrade NATO week, titled “Challenges facing Belgrade-Pristina negotiations and influences of a potential comprehensive multidimensional agreement on regional stability”. A public opinion survey on the subject was presented as well.

Gedmin expressed his opinion that some assumptions which form the frame of the debate should be challenged – especially those that the region of Western Balkans desperately wants stability, as well as that it wants to be a part of EU.

The Union is not relatively coherent, trustworthy and focused on Western Balkans any more, he emphasised. The environment has changed significantly, and EU will be much more different in the future.

In his view, the reasons behind those developments are the rise of populism across Europe, especially in Germany, as one of its most important countries, Brexit, new policy of US administration and other key changes.

Stefanini, former foreign policy adviser of the president of Italy, assessed that the negotiations between Belgrade and Pristina have reached a point in which they cannot move forward without a “political leap”.

“Both Serbia and Kosovo should be satisfied with what they have achieved s far, but also should not accept the status quo“, said Stefanini, emphasising that it would leave Kosovo without UN membership, and Serbia without EU membership.

He added that Serbia is actively blocking Kosovo’s membership in Interpol, although this country needs it. That illustrates the harm of the “zero-sum” approach to the negotiations.

“The point is not when the borders will change, but how – by force or by a mutual agreement”, said Stefanini. According to him, that agreement should include issues such as property and religious sites, as well as mutual recognition and normalisation. It should be supported via consensus, preferably through elections rather than referendum.

Professor Joseph stressed that the contemporary history of Kosovo does not begin in 1999, but ten years earlier, with Slobodan Milošević’s rise to power and loss of Kosovo’s wider autonomy. The Albanians were excluded from health and education system, he said.

After that, a several years of peaceful resistance of Kosovar Albanians, led by Ibrahim Rugova, ensued. Its failure, as well as crisis in Albania that enabled easy supply of weapons, led to the rise of Kosovo Liberation Army, Joseph reminded.

It is therefore important, according to him, that no side in the dialogue should monopolise the victimhood, because it only raises the demands in negotiations, as a form of compensation.

The term “correction of borders” is not the right one. The correction is what happened between Kosovo and Montenegro and Kosovo and Macedonia, Joseph explained. This is why this proposal should be correctly dubbed as exchange of territories.

“It is upon the proponents of this policy to prove why it will not be destabilising”, he said, stressing that it is in contrast to the long-term strategy of international community, which has been against ethnically-pure countries, because something like that is impossible to achieve in the Balkans due to population structure.

This is why something similar to Prespa agreement between Macedonia and Greece is needed, accompanied by the continuation of Euro-Atlantic integrations of the region.

A differing view was expressed by Jelena Milić. She reiterated the point made in her earlier speech, in which she emphasised that multiculturalism is a good idea, but the question is whether it should be achieved before or after democratisation according to the liberal model, which is still not finalised in Serbia.

The territory in question is too small for the move to be qualified as “ethnic division”, added Milić. She also emphasised that this development would encourage Bosnia and Herzegovina to recognize Kosovo, which would lead to a leveled region in which the security dynamic could be better developed.

“What about the people in Belgrade, whose lives are also negatively impacted with the unresolved status of Kosovo”, she asked.

Milić also assessed that the Serbian opposition is more regressive than the government when it comes to the issues of Kosovo and relationship with NATO and Russia. The maneuvering space of the government is also narrower due to the disagreement with Serbian Orthodox Church and a part of security forces.

“From the moment US became more flexible on this subject, a strong campaign about the consequences of NATO bombing began”, she added.

Joseph disagreed with her position, and reiterated his concern for the Serbs in central and southern Kosovo if the north really becomes a part of Serbia.

Survey: 36% of the citizens would vote for demarcation, 34% against

A survey conducted for this occasion by CeSID and CEAS was also presented at the panel. Bojan Klačar pointed at some of the more interesting results concerning the topic.

The survey was conducted at the end of October and beginning of November, among 1,010 citizens of Serbia (without Kosovo).

If a referendum on demarcation according to the proposal of the President and the Government, supported by NATO and EU, was held tomorrow, 36% would vote for, 34% against, while 22% would abstain, Klačar explained, adding that the percentage of people who hold an opinion on the subject is very high (92%) given the fact that it has been in the public sphere for a relatively short amount of time.

The largest number of citizens thinks that US is an actor that would support the demarcation (42%). EU comes second with 24%, and then NATO and Germany with 17% each.

The majority of the citizens (53%) believe that Kosovo remaining a part of Serbia should be defended at any cost, while 22% think otherwise. On the other hand, 63% of the citizens believe that the independence of Kosovo should not be accepted as the new reality, with 12% disagreeing.

Even though uncompromising position on Kosovo is still the held by majority, its support is not as big as in previous years, Klačar remarked.