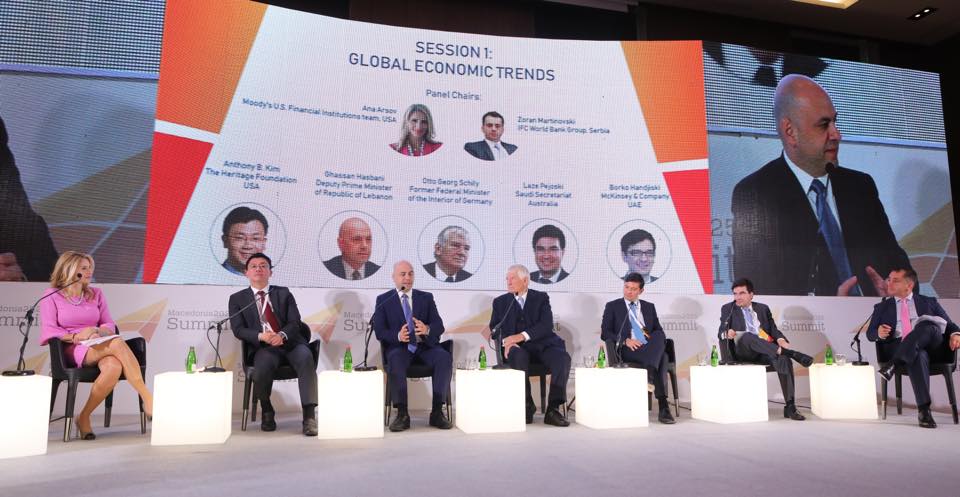 SKOPJE – Small countries and economies could have a chance in increasingly globalized economy exclusively through education and the creation of high-quality human capital, first panel of the “Macedonia 2025” Summit has concluded.

The panel, titled “Global Economic Trends and how they Affect the Region” was dedicated to the macro-perceptive of the economy, and as trying to answer the question how can the small economies of the Western Balkans find comparative advantage on the global markets.

Editor of the Economic Freedom Index at the Heritage Foundation Anthony B. Kim stated that Donald Trump’s election was the driving force behind global business, as Trump, unlike his predecessors, has an extensive business background, has understood the importance of the business community, which has subsequently led to deregulation and tax cuts, as well as economic growth.

In his estimation, global economy is growing, but there is no “economic war” between US and China.

Asked about the reforms which need to be implemented by countries in the region, Kim said that governments should be “proactive” in tax reforms, more decisive in their implementation, but that they should also show more support to the commercialization of innovative ideas.

“Secret of the success for many of the emerging economies is low and balanced taxation policy. Whether you agree with current US policy, you have to acknowledge it is proactive“, Kim said.

Former German Interior Minister Oto Georg has said named Germany as the “economy locomotive” of the entire Europe, adding that although the country has no natural resources, such as gas or coal, it has human capital.

„Germany doesn’t have natural resources – our main resource and basis of success is in the work force”, Schilly said, adding that “dual education system that exists in Germany is the best in the world and allows a comparative advantage for the country”.

For him, future for any country lies in some of the high-tech fields, such as IT, but has also stated that Europe should be concerned with the fact that “there is no European response to Google, Facebook, Apple Microsoft”

Lebanon’s Deputy Prime Minister and Minister of Public Health Ghassan Hasbani said that his country is similar in size and population to the countries in the region, and that it has found its chance for development in strengthening the banking sector, but that for small economies, people remain the most important thing.

„Lebanon is probably the largest per-capita refugee community, while the exports towards Gulf has decreased. This is why we had to support banking sector for local financing“, Hasbani, said.

He continued with stating that Lebanon ranks first in healthcare in whole of the Middle East and that it has one of the best education in the region, aimed mainly towards technical expertise.

„This is why brain drain isn’t a problem for us – it isn’t a problem if you export, but continue to produce (expertise). We will always have enough educated people who will stay in the country and contribute to the domestic economy, and Lebanon now receives 7 billion dollars in remittances alone”, he concluded.

Borko Handjiski,  Associate Partner with McKinsey & Company from the United Arab Emirates, said that countries that achieved strong economic growth of those who relied on investment, domestic and foreign exports, responding to global trends in the economy, building civil society and building stable institutions.

„Only 18 countries in the world have succeeded in having more-than-5-percent economic growth in the last 20 years. Strong institutions are important for growth, productivity and investments”, he said.