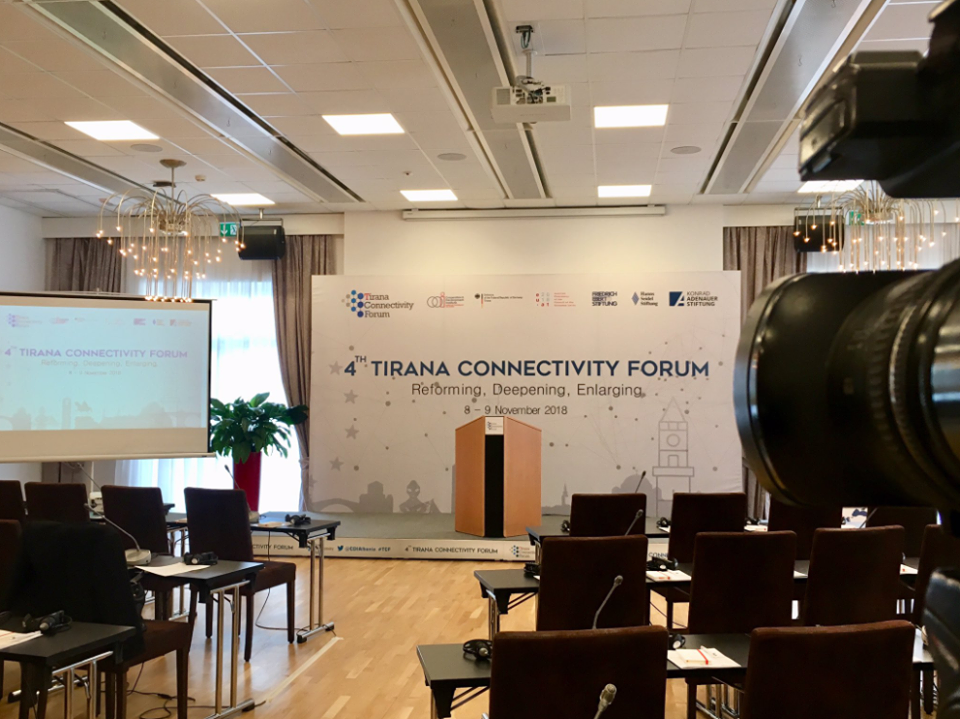 Keynote address was delivered by President of Albania, llir Meta, who said that the Berlin Process has developed a more connected region and intertwined regional projects with international mechanisms.

Mr. Meta noted that the brain drain and youth unemployment are a big issue and agreed that more needs to be done to tackle them. Speaking about EU and NATO enlargement, he said that it will happen when “our countries are ready” and adding that it “remains indispensable strategic projects for the peace, security and stability of the region”. “We need to focus our energy in implementation of the key reforms”, he concluded.

Luigi Soreca, Head of the European Delegation to Albania, pointed at the importance of both Summit in Sofia and in London where main agendas were connectivity in the region. “Main building block of the [Berlin Process] agenda is to establish the core network which will connect capitals, main economic centers and ports in the region”, he said and added that European Commission concluded that about 80 thousand new jobs could be created in the region if the economies are more connected.

For Johann Sattler, Ambassador of Germany to Albania, there are two core regional issues. First one is solving the bilateral issues among the Western Balkan countries and the other is creating benefits and opportunities for all its citizens. He announced a meeting that will be organized by Sebastian Kurz, Chancellor of Austria in November that will gather all Western Balkan leaders to talk about Regional Economic Area.

Future of the Berlin Process, negotiations and reforms

The panel ‘Reforming and Negotiating’ underlined the necessity of use of “multilayered connectivity” concept and of institutional governance. It discussed the expect results, respective cost and relevant challenges expected by the implementation of 6 Strategic Initiatives; the role of key reforms in negotiation dynamics, and the reinvigorating contribution of the Berlin process.

Etilda Gjonaj, Albanian Minister of Justice, in her opening remarks concerning reforms and negotiation process said that Albanian judicial reforms were needed, because majority of the Albanian population believed that judiciary was corrupted and connected with political and interest groups. The reforms were conducted in association with foreign experts, because “they wanted to learn” better models.

She is especially proud of the vetting process that, in her opinion, is doing the job even tough a lot of people were skeptical. “I am very happy that European Commission is trying to copy Albanian model in other member states with similar problems”, Gjonaj concluded.

The subject of the future Berlin Summit in Poznań 2019 was covered by Wiesław Tarka, Ambassador and Coordinator for the Summit. He pointed out that next year Poland is celebrating 15 years since its accession to the EU and it is symbolic for the Summit to be held in Poznań since Poland could be a model for Western Balkan states.

Six Flagship Initiatives will be incorporated into the agenda and the priority of the Summit will be economy and regional connectivity. Summit will be held in the first week of July, but the meeting of the ministers will be “probably held sometime in the spring”. Tarka also announced two new themes of Berlin Process in form of two complementary events: EU-Western Balkans Business forum and forum that will gather local governments and foster regional cross-border cooperation.

The region will be high on the agenda of the Romanian Presidency of the EU Council, said Alexandru Ene from Romanian Ministry of Foreign Affairs, but also added that it is on Western Balkan countries and their leaders is to do most of the job. “There is a clear roadmap set in the last European Council decision and we will assess the pace of the democratic reforms and values in the region”, he concluded.

Klaus Wölfer, Director of the Department for EU-enlargement and South-East Europe at the Federal Ministry for Europe, Integration and Foreign Affairs of Austria, said that Western Balkan countries need to be united and achieve compromise in solving their problems.

“Investments is a win-win for all of us, it will stabilize the region”, said Majlinda Bregu, General Secretary-elect of Regional Cooperation Council, adding that it is a key driving force for the reformation of the Western Balkans. She emphasized the need for investment in “people to people” connectivity and in better education that is not focusing only on university degrees, but also in transferable skills.

Christophe Hillion, Professor at Europa Institute University of Leiden and Centre for European Law in Oslo pointed out that an increasing volatile neighbourhood of EU, Brexit and rule of law crisis are three developments explaining the existence of “deepening” in the EU agenda and adding that “this is translated by more consolidation, and not necessarily as more integration”. “If the EU’s conditionality is to operate [in Western Balkans], it needs to get her house in order in regards for example to rule of law. Otherwise it’s message will sound hollow.”, he concluded.