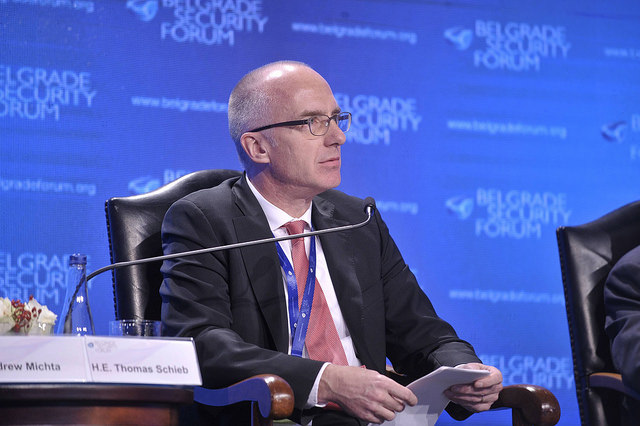 BELGRADE – It has been speculated whether Germany’s position would change when it comes to the idea of demarcation, but that will not happen, German Ambassador to Serbia Thomas Schieb said for regional television N1.

He added that Commissioner Johannes Hahn and represetatives of the United States have not given a green light to the idea either, but rather refrained from pushing for an explicit solution so that the sides would have a wider maneuvering space.

German Chancellor Angela Merkel and President of Serbia Aleksandar Vučić met in Paris over the weekend. It was their first official meeting since Merkel voiced her opposition towards the idea of changing the borders of Kosovo.

“We are going to consider the position of the US, which I do not want to interpret right now. We will see whether we agree or not”, Schieb stated.

Ambassador Schieb stressed that it was a good and long meeting, held at the initiative of the German Chancellor in order to discuss Belgrade-Pristina dialogue, normalisation of relations between Serbia and Kosovo, economic relations and the situation in the region. “It was a general exchange of views on political and economic issues.”

According to him, Germany is worried about the implication potential demarcation agreement would have on regional relations. There is a host of other issues – property rights, minority rights, status of religious sites – which are being overshadowed by the speculations about border change.

Germany welcomes the most recent meeting of Vučić and Thaçi in Brussels. “The circumstances are by no means easy, but that was a good step forward and we hope that the trend will contiune”, emphasised Schieb.