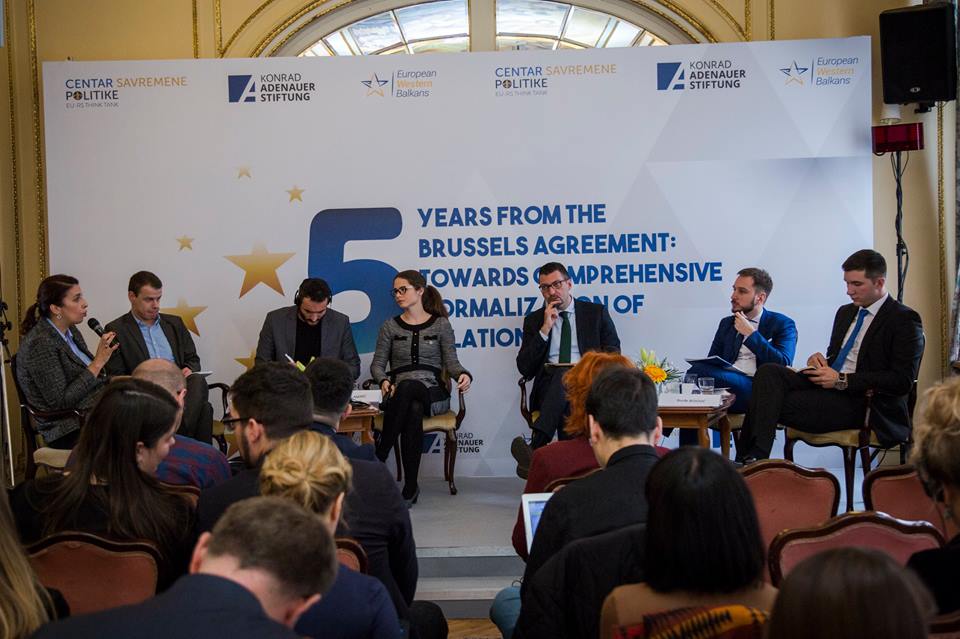 BELGRADE – The second panel discussion of the conference “Five Years from the Brussels Agreement: Towards Comprehensive Normalization of Relations”, organised by the Centre for Contemporary Politics and Konrad Adenauer Foundation, has tackled the issue of the potential normalization agreement between Kosovo and Serbia and its content.

In that context, a new publication focusing on the issue, authored by Đorđe Bojović, MA candidate at London School of Economics and Nikola Burazer, Programme Director of the Centre for Contemporary Politics, has been presented as an introduction to the discussion.

“Kosovo must be allowed to join international institutions and a formal recognition from Serbia isn’t necessary”, emphasised Bojović. If Serbia wants to join the EU, this is the way it will need to go.

Good Friday Agreement between UK and Ireland should be looked up to for inspiration when it comes to protection of minority rights, he added.

“It is often overlooked that a land swap would mean recognition of whatever is left on the other side”, Bojović also reminded.

“The main point of this agreement is to clarify Kosovo’s status and enable it to move on with EU integrations. Everything else is a bonus – therefore, we argue in this publication that other issues need to be included”, added Burazer.

Speakers of the panel joined the discussion, moderated by journalist Ljubica Gojgić, immediately after the presentation of the publication.

“Lack of representatives of Governments of Serbia and Kosovo at this conference shows the (lack of) success of this process”, pointed out Eraldin Fazliu, editor of BIRN Kosovo.

Even though he expressed his opposition to a “second layer of government” in Kosovo, he underlined that some aspects of Association of Serbian Municipalities have to be implemented, and that there needs to be dialogue with the representatives of Serbian minority in that regard.

President of the Board of the European Policy Centre Srđan Majstorović criticized the lack of involvement of the public and national institutions such as Parliament in the negotiation process. “The negotiations of this complexity need to be secret to a certain degree, but at least national parliaments need to be informed”, he stressed.

“I am very much in favour of the “enlightenment approach”, which appealed to the reason, and was advocated for a short while. But today, it is only appealed to the emotions”, said Majstorović.

He also remarked that the EU High Representative Mogherini has not done her job well. “You should not push the timeline of the agreement to fit the tenure of EU institutions”, emphasised Majstorivić.

“(President of Serbia Aleksandar) Vučić doesn’t need to fight for the rights of Kosovo Serbs anymore, because now he can argue that they won’t be respected”, said Milica Andrić, activist and researcher from North Kosovo.

In her view, the most important issues that need to be covered by a future agreement should be freedom of movement of Kosovo Serbs and their dual citizenship, as well as property rights.

She added that we should start using the alternative name for the Association of Serbian Municipalities. It should be a Coordinating Body, with the authority to adopt secondary legislation on education, healthcare and other issues important for the everyday life.

Marko Milosavljević, Programme Coordinator, Youth Initiative for Human Rights, reflected on the processes of reconciliation and dealing with the war crimes in Serbia and Kosovo.

“War criminals are national heroes, and this is the context in which we have to talk about peace agreement between the two sides”, he said.

According to him, the future agreement needs to give a positive answer to a question of whether these two societies/countries should be multicultural.

Asked about his proposals for the content of a future agreement, he remarked that the cultural cooperation has been undermined.  “We also need clear mechanisms on how to implement what is left from the Brussels agreement, and a basic document which would guarantee that there will never be another war between Kosovo and Serbia”, he concluded.