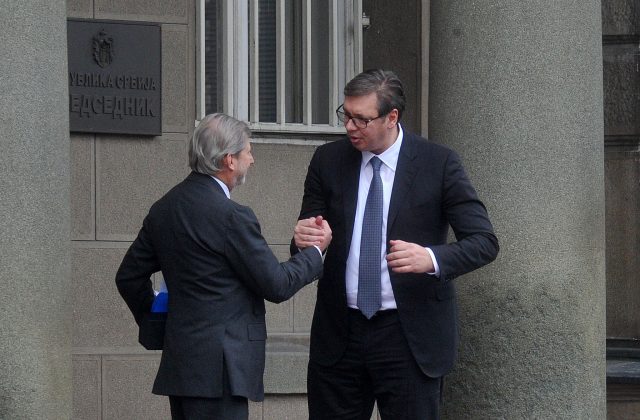 BELGRADE – European Commissioner for Neighbourhood Policy and Enlargement Negotiations Johannes Hahn met today in Belgrade with President of Serbia Aleksandar Vučić, with whom he spoke about recent decisions of Kosovo Government to invoke and raise tariffs on Serbian and Bosnian goods, as well as regional stability.

The meeting has preceded Hahn’s visit to Pristina, which was announced on Friday.

Hahn stated today that he will call on interlocutors in Pristina to unblock regional cooperation and trade and stress the need to return to the dialogue.

“Good meeting with President Vučić in Belgrade where we discussed the introduction of tariffs on goods from Serbia and BiH by Kosovo, which obstructs CEFTA, REA (Regional Economic Area), regional cooperation. We agreed on the urgent need for de-escalation”, wrote Hahn on Twitter.

President Vučić thanked Commissioner Hahn for his understanding of the situation and his willingness to solve the problem, as well as his support to Serbia on its European path, emphasising that further progress of the region depends on maintaining peace and stability.

He stressed that Serbia is ready to continue with the dialogue with Pristina, after it revokes its “irresponsible moves”.

“Serbia will not answer with any countermeasures, because it wants to remain a reliable partner both in the region and in Europe and the world”, reiterated Vučić.

Stoltenberg: KFOR will provide stability and security in Kosovo