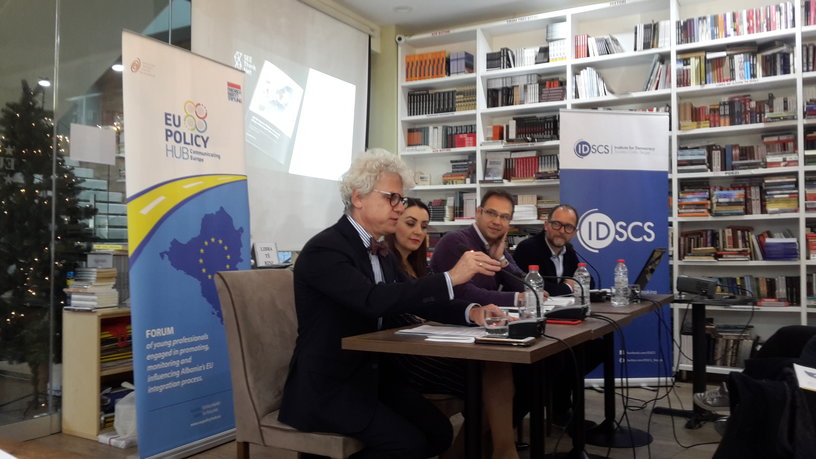 The event was moderated by Dorian Jano, the Executive Director of EU Policy HUB. The welcoming remarks and opening speeches were address by the Albanian Deputy Minister for European and Foreign Affairs, Artemisa Dralo and the Ambassador of the Republic of Poland in Tirana, Karol Bachura. The main findings of the policy paper, “2018 Western Balkan summit: 3 key takeaways from London”, were presented by Zoran Nechev, the SEE Think Net coordinator and senior researcher at the Institute for Democracy ‘Societas Civilis’.

In her opening speech, the deputy minister Dralo emphasised not only the Albanian government commitment to the four main pillars of the regional cooperation (trade, investment, mobility and digital agenda), but she also highlighted some of the main accomplishments achieved so far. More than the political commitment, it is the operationalization of certain initiatives that has brought concrete results. The ultimate goal of the promotion of further trade integration is to improve the attractiveness of the region for foreign and intra-regional business, where lately the trade with the countries from the region has been increased.

This year, the Ministers of Economy of the Western Balkan countries have signed a Joint Declaration on the Regional Investment Reform Agenda (RIRA) introducing a dynamic regional investment space. Mutual recognition agreements of professional qualifications in sectors of mutual interest will facilitate regional mobility of high qualified workforce. Moreover, Albania has been progressing in switching from analogue to digital broadcasting, and now the aim is towards coordinating policies in digital matters for a regional broadband agenda, miming the European Digital Single Market.

Ambassador Bachura generally reviewed what has been achieved through the Berlin Process from the Warsaw’s viewpoint, and he also discussed the ideas and priorities so far of the Poznań Summit. The Berlin Process needs to be praised not only for the additional political commitment it gives to the European integration process but mostly for its tangible results. For example, policies towards a roaming-free region, should be the same importance as visa liberalization was for the Western Balkans.

The importance that the Polish government attaches to the Poznań Summit, is manifested in the inclusion of the Balkan partners to bring forward their own expectations and proposals to be covered in the summit programme, the high level meetings at this early stage to discuss and outline the priorities the Polish government intends to focus on, and the appointment of the Secretary General as the national coordinator of the event. The next summit in Poland will keep the momentum of the process and raise the political visibility of the region in a period when the European Election will be held and the new European Commission will be formed, thus a strong signal is send to the new EU institutions. Furthermore, the presidency of a Central Eastern European country is an added value for the Western Balkans, as they have previously experience the process of EU accession, and further more they can share the Visegrad 4 as a model on successful regional cooperation. The novelty of the Poznań Summit will be the cultural dimensions on the agenda of the Polish presidency, to fostering cultural connectivity between the countries of the region. And with regards to security, it is still to be decided the format and if the meeting will be at a ministerial level.

Mr. Nechev presented the main point of the policy paper, giving an overview of what happened in London and what are the takeaways from this Summit. His discussion focused on the issue of the bilateral relations and the resolution of bilateral disputes between Western Balkan states and their EU neighbors, the overshadowed focus on Western Balkans priorities and the post-Brexit UK engagement strategy in the region as the main attention of the London Summit agenda.

Discussion with the audience followed the panel presentations, pointing at the key role of the youth and the Regional Youth Cooperation Office (RYCO) needs to play within the Berlin Process, the importance of civil society cooperation and the involvement of the members of the parliament at the Berlin Process.

RSF Index 2018: Governments create a hostile climate for journalists in the Western Balkans