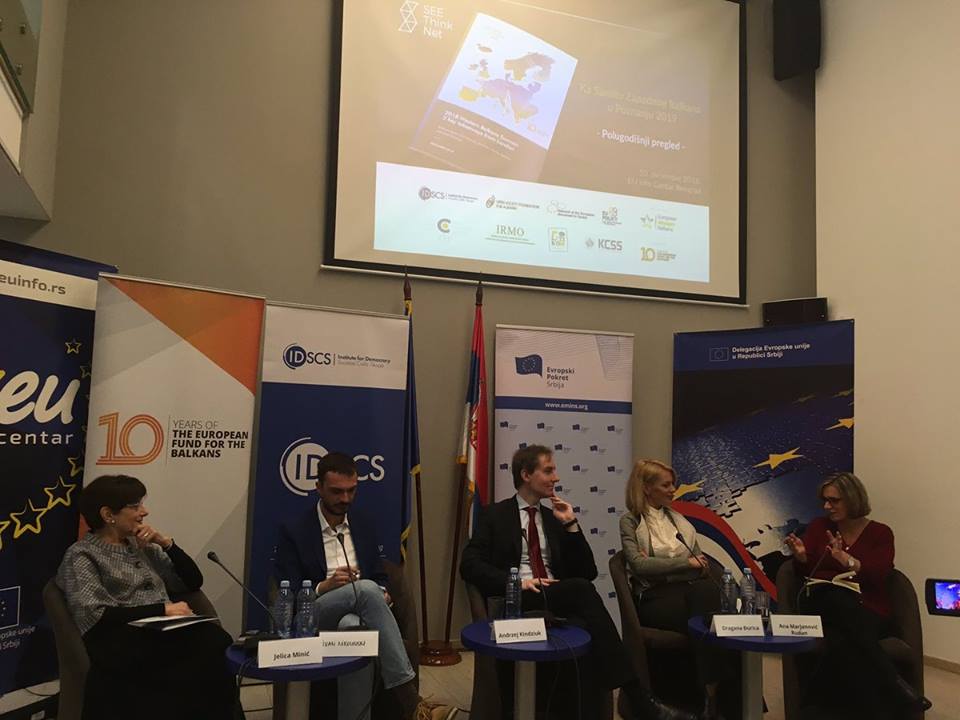 BELGRADE – Promotion of the publication “2018 Western Balkans Summit: 3 key takeaways from London”, authored by Zoran Nečev and Ivan Nikolovski from Institute for Democracy Societas Civilis from Skopje, Jelica Minić from European Movement in Serbia, Mariola Qesaraku from EU Policy Hub and Adnan Ćerimagić, has been held in Belgrade’s EU Info Center. After the presentation in Tirana on 7 December, next one will take place in Skopje on 19 December.

The event in Belgrade was moderated by Jelica Minić from European Movement in Serbia. Introductory speech was given by Ivan Nikolovski from the Institute for Democracy, who presented the activities of the SEE Think Net. The network is comprised of Institute for Democracy Societas Civilis from Skopje, Open Society Foundation for Albania, Network of the European Movement in Serbia, EU Policy Hub, Centre for European Perspective, Institute for Development and International Relations, Politikon Network and Kosovar Centre for Security Studies. Nikolovski considers that the role of civil society is to exert pressure on governments and constantly point out that unresolved issues of mutal concern do not lead to anything.

“The Berlin Process, despite all controversies that have followed, gave results and there are more and more parties interested in keeping the process”, concluded Nikolovski.

After the introduction, Andrzej Kindziuk, chargé d’affaires of Polish Embassy in Belgrade, pointed out that it is of great importance that Poland Became part of the Berlin Process and added that the process is not an alternative to the EU enlargement, but rather a complement. Given that Poland hosts the next summit, Kindziuk presented activities of that country. The Summit will be held in July 2019, with the participation of the Prime Ministers. In addition, there is a plan to host meetings of Ministers of Economy and Foreign affairs and added that meeting Interior Ministers is also possible. Focus of the summit will be local self-government and cross-border cooperation and announced that separate summit of the towns will be held in Rzeszów.

Dragana Đurica, Senior Expert at the Regional Cooperation Council, said that the Council is the “miner of the Berlin Process”, because the majority of Western Balkans Summit agendas are created by the Council. Speaking about the unified economic area of the Western Balkans, Đurica pointed out that there are four agendas which are also pillars of the council activities: trade, investments, digital agenda and mobility. “Four years ago, the discussion on this topic was impossible mission, we could talk about exchange of experience and data, but we could not talk about reform of economies”, said Đurica. She added that there are Individual Reform Action Plans (IRAP) adapted to each of the economies of the Western Balkans, including reform laws, time frame for implementation along with a list of sources of donations and funding for each country in the region.

“SEETO is a regional transport observatory that gathers a large number of stakeholders around connectivity agenda, with the aim of including our region in European transport corridors,” said Jelica Minić, Vice President of the European Movement in Serbia. She added that, in addition of infrastructure plans, there are plans for reforming transport and energy policy. Speaking about the Berlin Process, she believes that it contributed to the affirmation of the entire region’s civil society and that his role is constantly growing.

Her position on the Berlin Process is shared by Ana Marjanović Rudan, program advisor to the European Fund for the Balkans. “Every year we must explain why it is important that civil society is involved in the Berlin process, and that is putting the entire process under public control. Therefore, its participation is of public interest,” said Marjanović Rudan. She believes that it is time to correct all the shortcomings of the Process through the next cycle of summits and added that she sees the two directions of the civil societies’ activities social activism and “packing” of research into policy proposals and delivering to the political decision-makers at the summits of the Berlin Process. At the end of her speech, she concluded that “the Berlin Process is the best format within which regional cooperation takes place and it will continue to take place, as there are now more stakeholders.”