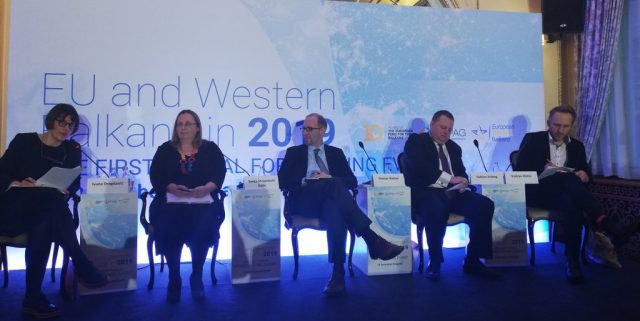 Participants of the panel; Photo: EWB

BELGRADE – European Union will not have the time for Western Balkans next year and, therefore, new energy for fight against stagnation and captured state has to be found. This was the main conclusion of the event “EU and the Western Balkans in 2019”, which took place today in Belgrade.

Panel discussion, organised by the European Fund for the Balkans, Balkans in Europe Policy Advisory Group (BiEPAG) and portal European Western Balkans, also concluded that the citizens need to focus on the quality of democracy, rule of law and activism, instead of a potential war, departure of youth and systemic deficits.

The open panel was preceded by the round table of experts, during which these topics were discussed under Chatham House rules.

Professor at the University of Graz and BiEPAG coordinator Florian Bieber remarked that the year 2018 has been a year of too high expectations, caused by the announcement of 2025 as a potential date of region’s accession to the EU, and added that the forthcoming year would offer a clear picture of the small number of successes, such as the Prespa Agreement.

He said that the Agreement in question, which was, according to him, the greatest success of the region, happened almost without any help from the EU, which further demonstrates that the mechanisms used by the Union for improving democracy in the region are weak and insufficient.

“The space for an agreement between Belgrade and Pristina is getting narrower, and EU will have less and less time to influence the negotiating process… On the other hand, the Agreement between Macedonia and Greece will come after the paying of a high political price on the internal political scene, where the lack of potential rewards from the side of the Union would represent a potential danger for the negotiations”, assessed Bieber.

Director of the Belgrade Centre for Security Policy Sonja Stojanović Gajić stated that, as long as there is a narrative of fear in the region, an open discussion on the democratization process and the rule of law will not be possible.

According to her, European Union has forgotten how the things can go wrong when it comes to fear and distrust of citizens towards the government, referring to the current protests in the Western Europe.

She added that fear does not rule over the region, but, according to the surveys, in Europe as well. The citizens of the continent are worried about terrorism, migrations and economy. In Stojanović Gajić’s opinion, fear-mongering in the Western Balkans is not “a science any more, but an art”.

“We have to work on doing away with fear in the region and on the change of the subject form surviving to quality of life and democracy… Local communities are key in fight against fear both in the Balkans and the EU. Prespa Agreement is a proof that the captured state can be set free”, assessed Stojanović Gajić.

Reflecting on the current crisis between Belgrade and Pristina, Stojanović Gajić said the communities isolate themselves on a mere mention of violence, which currently forms every relation between Serbs and Albanians, as well as the announced parliamentary elections, which are also connected to a crisis in relations.

Member of BiEPAG and Senior Researcher at the Austrian Institute for International Affairs Vedran Džihić said that “dark predictions” for 2019 were dominating during the round-table of experts, and that three basic values – EU accession, democratization and market economy – have not been able to cure depression that is ruling over the region.

“EU’s principle has been – do your homework and implement technical and administrative reforms (and you will become EU members). The problem is that the Union has fallen into its own trap, because it is significantly administered by autocratic regimes and structures”, said Džihić.

He added that the word “democracy” has lost been devaluated and lost its original virtue, but that local initiatives in communities can create a new energy if they develop solidarity, recognize each other as neigbours and gather around mutual issues and problems.

Fabian Zuleeg, Chief Executive of the European Policy Centre from Brussels, expressed his doubts over the effectiveness of citizens’ initiatives, because they have a limited potential for systematic changes, which is why it is important to do something more than an organized protest.

According to him, protests and movements can influence the solution of certain problems, especially by pointing the European public at them, but they are not a substitute for the parliamentary system.

“Europe and Western Balkans are facing similar challenges of democratic deficits, which every country has to solve by its own means… I think that it is important that we do not loose hope in EU. Despite its shortcomings, it is still worth fighting for. The Union still has a positive influence on our continent”, said Zuleeg.

Western Balkans discussed during European Council’s meeting, but not mentioned in the conclusions