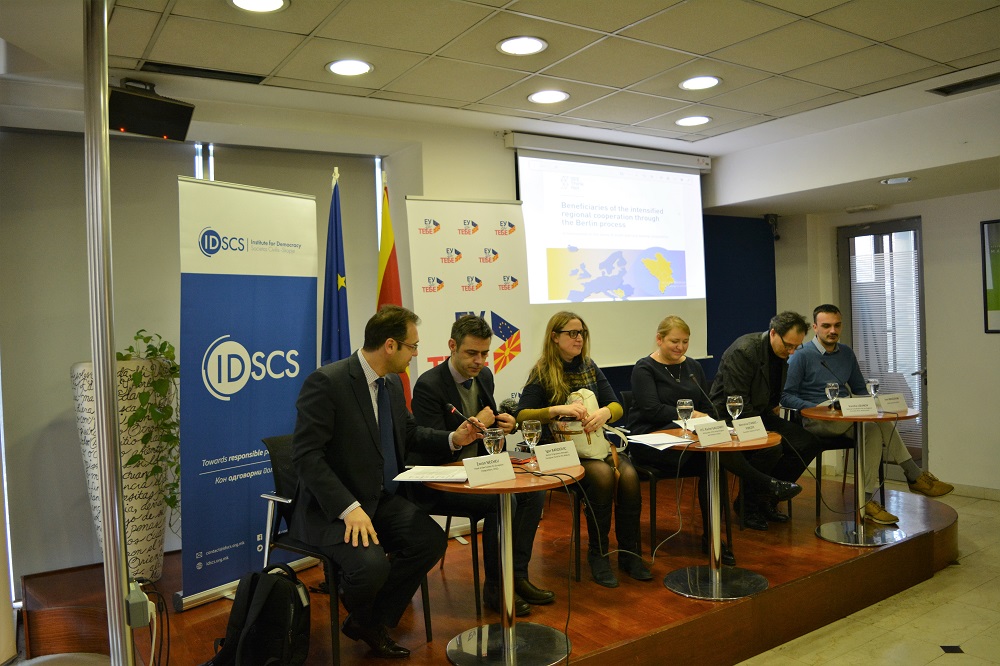 SKOPJE – A presentation of the policy paper “2018 Western Balkans Summit: 3 key takeaways from London”, authored by Zoran Nechev and Ivan Nikolovski from the Institute of Democracy “Societas Civilis” – Skopje (IDSCS), Jelena Minić form European Movement of Serbia, Mariola Qesaraku from EU Policy Hub and Adnan Ćerimagić was held today in Macedonian capital. It was organised by IDSCS, coordinator of the SEE Think Net Network – the first regional network following the topics connected to the Berlin Process.

After the introductory speech delivered by Zoran Nechev, head of the Center for EU Integrations at IDSCS and coordinator of the SEE Think Net Network, several important points and findings of the analysis were discussed at today’s event. Firstly, Berlin Process has succeeded in getting Western Balkans leaders and ministers around the table and make them talk about and try to solve open issues in the region. The process has enabled discussion about regional security, youth issues, connectivity, economic integration and other important topics. In the area of bilateral cooperation, a highlight of this year have been the Agreements Macedonia has signed with Bulgaria and Greece, thus removing key obstacles to its path towards EU.

The second important outcome of the London Summit has been the fact that, for the first time, civil society organisations have sat around the same table with leaders and ministers of the Western Balkan countries. On the other hand, despite UK’s departure from the EU, it still maintains its presence and doubles its support to reforms in the Western Balkan, and Poland, as the next country holding the EU Presidency, will focus itself on conflict resolution and connectivity boosting. economic cooperation, security and youth cooperation among Macedonia, Albania, Montenegro, Kosovo, Serbia and Bosnia and Herzegovina.

In that sense, UK Ambassador to Macedonia, Rachel Galloway, emphasised that her Government remains focused on the region, which was confirmed via the increase of financial assistance to the region of 41 million pounds in 2018 and almost 80 million by 2020. The assistance will be used for the strengthening of rule of law, judicial institutions, public administration and security system reforms. Parliaments, independent media and CSOs are also being supported, as well as fight against corruption through stronger, professional and independent institutions.

Polish Embassy representative, Veronica Staniec-Porcik, emphasised that the 2019 Poznan Summit will continue with the agenda of the Berlin Process, with the aim of raising regional cooperation of the Western Balkan countries. The novelty of this Summit will be getting to know cultural values of the region and the countries of the Visegrád Group. The goal of Poland will be to share its experience of the EU accession process. She added that, despite the fact that in 2019 EU will be much more focused on the European Parliament elections and the formation of the new Commission, Poland will, during its leadership of the process, try to ensure that the interest of EU towards Western Balkans does not decrease.

Professor Vancho Uzunov, national coordinator for the regional economic zone in the Macedonian Government, emphasised that the road for Western Balkans into the EU leads exclusively through other Balkan countries, pointing at the need of establishing of cooperation and the single market in the region. He regards the countries and their economies to be directed at one another, but that it is not easy to break down the barriers that have over the past few decades been raised between them as a result of political and national issues. These barriers make the regional approach of the foreign investors more difficult, and the same goes for the mobility of the capital and workers, and recognizing their qualifications.

After the presentation of the policy paper and the analysis of the political context before and after the London Summit, Ivan Nikolovski, Junior Researcher at the IDSCS, concluded that, despite the debates that have been following the Berlin Process, it can still be described as a success story, because of the visible results in many areas of regional cooperation – from bilateral issues, regional economic integrations, digitalisation, youth issues, security. Because of that, it is necessary to find ways of utilizing the Berlin Process as a platform for further development of regional cooperation as a special, but complicated and parallel process to the EU accession.

Igor Bandović from the European Fund for the Balkans concluded that the Berlin Process contributed to increase of intensity of region’s progress, but also that many issues remain unresolved. He believes that the coming year, during which EU will be preoccupied with the elections, represents a good opportunity for furthering the progress and for Western Balkan countries to show maturity, which will be of great importance for the EU membership path.

Vučić: United States show their interest, but we are far from solution