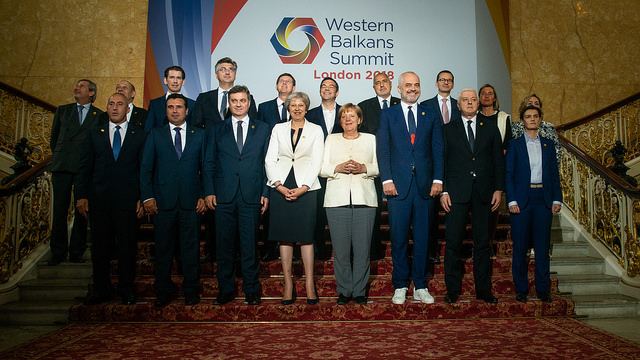 The year 2018 has seen a series of developments that significantly impacted the dynamic of EU integration process of the Western Balkans. While the first half of the year seemed to be adding to the enlargement momentum, the second half has showcased many of the still unresolved problems the region is facing.

Here is a retrospect of the most important events of the year.

Publishing of the Enlargement Strategy

European Commission’s “A credible enlargement perspective for and enhanced EU engagement with the Western Balkans” has been released on 6 February and presented in Strasbourg on the following day. It has been interpreted as a fresh interest of the EU in the region, partly because of the increased Russian, Turkish and Chinese influence.

The document identified four areas the region has to continue working on: rule of law and fundamental rights, strengthening the economy, applying EU’s rules and standards and reconciliation, good neighbourly relations and regional cooperation.

The part of the Strategy that received most attention was the assessment that the frontrunner countries – Montenegro and Serbia – could potentially be ready for membership by the year 2025, even though this perspective was estimated to be extremely ambitious. The rest of the year seems to have shown why.

Reports on the progress achieved by the six Western Balkan countries, as well as Turkey, were released on 17 April. This was the first time that the reports are being released in spring, with the publishing of the previous round in November 2016. The 2018 reports thus evaluated the whole period since, including the full calendar year of 2017.

The “biggest winners” were Macedonia and Albania, for which the Commission recommended opening of accession negotiations. Each country was encouraged to prioritise reforms in the fundamental areas of the rule of law, human rights, democratic institutions and public administration reform, as well as on economic development and competitiveness, all areas where “structural shortcomings still persist”. Apart from the adoption of EU acquis, a convincing track record in implementation also remained crucial.

EU-Western Balkans Summit in Sofia, the first of its kind since the 2003 Thessaloniki Summit, took place on 17 May. It was organised on the initiative of the then EU-Presiding country, Bulgaria, and gathered Western Balkans’ heads of state and government, the highest EU officials and leaders of the biggest EU member states.

The Summit concluded with a Declaration that reaffirmed European perspective of the Western Balkans. However, enlargement itself was not on the agenda of the Summit, and while there were strong words of encouragement by several EU officials, German Chancellor Angela Merkel and French President Emmanuel Macron expressed caution and reservation

Reaching of the Prespa Agreement

The agreement signed by Foreign Ministers of Macedonia and Greece, Nikola Dimitrov and Nikos Kotzias at a ceremony attended by the countries’ Prime Ministers Zoran Zaev and Alexis Tsipras on 17 June is still regarded as the highlight of the year. It put an end to a decade-long dispute on the issue of Macedonia’s name, ensuring that the country will be officially known as the Republic of North Macedonia in the future, while its southern neigbour promised to lift the arguably biggest hurdle on its Euro-Atlantic path.

The ratification of the deal has seen challenges in both countries. On 30 September, more than 90% of Macedonia’s citizens supported the Agreement in a consultative referendum, but the turnout was low. The process is currently ongoing in both Parliaments.

Despite the success of the Prespa Agreement and the previously expressed recommendations of the European Commission, the European Council decided in June not to open accession negotiations with Macedonia and Albania in 2018, but to postpone them for 2019. The move has been criticised by some for not recognising the reform efforts undertaken by the two countries.

Macedonia and Albania have since begun screening processes and formed negotiating teams, while the former country has also been invited to join NATO, a process which is expected to last much shorter than the European integration.

The fifth annual Berlin Process Summit – following the ones in Berlin, Vienna, Paris and Trieste – took place in the capital of the United Kingdom on 9 and 10 July. The somewhat paradoxical situation of the country leaving the EU promoting its enlargement did not go unnoticed, and the event was marked by the resignation of Foreign Minister Boris Johnson over Brexit.

The next Berlin Process Summit will take place in the Polish city of Poznan in the summer of 2019.

Kosovo’s visa liberalisation: a step forward, and then delay

After the European Commission confirmed that Kosovo had fulfilled all required benchmarks for visa liberalisaiton on 18 July this year, it seemed that the process launched in 2012 will soon come to an end. Indeed, on 13 September, the European Parliament approved the proposal to amend the regulation listing countries and territories whose nationals are required to be in possession of visa when crossing the external border with 420 to 186 votes.

However, the ball has since remained in the court of the Council of the European Union, that is to interior ministers of each member state. Despite repeatedly expressed expectations of Kosovo’s officials, the decision has not been made so far, and there are no signs the situation will change in the near future, with the newest comments of EU Commissioner for Enlargement Negotiations Johannes Hahn announcing the possible finalisation of the process only in 2020.

General elections in Bosnia and Herzegovina

On 7 October, several month-long election campaign in Bosnia and Herzegovina came to an end with the election of Milorad Dodik, Šefik Džaferović and Željko Komšić as the members of the country’s three-member presidency, and the relative wins for Dodik’ SNSD party both in the entity of Republika Srpska and on the national level, Bosniak’s SDA and Croat’s HDZ-BiH.

Apart from the “regular irregularities”, the process was made even more controversial by two additional developments – the popular protests over the apparent murder of the 21-year old student in Banja Luka in March and the subsequent cover-up attempts by the police, and the election of Komšić as a Croat memeber of the Presidency by the majority of Bosniak votes, a fact that spurred a series of complaints over the electoral system by Croatia.

There are few signs that the ethnic divisions in the country are decreasing, and the governments are still in the process of formation.

Following the release of the Commission’s Reports, European Parliament adopted its more politically toned Resolutions on the progress of the Western Balkan countries at the end of November. While the countries’ Rapporteurs mostly focused on the positive developments in their respective countries, the debate also showcased a more serious criticism of the state of democracy in rule of law in some parts of the region.

Resolution on Bosnia and Herzegovina has not been adopted due to the country’s failure to establish the Joint Stabilization and Association Parliamentary Committee.

During the year 2018, EU has opened two additional negotiating chapters with Montenegro, bringing the country’s total to 32, of which three are provisionally closed. Chapter 17 – Economic and monetary policy was opened in June, while Chapter 27 – Environment, was opened in December. The latter is considered to be one of the most complicated and expensive chapters due to the required implementation of multiple reforms. Chapter 8 – Competition, remains unopened.

On the other hand, Serbia has opened four new chapters: Chapter 13 – Fisheries and Chapter 33 – Financial and budgetary provisions in June and Chapter 17 – Economic and monetary policy and Chapter 18 – Statistics in December. Even though its total now stands at 16 chapters (two provisionally closed), the failure of Serbia to open more than two chapters at once for the first time since the start of the negotiations has been considered disappointing, especially given the fact that the country has announced that as many as seven chapters are ready for opening.

The first half of 2018 was not without tensions, especially during the murder of North Kosovo Serbian politician Oliver Ivanović in January and the several-hour arrest of Serbian Head of Office for Kosovo and Metohija Marko Đurić in March. Nevertheless, it seemed that the legally binding agreement on the comprehensive normalisation of relations is on the horizon.

Since the summer, however, the “hot topic” of the region has become “border correction” or “land swap”, proposed by the two Presidents Hashim Thaçi and Aleksandar Vučić. With some actors seemingly supporting the idea – EU and United States – and the others opposing it – Germany, majority of the population in both Serbia and Kosovo – the future of the proposal is unknown.

In the meantime, the relations have further deteriorated with sporadic tensions, Serbia’s diplomatic efforts aimed at revoking the recognition of Kosovo’s independence by as many countries as possible, and Kosovo’s imposition of 100% tariffs on goods from Serbia and the formation of Kosovo Armed Forces (assessed as “untimely” by NATO). Whether the year 2019 will lead to a breakthrough in this area remains to be seen.

What to expect from the Kosovo-Serbia dialogue in 2021