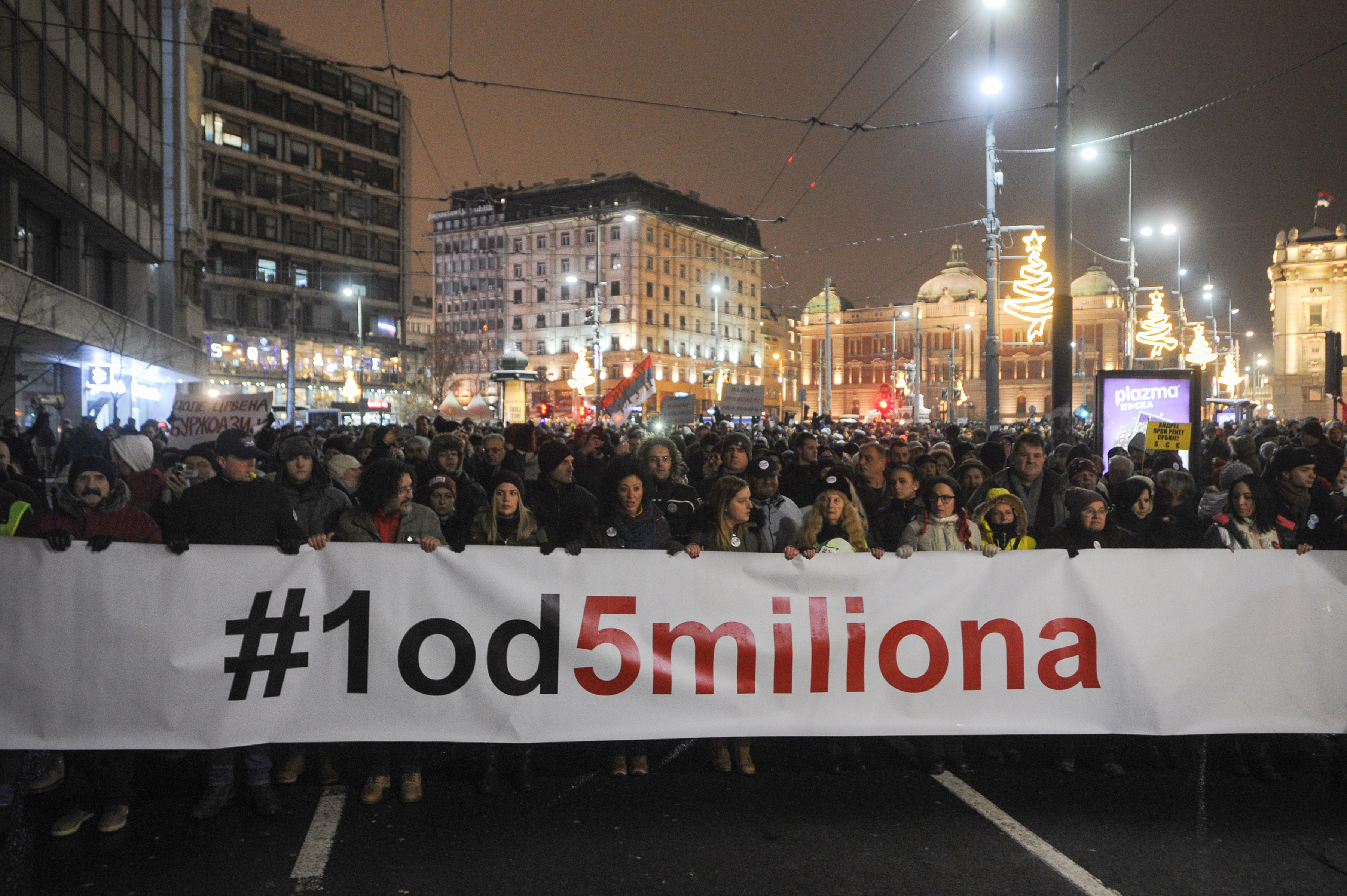 BELGRADE – Sixth weekly protest walk, titled “Stop to the bloodied shirts” and “One of the five million” took place on Saturday evening in Serbia’s capital, as well as the city of Kragujevac.

Thousands of people once again took to the streets to express their dissatisfaction with the rule of President Aleksandar Vučić and his Serbian Progressive Party.

The first round of protests took place on 8 December and was initiated by the beating of opposition politician Borko Stefanović in the city of Kruševac. Photos of his bloodied shirt surfaced on the social networks in November, inspiring the title of the protests. The other title came as a response to President Vučić’s statement that he would not fulfill any demand “even if there were five million people on the streets”.

A day earlier, similar protest took place in the city of Niš, while the one in Novi Sad, Serbia’s second largest city, is planned for the next Friday. A series of protests in smaller places have also been held.

Demands include bringing those ordering the attack on Stefanović, as well as journalist Milan Jovanović, whose house has been burned to the ground, to justice. The resignation of the Minister of Interior Nebojša Stefanović, who has spend several public appearances counting the protesters and emphasising their alleged low number, is also demanded.

While passing by the building of Radio-Television of Serbia (RTS), country’s public broadcaster, the protesters expressed their dissatisfaction the loudest. One of additional demands includes opening of the national media space, almost entirely occupied by the ruling parties, for the opposition members, beginning with a five minute slot in a 35-minute long nation-wide watched daily news segment of RTS.

The protests are supported by the Alliance for Serbia, the country’s largest coalition of opposition parties and movements, and some other smaller parties. They have thus far gathered a wide spectrum of participants, with both right- and left-wing signs being present.

The protesters on Saturday were addressed by one of the organizers, actor Branislav Trifunović, and Rada Trajković, president of the European Movement of Serbs from Kosovo and Metohija and former representative in the Kosovo Assembly.

“We ask for the Serbs not to be afraid of other Serbs. And since Vučić came to power, we are afraid of the Serbs”, said Trajković, referring to the alleged close ties between Serbian Progressive Party and criminal organisations from Northern Kosovo.

On Friday, the organizers wrote an open letter to President Vučić, accusing him of abandoning the Serbs from Kosovo and the fact that the Pristina authorities have not held their end of the bargain in negotiations. They demanded that he presents his plan for solving the issue of Kosovo to the public.

In his statement on the following day, Vučić described the letter as “so stupid, that I am at a loss for words”. He in turn accused opposition leaders for undermining Serbia’s position when it comes to Kosovo while they were in power.

On Wednesday, 16 January, another protest will take place in Belgrade, commemorating the murder of Oliver Ivanović, a Serbian politician in Kosovo, which took place one year earlier.

One of the demands of the organizers is for the names of both murderers and those ordering the murder to be revealed. The protesters believe that the murder, which took place in Kosovska Mitrovica, was carried out by Serbs with mafia connections.

“They thought that the death Oliver [Ivanović] should promote the inability of co-existence of Serbs and Albanians, that demarcation is the future”, stated Trajković during her address to the protesters.

Bieber: I expect some opposition MPs in Greece to vote for Prespa Agreement