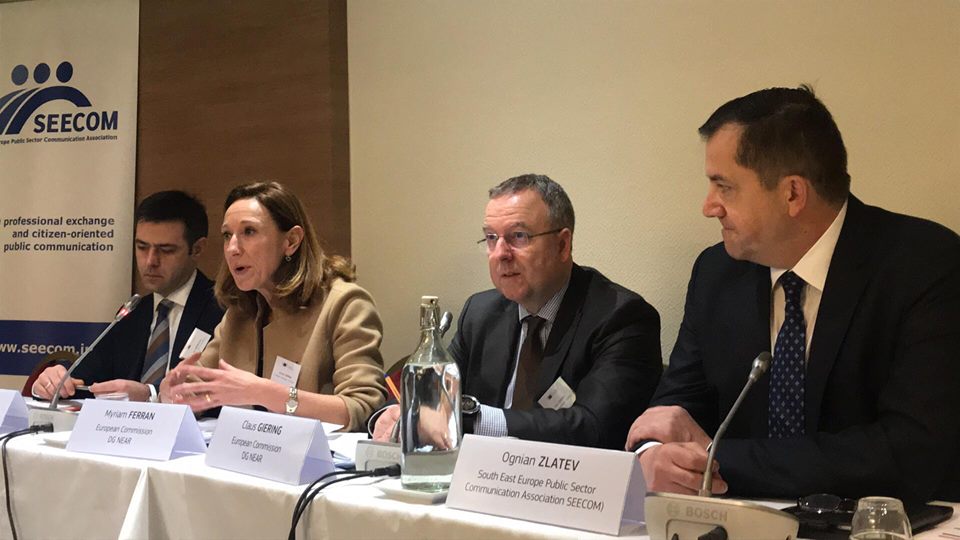 BRUSSELS –  A two-part round table discussion on the public support for the EU accession of the Western Balkans, organised by the Directorate-General for Neighbourhood and Enlargement Negotiations (DG NEAR), together with South East Europe Public Sector Communication Association (SEECOM) and European Fund for the Balkans, took place today in the Belgian capital.

The discussion, titled “Boosting public support for the European perspective of the Western Balkans”, gathered both European and national officials, journalists and civil society representatives, who shared their thoughts on this not very often discussed topic. It consisted of two parts, the first covering the state of public support in the countries of the region, and the second focusing on EU member states.

On behalf of the organisers, the participants were first addressed by Myriam Ferran, Director for Strategy and Turkey at the DG NEAR, as well as Ognian Zlatev, President of SEECOM and Igor Bandović, Senior Programme Manager at the European Fund for the Balkans.

“The public both in EU and WB is not knowledgeable enough about what is happening on the ground, and if the reforms are not recognized, they are in vain”, stressed Ferran. The lack of knowledge brings also leads to fear of unknown, she added.

According to her, what makes the difference between propaganda and effective communication is that communication needs to be based on facts. “We need success storues and a joint effort”, she emphasised, referring to the revamping of the mostly image the Western Balkans still has in the EU.

However, communication will never compensate for the lack of political will. “You cannot expect us to reach out to 500 million people in the EU and 20 million in the region – but we are here to support”, Ferran said. “It all boils down to reforms”, she concluded.

Zlatev began his speech with the reflection on the support for enlargement in Croatia, Romania and Bulgaria, which, according to him, is on a high level. This is understandible, due to the historic ties these countries have with the region, he explained.

The situation is not the same in other parts of the continent, though. “There are a lot of prejudices, they see Balkans as something dark and messy. This is going to be exploited during the European elections. It is easy to scare your audiences. We need to bust all kinds of myths, negative opinion and stigmatisation”, he stressed.

Bandović pointed at the numerous projects European Fund for the Balkans is organising in order to contribute to the improvement of the region’s image. Among them he listed the portal Balkanoscope, Civil Society Forum of the Western Balkan Series, as well as Fellowship programme for Government officials.

“We must directly communicate with the citizens – a lot of governments are sending mixed signals about what the EU integration is about and why are we joining”, he said, concluding that the EU is complex, but that we need to learn how to send simple, clean and clear messages.

Support for EU in the region: Is it just a number?

One of the speakers of the first part of the discussion, titled “Inspiring greater Euro-enthusiasm in the Balkans”, was Nikola Burazer, Executive Editor of the portal European Western Balkans. He emphasised the duration of the accession process, comparing it to the so called “Big Bang” Enlargement of Central and Eastern European countries.

It took fifteen years, from the fall of the Berlin wall in 1989 to 2004, for these countries to become EU members, Burazer reminded. On the other hand, it has already been sixteen years since the EU-Western Balkans Thessaloniki Summit, at which European perspective of the region was confirmed.

“Many people believe it [the accession] will never happen”, said Burazer.

According to him, the relatively high percentage of people who nominally support EU membership in the region does not matter that much. “What matters more is voting for the pro-EU parties, support for the reforms and willingness to sacrifice something in order to become a member, as Macedonia did in its compromise with Greece”, he explained.

What is also diminishing the support for EU in the region is the narrative that the EU is close to collapsing, as well as the Union’s support for increasingly autocratic regimes in exchange for short-term gains – a process that has become widely known as “stabilocracy”, Burazer added.

“The fact is that the accession process has slowed down and the rule of law has deteriorated. But this is mostly not communicated in the region by the EU, so the citizens remain unaware”, he concluded.

Reminding the audience of the generally high support the EU has in Macedonia, Zoran Nechev, Head of the Center for EU integration at the Institute for Democracy Societas
Civilis explained that it is based on a positive expectations of the future standard of living.

“EU can enhance the enthusiasm in the region if it directly supports the initiatives that are connected to this area”, he stated, adding that people are mostly unaware that, out of 19 air quality measuring devices in Skopje, which is one of the most polluted cities in the region, 17 were bought by the EU.

“People cannot regnize the EU-funded projects even in their own municipalities”, Nechev said.

He also emphasised that the EU can gain even more support if it increases the certainty of the accession process.

Tamara Puhovski, CEO and founder of the ProPuh Social Innovations, said that there are three forms of communication: information, education and advocacy. While the second means the promotion of EU’s common values, the third requires clear and firm position of the advocating subject.

Other speakers of the event tackled various subjects, highlighting the harmfulness of “us” and “them” divide when it comes to the EU-Western Balkans relations and commenting on the apparent retreat of the European values in the EU’s approach to the region.

“All candidate countries need a sense of belonging, a sense that Europe is a house of all of us”, one of the speakers said.

It was emphasised that the EU is not as credible as it used to be and that the media have given up on their public interest role of explaining and exploring the EU integration process, letting the politicians to set the agenda.

If the EU abandons progressive, pro-democratic politicians and activists in the region, which are the bulk of its supporters, it risks a rising authoritarianism, such as in Tureky, the panel concluded.