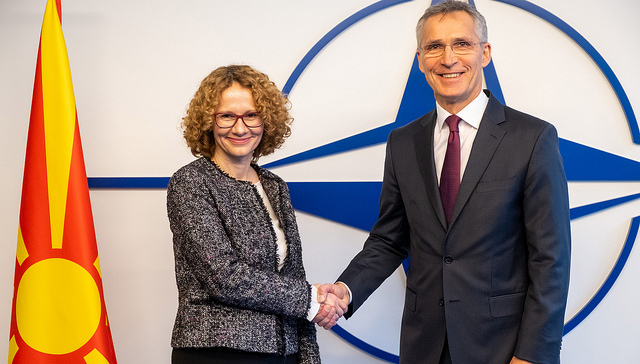 Šekerinska has expressed her gratitude to Stoltenberg for his sincere support and personal pleading in the process of North Macedonia’s accession process into NATO.

“It’s an honor and a privilege for me and my country to be present here, for the first time and to attend NATO’s ministerial meeting. It is proof that the political courage pays off, that the changes are possible even in the Balkans, even in times such as these. It is also proof that there are no problems that aren’t frozen problems, only frozen solutions. I feel privileged to sit beside you and the remaining colleagues ministers of defense” said Šekerinska.

She expressed her conviction that we can make our region better and more stable and that we can show that NATO’s open door policy is not just empty words but real acts and real pledge.

NATO’s Secretary General Stoltenberg stressed that this is a big moment.

“This is a big day and I look forward to the day when you will become a fully-fledged member as soon as the ratification process of the accession protocol by all 29 allies is over,” said Stoltenberg.

After the meeting with the Secretary-General, Minister Šekerisnka will take part in the meeting of NATO’s ministers of defense. During the meeting, the Minister will be seated between NATO’s Secretary, Stoltenberg and US Secretary of Defense.