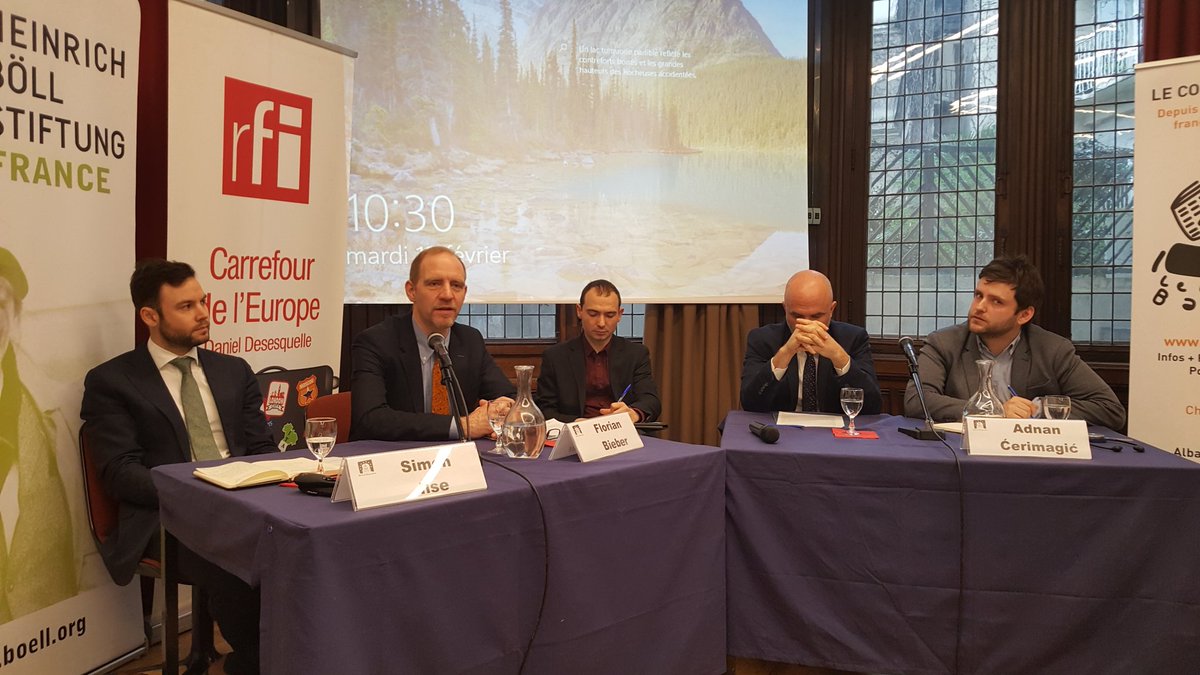 PARIS – Celebrating its 20th birthday, French newspaper Le Courrier des Balkans organized a conference in Paris titled “EU-Western Balkans: 20 years of staring at each other”.  The conference was organized in partnership with Heinrich Böll Foundation in Paris, the European Fund for the Balkans and the Maison de l’Europe in Paris.

During the course of two days, there were four round table discussions, in which the speakers tried to assess the record of the past two decades of the EU integration of the Western Balkans. The opening remarks were delivered by Catherine Lalumière from House of Europe in Paris, Igor Bandović from European Fund for the Balkans, Jens Althoff from Heinrich Böll Foundation and Laurent Geslin from Le Courrier des Balkans.

The first round table tackled topic of relations and misunderstandings between the region and the European Union, as well as the current state of the rule of law and justice. Panelists Florian Bieber from the University of Graz, Srđan Cvijić of the Open Society European Policy Institute, Simon Ilse from the Böll Foundation and Adnan Ćerimagić from the European Stability Initiative agreed that there are positive developments in the region like for example implementation of the Prespa Agreement, but that there are also negative movements.

“The picture is bleak. Countries are less plural, there is no talk about the past, they have less freedom,” said Bieber and added that, for example, the majority of Serbian citizens do not believe that they will ever join the EU. In his opinion, the process has lost its way. “You will not see protesters in the Western Balkans carrying the EU flag, because the citizens see the EU being on the side of those who are governing them. That is the problem and EU needs to reinvent itself”, concluded the Bieber.

A general conclusion was that the responsibility for the current state of affairs is on the political leaders of the Western Balkans who do not show in practice their will to join the EU, and on the EU itself which, due to the internal problems, has slowed the accession process of the candidate countries.

Milica Popović from Sciences-Po Paris pointed out that, when people from Serbia, Croatia, and Slovenia were asked about the main value that they miss from the Yugoslav period, the answer was solidarity. “This is also one of the core European values”, said Popović.

“Serbian President Aleksandar Vučić, who is ruling with an iron fist since 2014, has the support of Russia, USA, EU, and China. This is a tremendous success for him as a politician“, says Ivica Popović and adds that he succeeded in this through making Serbia a country with the cheap labor force.

The next panel tackled the issue of the geopolitics in the Western Balkans. Panelist were Nikola Burazer, Executive Editor of the portal European Western Balkans, Tena Prelec, Researcher at the London School of Economics, Marion Kraske from Böll Foundation and Jean-Arnault Dérens from Le Courrier des Balkans.

Speaking about possible border change between Serbia and Kosovo, Nikola Burazer said that this solution could lead only to long-term challenges. “We can be open to this solution, but only if some conditions are met,” Burazer said.

The media often state that the Balkans is the new hub of the Cold War, which is far from reality, stressed Tena Prelec, adding that this narrative leads to “new followers” on social networks. “Russia doesn’t want to break up the Bosnia and Herzegovina, but media needs drama which is reinforced by local political actors”, concludes Prelec.

Marion Kraske pointed out that, when we talk about external actors and their negative impact on BiH, Russia and Turkey pop out, but we forget about the nearest – Croatia.

Final roundtable gathered Myriam Ferran from the DG NEAR, Srđan Majstorović from BiEPAG, Jacques Maire, member of the Hauts de Seine, Tobias Heider from the Greens in the EU Parliament and Jean-Arnault Dérens from Le Courrier des Balkans. The panelist tackled the subject of the future of EU enlargement.

“There is no reason to leave the enlargement aside just for the sake of EU’s reform. The two subjects are a parallel process – there is a consensus in the EU Parliament that the Balkans need to be part of European Union”, recalled Myriam Ferran, but also pointed out there are numerous reforms that need to be implemented.

On the other hand, Jacques Maire pointed out that the reforms of the European Union are still necessary and that the EU cannot accommodate six new states until this happens.

“The enlargement sometimes looks like an old married couple, without passion and where one takes everything somebody else says for granted”, pointed out Srđan Majstorović and adds that Western Balkans Six are smaller and less populated than Romania and that this is not a big enlargement. “We must admit that we are not free from any criticism as a candidate”, he concluded.

Sofia and Skopje – Is there a light at the end of the tunnel?

[EWB Interview] Hani: RYCO needs the governments’ support for the work that still lies ahead