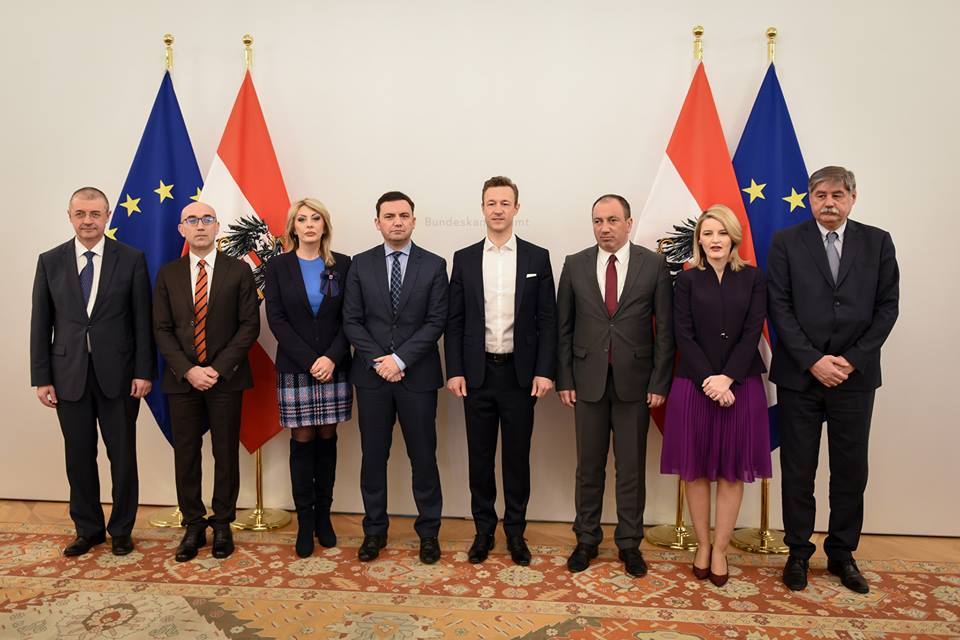 VIENNA – Austrian Federal Chancellery for the EU, Arts, Culture and Media, represented by the Federal Minister Gernot Blümel, hosted today a conference titled “The Future of EU – A Look from the Western Balkans”, which gathered region’s Ministers for European affairs. The event focused on the near-future challenges of the Union and the role Western Balkans could play in it.

Deputy Prime Minister of the Republic of North Macedonia Bujar Osmani thanked the host for providing an opportunity for the Ministers to discuss their ideas, visions and expectations from the EU. He also expressed gratitude to Austria for its support of the European perspective of the region, especially during its Presidency of the Council in the second half of 2018.

“I hope that our success story will represent a motivation for other countries in the region, and here I especially have Kosovo and Serbia in mind, to expand their political horizons”, said Osmani, referring to the successful implementation of the Prespa Agreement his country reached with Greece. In his view, Belgrade-Pristina dispute is the most difficult, most complex and, at this moment, most important priority of the region.

Minister of European Integration of Serbia Jadranka Joksimović stated that she had made the position of her country clear – it is hard to expect that the dialogue will continue, and much less that the solution will be found, until Pristina revokes the tariffs on Serbian goods and starts fulfilling its obligations arising from the already achieved agreements.

She highlighted the importance of Austrian strategic presence in Serbia and in the region, as well as its sincere support to the enlargement policy, especially now, with the European elections being ever closer.

Joksimović’s colleague from Kosovo, Minister Durata Hoxha, also reflected on the negotiation process. The Republic of Kosovo needs immediate support from the EU to make further progress in its long-term negotiations with Serbia, for a more peaceful, prosperous and democratic Balkans, she said, adding that Kosovo citizens are the most pro-EU in Europe, while being the only country with a visa regime. She thus considers visa liberalization as a key issue for Kosovo.

It is clear that the EU has its own accession rules and the Western Balkan countries have still a lot of work to do with crucial reforms affecting the most important sectors. However, the EU should be able to assess achievements and make decisions accordingly, avoiding uncertainty in the region, stressed Hoxha.

Minister of Foreign Affairs of Bosnia and Herzegovina Igor Crndak expressed hope that the October election results in his countries will be fully implemented soon, as well as that BiH will be granted a candidate status this year.

He called the EU to be more present in the EU and in the region, so that the citizens could get an even clearer picture of the membership benefits.