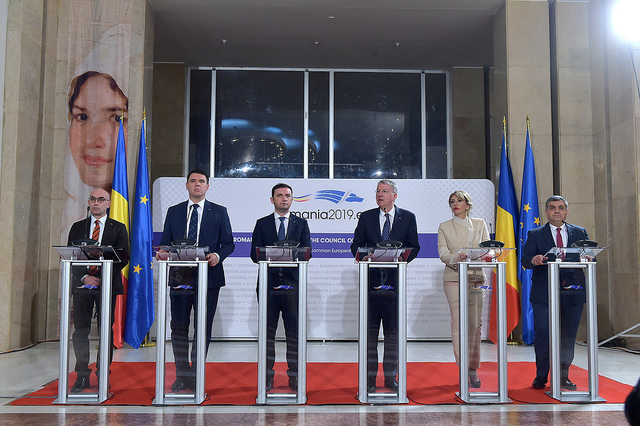 BUCHAREST – The informal meeting of ministers and state secretaries for European affairs (informal meeting of the General Affairs Council) has started in Bucharest. The event is taking place two days and it is held in Palace of the National Bank of Romania (NBR).

The representatives of the EU candidate countries (Albania, the Republic of North Macedonia, Montenegro, Serbia and Turkey) were welcomed by Romanian Minister Delegate for European Affairs, George Ciambia.

As he pointed out the enlargemnt is one the priorities for Romanian Presidancy of EU, adding that from Romanian perspective enlargement is the future of Europe.

Ciambia underlined that Rumunia during its Presidency has to take care of every candidate country on its European path.

Serbian Minister of European Integration Jadranka Joksimović said that Serbia is expecting intergovenrmental conference by the end of June as well as the opening of at least two chapters.

“Serbia is facing with many challenges on its path to EU, especially with the ones related to regional stability”, Joksimović said, underling the chapter 35 dealing with Belgrade – Pristina dialogue and Brussels Agreement signed six years ago.

As Minister Joskimović pointed out Serbia has completed all its obligations from the Brussels Agreement, adding that Pristina has endorsed new platform for dialogue just couple days ago, which undermines the importance of Brussels agreemenet.

“We have put a lot of effort and political will in order to achieve a comprehensive solution”, concluded Joskimović, emphasizing that Serbia will continue with the constructive behavior in the region.

Today’s informal meeting of the General Affairs Council will enjoy the participation of ministers and state secretaries for European affairs from the EU Member States, Frans Timmermans, the European Commission First Vice-President for Better Regulation, Interinstitutional Relations, the Rule of Law and the Charter of Fundamental Rights, and several representatives of the General Secretariat of the Council.

The meeting will include a debate on the Multiannual Financial Framework 2021-2027, a topical EU file and also a flagship file for the Romanian Presidency of the Council of the European Union. The second working session will focus on the future of Europe, emphasising the key priorities that should guide the activity of the Union for the next five years, in preparation of the new EU Strategic Agenda.

The Office of the PM of Kosovo: Thaçi signed a secret agreement and violated the Constitution; dismissal required