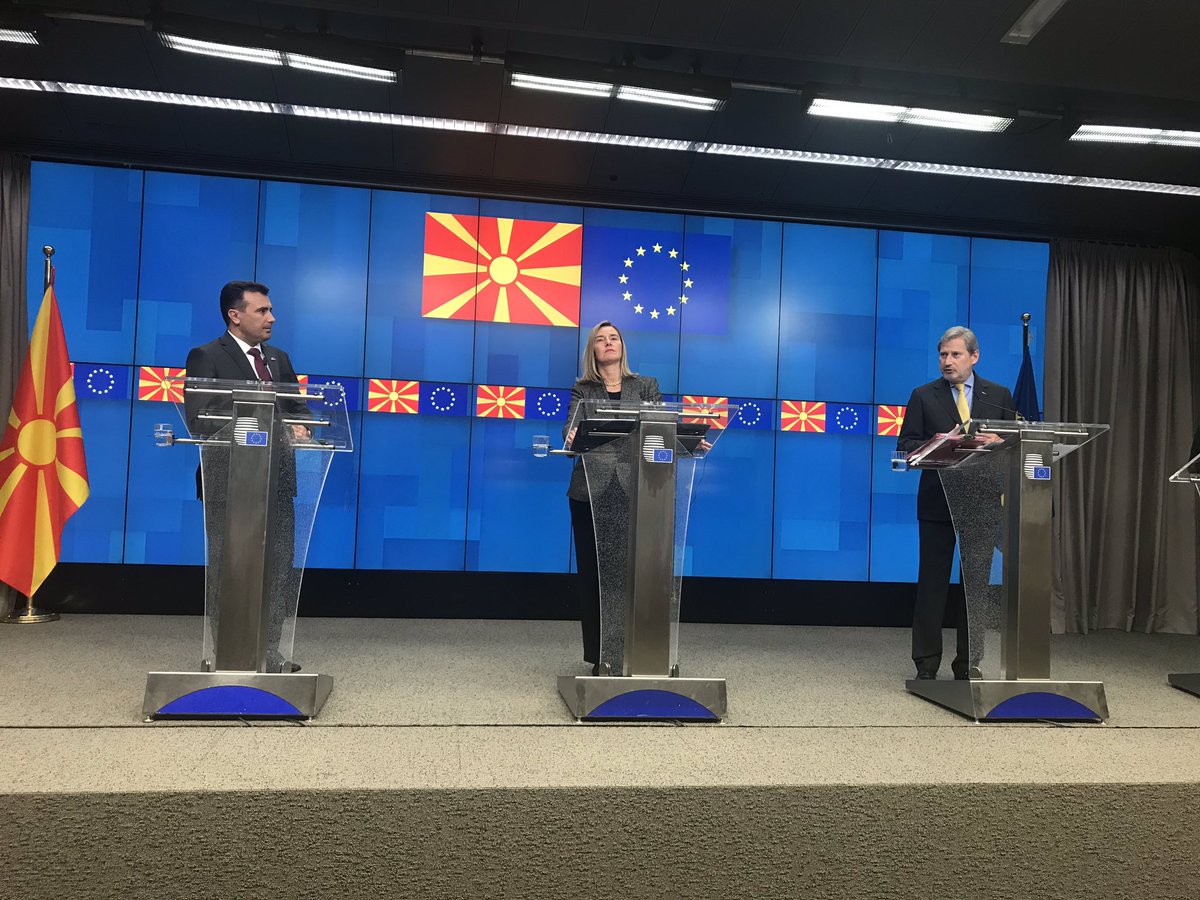 BRUSSELS – The 15th meeting of the Stabilisation and Association Council between the Republic of North Macedonia and the European Union (SA Council) took place on 19 March 2019.

The SA Council recalled that the Stabilisation and Association Agreement (SAA) remains at the core of the relationship between the EU and the Republic of North Macedonia until the country’s accession to the EU. The SA Council took note of the country’s primary objective to open accession negotiations and acknowledged the government’s strong commitment to this purpose. The SA Council welcomed that the European Council has set out the path towards opening accession negotiations in June 2019 based on continued progress and tangible results, maintaining and deepening the current reform momentum. The SA Council took note of the intention of the Commission and government to begin the necessary preparatory work.

On good neighbourly relations, the SA Council strongly welcomed and supported the agreement between Athens and Skopje on the resolution of the name issue and the establishment of a strategic partnership. This is a historic step, which sets an example for the Western Balkans region and beyond. This agreement, together with the Treaty on Friendship, Good Neighbourliness and Cooperation between Bulgaria and the Republic of North Macedonia, sets a strong example for others in the region and beyond to strengthen good neighbourly relations.

The SA Council underlined the importance of continued implementation of these agreements in good faith and took note of the governments’ commitment to this end. The SA Council reviewed the key developments over the previous period relating to the fulfilment of the political criteria, as well as the state of play concerning the economic criteria and financial cooperation.

Concerning the political criteria, the SA Council welcomed the significant steps taken by the government to advance EU-related reforms, in a transparent and inclusive manner, as well as the positive changes in the general atmosphere in the country. Acknowledging the achievements so far, the SA Council encouraged the Republic of North Macedonia to continue its efforts over the coming months to follow up on legislative measures and to strengthen the implementation of reforms, in particular in the areas set out by the Council in June 2018, such as the judiciary, the fight against corruption and organised crime and reform of the intelligence services and public administration.

The SA Council encouraged the government, the opposition parties, civil society and other stakeholders to continue to cooperate with one another. The SA Council urges all parliamentary parties to put their divisions aside and work jointly on delivering on the reform agenda and on the common strategic goal of EU integration, for the benefit of all citizens.

Concerning rule of law, the SA Council acknowledged that legislative changes have been adopted to address the “Urgent Reform Priorities”, the recommendations of the Venice Commission and those of the Senior Experts’ Group on systemic Rule of Law issues, which aimed at having a positive impact on the independence of the judiciary. The SA Council welcomed continued progress made in the investigations conducted by the Special Prosecutors’ Office to establish legal accountability for the wiretaps. It stressed the importance of a sustainable solution for the future status of the Special Prosecutor’s Office, which is in line with the Judicial Reform Strategy.

The SA Council recalled the importance of accountability for the attack on Parliament on 27 April 2017. The SA Council commended the progress made in amending the legal framework for prevention of corruption and conflicts of interest. It welcomed the immediate steps taken to implement the new law and that the new State Commission for Prevention of Corruption was appointed effectively in an inclusive and transparent manner. It encouraged the Republic of North Macedonia to further step up proactive investigations, prosecutions and final convictions in corruption and organised crime cases, including at high level.

On public administration reform, the SA Council took note of the ongoing implementation of the Public Administration Reform Strategy and the Public Financial Management Reform Programme. It acknowledged that concrete efforts have been made towards increasing transparency and accountability and improving consultations in policy-making. The SA Council reiterated that any recruitment, appointment or dismissal must respect the principles of a depoliticised and merit-based public administration, of transparency and equitable representation, in line with the spirit and the letter of the relevant legislation for public service positions.

Regarding relations between the communities, the SA Council assessed that the situation continues to be calm overall, while recalling that this requires continuous engagement. The government underlined the concept of “one society for all” and the steps taken to build greater trust among communities. The SA Council reiterated that the Ohrid Framework Agreement (OFA) continues to be an essential element for democracy and stability in the country, as part of its constitutional order.

It also commended on the Republic of North Macedonia for its continuous efforts and constructive cooperation in addressing the issue of irregular migration and encouraged the country to sustain its engagement in this area. In addition, it positively noted the country’s increased alignment with the EU Common Foreign and Security Policy and encouraged the Republic of North Macedonia to further improve its alignment.

The SA Council pointed out the importance of the national authorities continued implementation of the European Court of Auditors’ recommendations. In particular, national authorities should increase their efforts to spread best practice in implementing EU pre-accession assistance across the whole of the public administration. It also noted the importance of sound financial management and the need for full compliance with the sectoral approach criteria.

The recent passage to the second stage of the Stabilisation and Association Agreement was also welcomed.

The meeting was chaired by Prime Minister Zoran Zaev who led the delegation of the Republic of North Macedonia. Deputy Prime Ministers Bujar Osmani and Radmila Šekerinska, as well as Minister of Foreign Affairs, Nikola Dimitrov, also took part at the SA Council meeting. The High Representative of the European Union for Foreign Affairs and Security Policy/Vice President of the Commission, Federica Mogherini, led the EU delegation while Commissioner for European Neighbourhood Policy and Enlargement Negotiations Johannes Hahn represented the European Commission.

Tensions in the Montenegrin parliamentary majority over prosecutorial laws