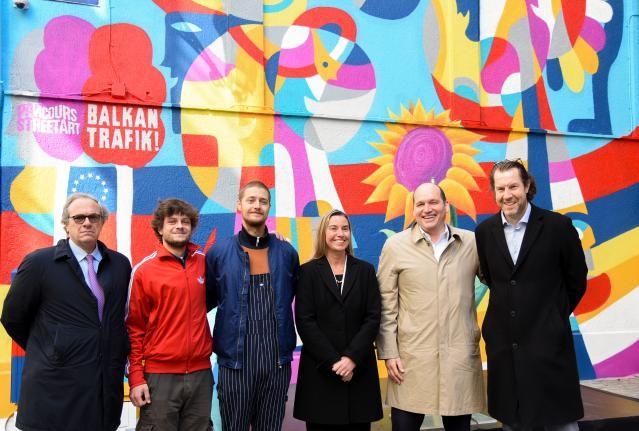 BRUSSELS – High Representative Federica Mogherini presented a new mural in Brussels, painted by Rikardo Druškić, one of the most acclaimed young artists from Bosnia and Herzegovina.

“I believe that this remarkable piece of art, it brings the Balkans to where they belong, which is at the heart of Europe. It is now for us, both at the European Union level with our Member States and with the authorities of the Balkan countries, to bring all the Balkans inside of the European Union. This is the next step. I am convinced that today, compared to five years ago – we started with our mandate four and a half years ago – each and every one of the six partners that we have in the Western Balkans are closer to the European Union”, said Mogherini.

The mural is dedicated to the people from the Western Balkans and the EU and the deep cultural ties between them. Its title “It is only with the heart that one can see well” invites us to “look at each other with open hearts and without prejudice”.

The creation of the mural was supported by the EU, the Balkan Trafik Festival and the City of Brussels. It will become part of the popular Brussels’ Street Art Parcours.

“The EU and the Western Balkans after the Berlin Process”