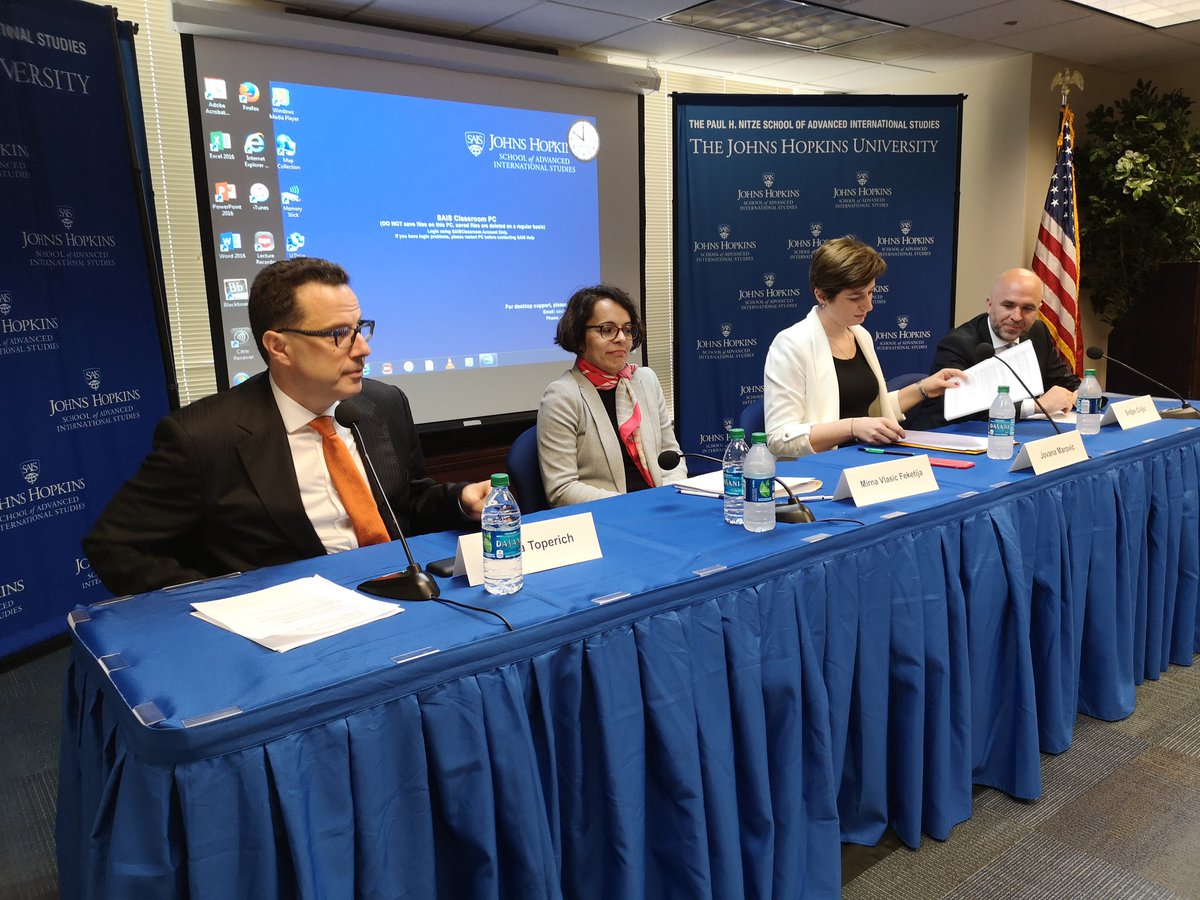 WASHINGTON – What will be the role of the EU’s transformative power in the region in the coming years and how will Western Balkans deal with security challenges and past conflicts are some of the questions brought out at the conference “Western Balkans: Managing Challenges Ahead” organized by Balkans in Europe Policy Advisory Group (BiEPAG), Johns Hopkins School of Advanced International Studies (SAIS) and European Fund for the Balkans.

There were 3 peace problems in the Balkans, and today after the name resolution of Macedonia there are only two left:  normalization of relations between Kosovo and Serbia and fixing the dysfunctional governance in Bosnia and Herzegovina, said Daniel Serwer from Johns Hopkins.

He thinks that the moment is right for Kosovo and Serbia issue to be resolved. And once it is resolved, the problem in BiH will be much more solvable and different than now. Additionally, he is the proponent of pragmatic diplomacy.

Bieber: The main problem of the Balkans are authoritarian governments

On the other hand, BiEPAG coordinator and Professor at the University of Graz Florian Bieber reckons that the main problem of the Balkans are authoritarian governments which are not fully committed towards liberal democratic values of the EU and US, and which are followed by mainstream media loyal to the presidents, such as the case in Serbia. They create an atmosphere where everyone is against Serbia, which is also the problem.

“You do not have additional mileage to autocratic behaviour. This creates disappointment and disillusion among the citizens, not because they are against the EU, but because they see the West as someone who tolerates autocracy. These are the countries who are supposed to be part of the same EU club. Saying that these countries are not in war and that is enough, is no good for the future of the region”, he underlines.

As for the Prespa Agreement, it was successful because it was locally driven.

“It was driven by the will of both governments. Also, there would be no agreement between the countries if there was no NATO and EU option for North Macedonia”, states Bieber.

Commenting on the yesterday Berlin meeting he says the problem is that the European Commission has lost its authority and creditably over the dialogue between Serbia and Kosovo. He does not have the blueprint to the solution, but he is sure it has to have confidence-building measures between the countries so they can have normal relations.

Senior Programme Manager of the European Fund for the Balkans Igor Bandović also mentions the problems existing in Serbia media.

Cvijić: Serbia needs to make peace with its neighbours

What is also worrying is that there is also a scarcity of information about what is going on in Serbia in international media as well, argues Senior Policy Analyst at the Open Society European Policy Institute in Brussels Srđan Cvijić.

“There is a lack of quality journalism when it comes to international news and foreign media outlets, such as Sputnik, fill this void”, Cvijić says and adds that the Government is trying to portray the opposition movement as violent which is absolutely not true and it is frustrating that people abroad buy this Government propaganda.

He said that the Government in Serbia is the one talking about the Russian influence and war criminals and that opposition is not the problem. On the other hand, there are doses and doses of anti-Western and EU, undemocratic stories in all Government mainstream media.

“Serbia needs to make peace with its neighbours and this is the precondition of the stabilization of the whole region”, concludes Cvijić.

Marović: There is no rule of law in Montenegro

The situation is not promising in Montenegro as well, even though it is seen as a frontrunner among the Balkans’ countries towards the EU accession process.

Executive Director of Politikon Network Jovana Marović describes the country as a kingdom and private state. Furthermore, there are political elites who are 30 years in power and have connection with organized crime.

“There is no rule of law and EU reforms have no influence on this problem in Montenegro. Our protests are not just for the change of Government, but people want a general change in the country”, Marović explains.

Vlasić: It is of strategic importance that Western Balkans joins the EU

Mirna Vlasić from the Embassy of the Republic of Croatia to the US talked about the experience Croatia had during its accession process. As she pointed out, there were no political clashes in the country. In the negotiation team were members of the government and the opposition as well.

Talking about EU and its support towards Western Balkans’ accession process she says that the EU still supports the accession of these countries.

“Presidency that will come will be also for enlargement, which will be put in its priority. This will also be the case for Croatia. It will not block the countries of the region in their EU path. It is of strategic importance that the whole Western Balkans region joins the EU because it will benefit economically and socially”, states Vlasić.

Hahn: The case of David Dragičević has to be resolved without any further delay