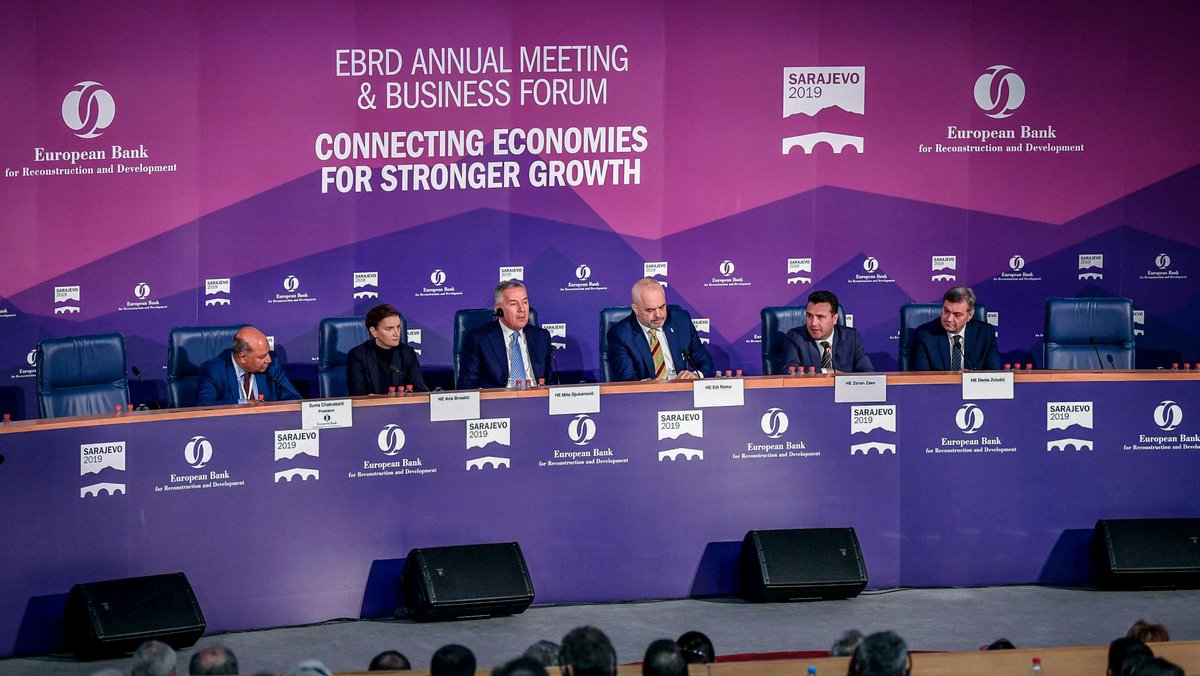 Meeting of governors of the European Bank for Reconstruction and Development; Photo: Twitter / @Zoran_Zaev

SARAJEVO – The annual meeting of governors of the European Bank for Reconstruction and Development (EBRD) in Sarajevo was opened today.

EBRD President Suma Chakrabarti opened the meeting by inviting all to focus on the market-oriented economy.

“Everyone needs to move towards the same vision, to be constructive and progressive”, stated Chakrabarti.

He especially welcomed the fact the leaders from the region are attending the meeting. EBRD President especially addressed to the Prime Minister of North Macedonia stating that if he could, he would give him the Nobel Prize.

Director-General for EU Neighbourhood Policy and Enlargement Negotiations Christian Danielsson strongly welcomed the meeting by telling it is a great opportunity to promote the region’s economic development.

During the discussion at the EBRD Sarajevo forum, Serbia’s Prime Minister Ana Brnabic said that the countries of the region should lead a constant dialogue on the most difficult and most complex issues, reports N1.

“We aim to create a region of open and free trade of goods, services and investments which will also be our preparation for our participation in the single market of the European Union”, underlined Zaev

The Co-chair of the Council of Ministers of Bosnia and Herzegovina Denis Zvizvić welcomed all the participants with the hope his country would be seen as a good investment opportunity, reports N1.

“We are in the phase where we all agree about the things that need to be done in the region, but at the same time we realize it is easier to say it than to do it”, stated the Prime Minister of Albania Edi Rama.

Rama underlines that it is clear that if we want to work regionally we need free trade and a single market and that problems are in the small things, N1 reports.

Marković: Entire region must focus on EU and NATO integration