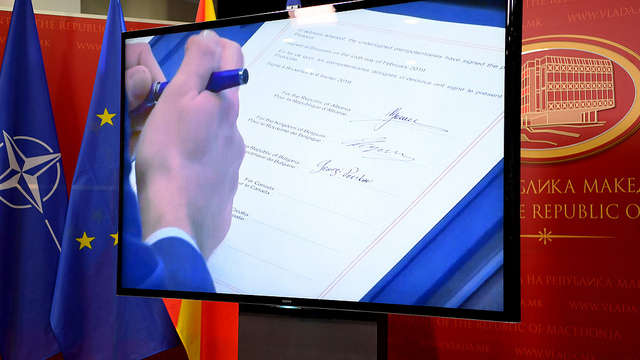 Prespa Agreement; Photo: Government of the Republic of North Macedonia

LONDON – The Prespa agreement is the West’s biggest diplomatic achievement in the Balkans since the US-brokered Dayton agreement that ended the Bosnian war in 1995, writes Financial Times.

Aside from this, FT believes that Prespa agreement could raise hope of progress in tackling other regional challenges, but some caution is in order since each Balkan country is dealing with different issues.

“The Prespa accord will be judged by whether it lays to rest doubts about the long-term stability of the North Macedonian state,” considers FT.

For this to happen, FT believes three steps are necessary.

Firstly, it is stated that the EU must open its doors to North Macedonia and Albania and launch accession talks this year with both states. Secondly, opponents of the Prespa agreement must not seek to discredit it or to destroy it. And finally, Albanian politicians in Albania, Kosovo and North Macedonia should “exercise restraint” when it comes to uniting themselves in a Greater Albania.

“In exchange, however, the EU and regional Balkan politicians, including in Skopje, must reassure all Albanians that their aspirations to prosperity, civil rights and European integration are receiving proper attention. On this, no less than on the Prespa accord, will depend North Macedonia’s wellbeing and even its survival,” writes FT.