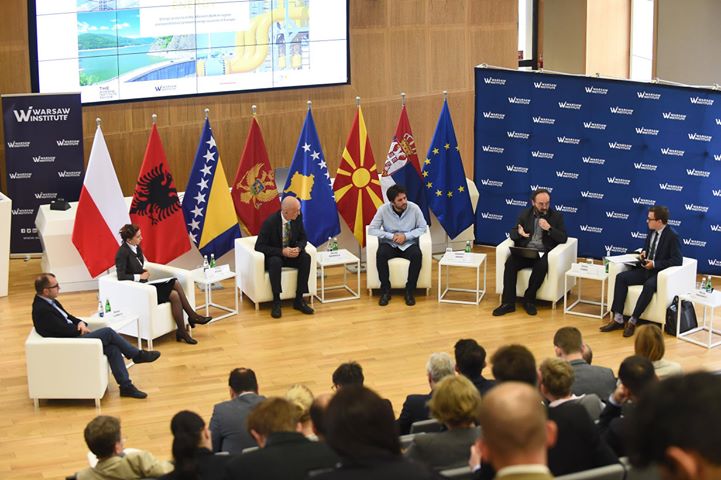 The primary purpose of the conference was to encourage an expert discussion on EU integration processes in the Western Balkan countries in such domains as infrastructure and energy along with the impact exerted by global and local geopolitical processes.

The conference was attended by top scholars and experts, representatives of non-governmental organisations, media and state administration from both the Western Balkans and the European Union.

In his welcoming remarks, President of the Warsaw Institute Krzysztof Kamiński outlined the key topics of the discussion while highlighting the importance of the expert debate on EU integration of the Western Balkans.

In the keynote speech, Deputy Foreign Minister of the Republic of Poland and Plenipotentiary of the Polish Government for the Western Balkans Summit Szymon Szynkowski vel Sęk said that the development of infrastructure and energy sectors in the Western Balkans is of key importance for the European integration process.

He emphasised that Poland is fully aware of the significance of infrastructural connections and networks as it overcame similar development challenges.

Szynkowski vel Sęk underlined that Poland strongly encourages any efforts made to integrate the Western Balkans with the European Union.

Any issues vital for the integration of Western Balkan countries with the European Union were raised during the panel discussions, during which participants spoke about the development of road, railway, aviation, and maritime infrastructure in a regional context.

Also, panellists discussed energy projects in the Western Balkans and possibilities to boost energy security in the region and in Europe. Given an increased activity of multiple international actors in the area, the discussion then addressed geopolitical approaches to the Western Balkans’ cooperation with China, the European Union, Russia, Turkey, the United States, and NATO.

President of the European Movement in Montenegro Momčilo Radulović claimed that the Western Balkans’ infrastructure needs are enormous and cannot be fully financed by EU grants and loans. Despite their will to use the EU financing mechanisms, the Balkan states are pushed to cooperate among others with China to cover their demand for investments.

Given the lengthy EU integration process of the Western Balkans and the lack of understanding from some European partners, the Balkan states expect its EU peers to assume a partnership approach to their integration, which is first to be achieved by tightening economic ties.

Assistant Professor of the Faculty of Political Sciences at the Zagreb University Robert Barić argued that what is the biggest shortcoming of the Berlin Process is that it encompasses both political and diplomatic undertakings, yet fails to offer sufficient infrastructure solution that–once put forward–could exert a positive impact on accelerating integration mechanisms.

Also, he stressed out the importance of Chinese investments in the region under the New Silk Road initiative, referred to as Beijing’s gateway to Europe, pointing to their plausible positive (general infrastructure development in the area, easier accessibility of transport services and market expansion) and negative (no transparency, unclear and unfair economy practices, dependence on Chinese loans and using foreign authority to build political influence) consequences.

“Chinese-funded investments could be referred to as a double-edged sword,” Barić added. Asked about using infrastructure for military purposes, he said that the Western Balkan countries remain focused on developing its infrastructure solely from the economic point of view as a critical factor determining economic security.

President and CEO of IMPETUS Center for Internet, Development and Good Governance from North Macedonia Liljana Pecova-Ilieska familiarised participants of the event with the responsibility held by the Western Balkan states in preparing and implementing further investment projects, arguing that their transparency remains a considerable challenge that needs to be addressed.

Deputy Director of the International Cooperation Department at the Ministry of Infrastructure of Poland Marcin Rzeszewicz provided an outline of Poland ‘s experience as a member of the European Union over the last fifteen years and paid particular attention to the country’s efforts to upgrade its infrastructure.

Having cited relevant statistic data, he informed fellow conference participants that Poland is one of the largest beneficiaries of EU funds in this respect.

He emphasised the effectiveness of Poland’s cooperation with other countries within the structures of the European Union and the Visegrad Group as it allows for pushing ahead significant infrastructure projects of transnational importance, which may be a good sign for the Western Balkan states.

Director of the Department of Sectoral Policies at the Ministry of European Integration of Kosovo Vjosa Beqaj outlined the priorities of the Kosovar government in setting new energy-making capacities with the use of both conventional and renewable sources, also informing that the government has been investigating launching gas connections as the country lacks such infrastructure.

Speaking of regional energy cooperation, Beqaj focused on the need to enhance local coordination provided that the Western Balkan countries seek to both implement legislation and fulfil their obligation under the EU Connectivity Agenda.

As she said, challenges in integrating particular energy markets have arisen from some political reasons, which need to be handled appropriately by individual countries of the region.

While some countries rely on generating electricity from renewable sources, the amount of energy generated does not always comply with local demand, hence a need for importing electricity supplies and enhancing both quality and efficiency of connections between individual states.

Director of the Energy Regulatory Agency from Montenegro Novak Medenica drew attention to short and long-term costs of generating electricity, saying that coal-based energy is far cheaper than renewables and it is easier to use it to boost output capacity yet such a solution entails long-term environmental and health costs.

Journalist at an online platform “Balkan Green Energy News” Vladimir Spasić admitted the Balkans’ privileged position in using renewables as a salient feature to be employed to develop the region and reduce CO2 emissions.

Also, he referred to the plans of Serbian decision-makers to introduce actions allowing faster development of solar and wind energy.

In turn, Energy and Climate Change Program Coordinator of the Center for Ecology and Energy from Bosnia and Herzegovina Denis Žiško argued that the Western Balkan countries should focus on developing both the renewable and prosumer energy sector, saying that it is vital to launch decarbonization processes to drastically reduce harmful CO2 emission.

In his closing remarks to the second part of the discussion, Zaniewicz referred to three crucial areas of energy challenges of the Western Balkan states, among which were their high reliance on coal, cooperation between particular energy regulators and allowing coherent coordination of energy connection to be managed by grid operators.

Jakub Lachert, an expert of the Warsaw Institute and a co-author of the conference report, outlined the main geopolitical challenged that need to be addressed by the Western Balkan countries as well as he concentrated on an impact exerted by global and regional players.

Marija Jankuloska a researcher at the Euro-Atlantic Council of North Macedonia, who later took the floor, said that it was in NATO’s interest to attract new members. While Albania and Montenegro, both of which have joined the Alliance, and North Macedonia–which hopes to accede to the organisation sometime in the future–agree over the direction assumed by transatlantic integration, other countries of the region either oppose the plan or struggle with too many difficulties to be able to join the NATO structures.

For countries that welcome NATO’s presence in the area, their integration with the Alliance safeguards their security to a greater extent than in the case of their ties with the European Union.

Assistant editor-in-chief of the Kapital magazine Igor Petrovski drew attention to the long-term efforts made by the Western Balkans to tighten EU integration, saying that – despite many bids – the European Union has delayed the process of admitting the six Balkan states into its own community, which sparked off impatience and frustration across the region.

To make matters worse, this has given both political and economic ground for other players, including Russia, Turkey, and China, to expand their own influence in the area.

Resident Country Director in Bosnia and Hercegovina at International Republican Institute Borislav Spasojević spoke about the role played in the region by the United States from the 1990s until now. As he said, Washington remains focused on the area while undertaking diplomatic efforts yet avoiding direct actions, primarily if they refer to the Serbian-Kosovo conflict.

Director of the Institute for National and International Security (INIS) Darko Trifunović said that the Western Balkans needed to face a number of threats posed by Russia, including disinformation, media activities, harmful influence, dishonest and unclear economic practices, terrorism and attempts to meddle into other states’ domestic affairs, as exemplified by the attempted coup in Montenegro.

Speaking of the latter event, he outlined efforts made by the government in Podgorica to join the Alliance, choosing first to integrate with NATO and then with the EU. While referring to geopolitical influences in Serbia, he said that “neutrality is very expensive” when it regards security issues. Serbia has turned down an invitation from NATO in a bid to remain a neutral state.

Under the hybrid warfare, which is, according to the expert, now taking place in the area, the country needs the region’s solidarity in order not to become “a Russian foothold in a Europe full of missiles.” Last but not least, he added that “Serbia is under no illusions that, once deprived of European help, it will lose to Russia and it is unlike to be granted such support.”