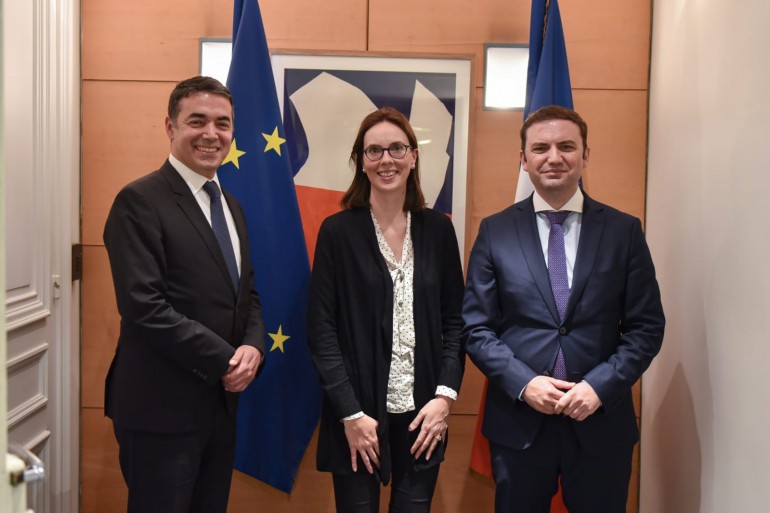 PARIS – Minister of Foreign Affairs of North Macedonia Nikola Dimitrov and Deputy Prime Minister responsible for European Affairs Bujar Osmani visited Paris yesterday to discuss opening of EU accession negotiations with the country that seems the most reluctant to support the move.

During the visit, Ministers met with Secretary of State for European Affairs Amelie de Montchalin and Counselor for Europe at the cabinet of President Emmanuel Macron Clement Beaune.

The decision on whether to start membership talks with North Macedonia and Albania is expected to be made at the EU Ministerial meeting on 18 June, but France remained undecided, Politico reports.

According to the unnamed government official who spoke to the Brussels-based portal, France does not want to give the impression that it is only concerned about the enlargement, instead of deepening the EU first.

On the other hand, Minister Dimitrov also gave a statement to the Politico, arguing that the enlargement to North Macedonia is in the Union’s best interest.

“My job is to make it clear that it will be difficult to be seen as a country that has an ambition to lead Europe and shape Europe and at the same time be a country that misses opportunities for success in Europe,” Dimitrov said.

During the meeting with French officials, Dimitrov and Osmani emphasised the importance of the latest EU Commission Report on North Macedonia, published on 29 May.

According to the Ministers, the document reflects the level of reforms achieved during the past year with precision and clearly recommends the start of accession negotiations with the country.

Is Kosovo ready to read the Country Report 2019 correctly?