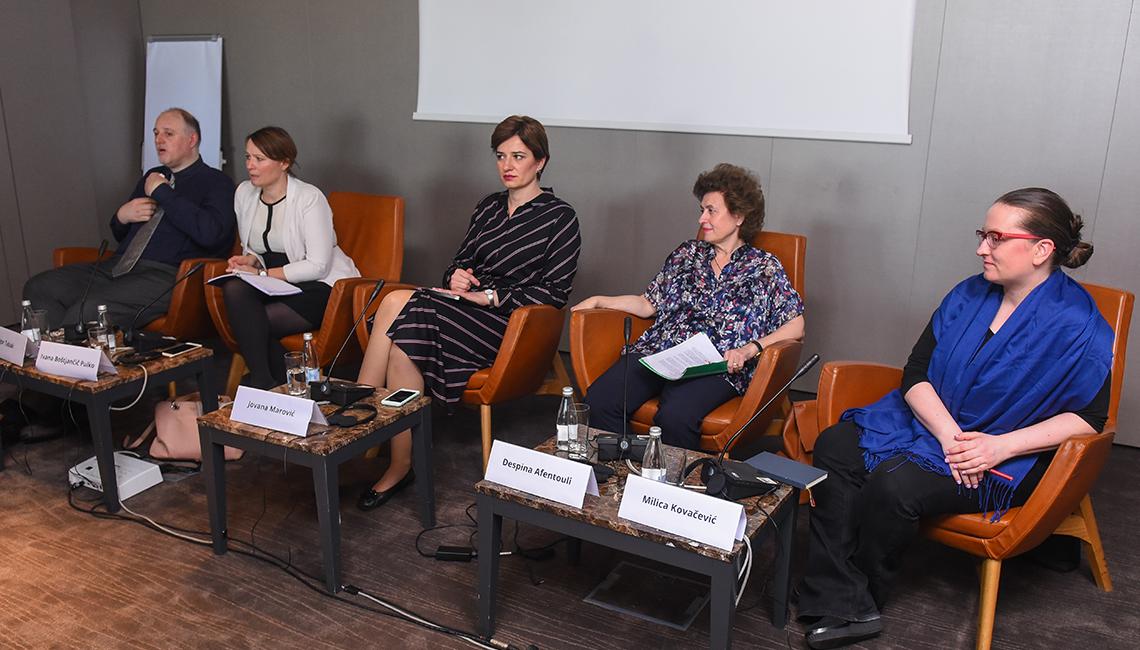 PODGORICA – The security of the Western Balkans will be weaker without a clear EU perspective, because regardless of the fact that Montenegro is a NATO member, only the EU framework enables the strengthening of the rule of law, which is the beginning and the end of the story in relation to the resilience of states to hybrid threats.

This was assessed by Executive Director of the Politikon Network, Jovana Marović, at the panel discussion ”New Perspectives on Shared Security – NATO’s Next 70 Years,” organised by Politikon Network.

Marović said that it is extremely difficult to define hybrid threats and that, as she said, the fight is more complicated and uncertain.

“We have agreed that it is necessary to further strengthen the analytical capacities within the NATO member states, in the sense that there should be research units that would deal with hybrid threats and security challenges on a daily basis in the member states themselves,” Marović explained.

She said that when it comes to hybrid threats and security challenges, cooperation between the EU and NATO needs to be intensified.

“We in the Western Balkans have recognised the need for regional cooperation. Cooperation of the police is important, as well as the cooperation of other bodies and exchange of information,” said Marović.

According to her, disinformation is one of the main hybrid threats and, as she explained, it is necessary to recognise the importance of media literacy at early stages.

She pointed out that when there is a rule of law it is much easier to control financial flows and transactions related to the interest of non-Western countries.

“We concluded that, as far as the security of the Western Balkans is concerned, it will be weaker, if it does not have a clear perspective of EU membership. Because, despite the fact that Montenegro is a member of NATO, it is not free from hybrid threats and the impact of foreign actors, and the state of rule of law is worrying, since corruption is present at all levels, and problems with organised crime are immense. In this sense, we believe that only the EU framework enables the strengthening of the rule of law, which is the beginning and the end of the story in relation to the resilience of states to hybrid threats,” Marović pointed out.

The Program Manager of the Department of Public Diplomacy at the NATO Alliance, Despina Afentouli, said that the achievements of the Alliance during the last 70 years must be recognised.

“We have to say what we did well and what can be improved in the future. Many countries want to join NATO and this is an indication of the healthy foundations of this Alliance,” Afentouli said.

She said that September 11 drastically changed the world scene and that the emergence of terrorism had to deal with another set of threats and challenges.

“The international community has done the job properly. Of course, threats have not been eliminated, but today they are not at the same level as they were in 2001. We have done a lot to fight the trail of terrorism, radicalism and violent extremism, and today these are phenomena that do not exist to the extent that it was the case,” Afentouli said.

After the 2014 Crimean annexation, she said Russia is aggressive and unpredictable.

“Aggression is manifested and we are dealing with it in a way that protects members who feel exposed to Russian threats,” Afentouli said.

The president of the Center for Democratic Transition (CDT), Milica Kovačević, assessed that unity and cohesion were easier to accomplish in the blocked sub-world, where we had “good and bad guys”.

“Today, it is more difficult to achieve a balance, because different members have different interests within different centres of power and influence,” said Kovačević.

She said that there is a need to strengthen partnerships outside NATO, which, she added, is above all a partnership with the EU.

Analyst of the Obris portal from Croatia, Igor Tabak, explained that NATO and the EU are not mechanisms for themselves, but they depend on the fact that members need to remain active, to work, to invest and it is not easy.

“NATO is an opportunity to work and, in contact with allies and then you can specifically ask them to help you with a specific problem. These are the things when you recognise a specific problem when they help you to find a concrete solution,” Tabak said.

Director of the “Peace and Security” program of the Centre for European Perspective from Slovenia, Ivana Boštjančič Pulko, said that Slovenia is a unique country because it is one of the world’s safest countries and in a complex security environment it is extremely commendable that the perception of threats in Slovenia is reduced.

“So Slovenians are not afraid of many things, which is nice if you live in Slovenia, but on the other hand they have strategic challenges when trying to establish a national security framework,” said Boštjančič Pulko.

She pointed out that Slovenia was under great influence of economic crisis, and in the budget funds allocated for defence there was a reduction and “we are still trying to change this trend today”.

“Last year we adopted a regulation on cybersecurity and information security. We have a new body, which will be independent, which will deal with cyber and information security. Hybrid threats are still at the level that the Ministry of Defence of Slovenia can manage. However, we have the National Security Council, which is a body that does not cover only civil society, but other ministries. When it comes to hybrid threats, we need to have a comprehensive approach,” said Boštjančič Pulko.