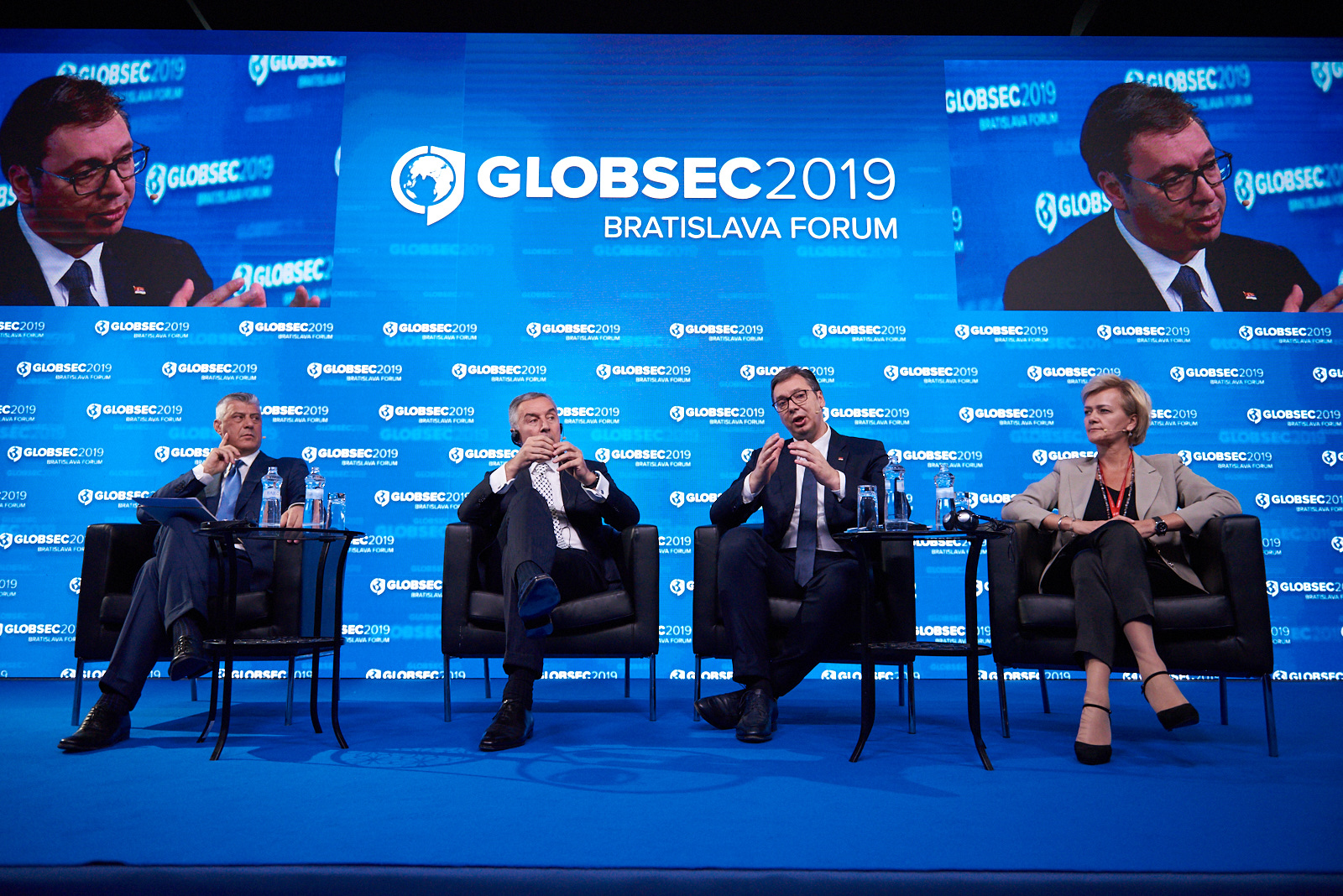 Belgrade - Pristina Dialogue: Getting to the Core; Photo: GLOBSEC 2019

BRATISLAVA – It is in the interest of both Kosovo and Serbia to reach an agreement as soon as possible, it is concluded on the panel Belgrade-Pristina Dialogue: Getting to the Core, held on Friday at GLOBSEC forum in Bratislava.

President of Serbia Aleksandar Vučić and President of Kosovo Hashim Thaçi explained the positions of their countries when it comes to Belgrade-Pristina dialogue.

President of Serbia, Aleksandar Vučić pointed out that Serbia is trying its best to arrange a possible deal with Pristina, and that so far, they were not able to do it, and the current situation is not promising.

“If you ask me about possible perspectives, I am very much pessimistic, but it does not mean that all of us are not going to do our best to keep the peace, stability and tranquillity within the region and at the same time trying to find a possible solution,” says Vučić.

He adds that this position places both sides in a difficult situation and the positions of other countries towards this issue are polarised.

“Half of the world have recognised Kosovo’s independence, and the other half did not do it so far, and there is no further intention of doing so. It means that we need to find a solution. If the political situation today is that bad that we are not in a position to solve this issue, other, more responsible people will have to do it in the future,” states Vučić adding that they need to find a solution and it has to be a solution in which both sides will make compromises.

Ahead of the Summit of the leaders of the Western Balkans which will take place in Paris in July, Kosovo has high expectations when it comes to the Belgrade-Pristina Dialogue.

“I hope that the Summit in Paris will be decisive for a positive turn for the agreement, for which we worked very hard. I believe this agreement can be reached in 2019,” says Thaçi, adding that this process represents a certain dialogue marathon.

President of Kosovo stresses that the dialogue is now in crisis. However, he points out that it is really important and encouraging that more than 70 per cent of citizens of Kosovo want to have a dialogue and reach a final agreement between Kosovo and Serbia.

He adds that there are divergent opinions in Kosovo, just like in Serbia, but the objective is the same – the possibility of reaching a comprehensive agreement.

“We need a final agreement that will close all open issues between Kosovo and Serbia, which will be legally binding that will preserve and further cultivate multiethnic character and reality of our societies and of our countries,” Thaçi explains, pointing out that this agreement does not mean borders along ethnic lines, but it means that agreement will be concluded with mutual recognition.

Thaçi says that the possibility of reaching such an agreement will bring more peace and stability in the whole of the Western Balkans and it will open a safe way even for Bosnia and Herzegovina, for European perspective.

“This agreement would bring the recognition of five Member States that have not recognised Kosovo yet, and would open a safe way for Kosovo to become a NATO Member, but also of Member of the EU and UN,” explains Thaçi.

However, Thaçi says that there can be no dialogue if the process is conditioned, which is the thing Serbia is doing.

“I believe that in the following weeks we will create a more positive environment to overcome these obstacles that we have in front of us, to continue the dialogue. The Paris summit can be a real opportunity to continue with concrete steps towards the final agreement between Kosovo and Serbia. The objective is far greater than the obstacles we are facing,” noted Thaçi.

When it comes to the tariffs Kosovo imposed on goods from Serbia, Vučić explains that Serbia did not do anything wrong and did not put people of Kosovo in jeopardy.

“Serbia only did its job by fighting against the membership of Kosovo to Interpol and UNESCO, because we do not recognise and we do not see Kosovo as an independent state. The only issue is that we do not agree with them on the status of Kosovo,” explains President of Serbia, adding that due to imposed tariffs, seven months later, Serbia lost 300 million euros so far and that it is absolutely against CEFTA Agreement that Kosovo signed.

Vučić stresses that Serbia is ready to start the talks immediately on removing the tariffs.

President of Montenegro Milo Đukanović says that this issue Serbia and Kosovo have is burdening for the entire region.

“It is of historical importance that Vučić and Thaçi have decided to start the dialogue. This question has to be solved soon and we have to treat it as a bilateral question and also as a question that is important for regional stability and for Europe,” Đukanović says.

He also believes that Europe has to recognise its responsibility in this matter.

Angelina Eichhorst, Deputy Managing Director for Europe and Central Asia, Director for Western Europe, Western Balkans and Turkey at the European External Action Service, explains that solving this issue could have a resonating effect on the whole region, adding that this is of crucial importance for the EU.

“The EU is not a mediator, but a facilitator of the dialogue which means that this dialogue is held by two parties, Kosovo and Serbia, and they have to find a win-win solution,” says Eichhorst.