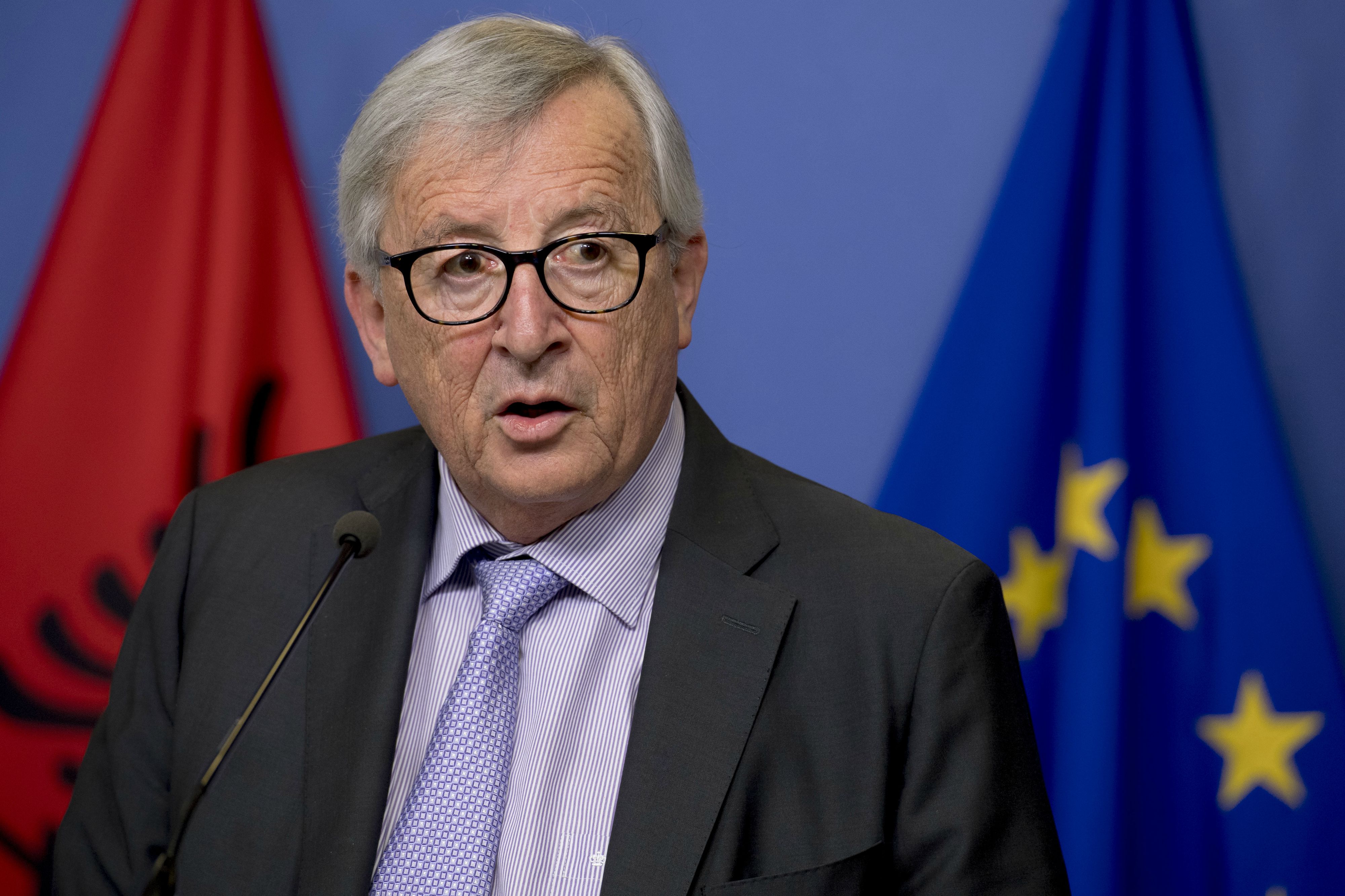 BRUSSELS – As today marks thirteen years since Albania and the EU signed the Stabilisation and Association agreement, we can say Albania made tangible progress and it should be given a green light to start negotiations with the EU, concluded the Prime Minister of Albania Edi Rama and the President of the European Commission Jean-Claude Juncker.

“Albania made considerable progress on this road towards the EU. This is a testament of a determination and strength of the Albanian people and personal commitment to the reforms of the Prime Minister,” said President of the European Commission Jean-Claude Juncker at the joint press conference on Tuesday.

Juncker mentioned that 88% of citizens of Albania have a positive feeling about the EU and that 92% share the goal of the EU membership, which makes Albania one of the countries in Europe with the strongest support towards the Union.

He noted that the Commissions Report on Albania published last month shows that Albania has delivered deep and meaningful reforms in the judiciary system and that there has also been progress when it comes to the fight against corruption and organised crime, as well as in the reform of public administration.

“Fight against corruption and organised crime is of paramount importance to the Member States of the European Union. The vetting of judges and prosecutors has given a tangible result with 140 cases now completed,” Juncker explained.

He pointed out that almost 80% of Albanians supports the reforms and the majority of them believe that this brings positive results to their own lives.

“This is what the reforms are ultimately about. They are not made for the benefit of the European institutions of fulfilling the criteria, they are done for the people of Albania, to live in a fair society where the rule of law is respected and justice system is trusted,” he said.

The decision on opening negotiations with Albania in the following months, rather in June

Juncker explained that any decision on the opening of the negotiation is based on merit and tangible results in the necessary areas, adding that for the European Commission based on an objective assessment Albania is ready for the next step.

However, he noted that there are some obstacles to overcome as some Member States are not in favour of opening the negotiations with Albania, pointing out that some of them have concerns about certain areas.

“The work does not stop in June, regardless of the decision of the Council of the Ministers,” said Jean-Claude Juncker.

The Prime Minister of Albania Edi Rama agreed with the President of the European Commission, saying that the Commission’s recommendation to open negotiations represent an objective view and acknowledgement of the tangible results, but that it is time for Europe to do their part.

Regardless of the decision on starting the negotiations, Rama said that the reforms are not done because the EU expects of them, but because of the citizens of Albania.

“We count on your support, loyalty and friendship, but we believe that until the moment when the decision will be taken everyone will be on board and that the EU will give to Albanians what they deserve,” Rama said.

When it comes to convincing those Member States which are reluctant of the opening negotiation process with Albania, and with Germany, France, Denmark and the Netherlands opting for the decision to be taken in October, rather than in June – Juncker said it is not a “mission impossible”.

“We have to explain to those who are reluctant, mainly for domestic reasons why do we think it would be worth it to open negotiations in the coming months. I am not focusing on June, because of the parliaments which are not in session in June. It could be later, but we have to make it crystal clear that the moment has come,” said Juncker.

Juncker on cancelled elections in Albania: It could postpone European perspective of Albania

The current political situation in Albania is worrying the EU, as the President of Albania, Ilir Meta announced on Monday that he will cancel the local elections scheduled for June 30. Meta explained that this decision came after opposition parties announced they will not participate in the elections, which would make the elections “fictitious and false”.

The President of the European Commission stressed that people should not be prevented from exercising their democratic rights.

“You cannot block the expression of the people of Albania. I think that elections should take place as planned. If they do not take place, it could postpone European perspective of Albania,” Juncker said.

Rama reiterated that elections should be held on time and that no one should be prevented from participating in the elections.

Babiš: EU leaders to keep their promise and start negotiations with North Macedonia